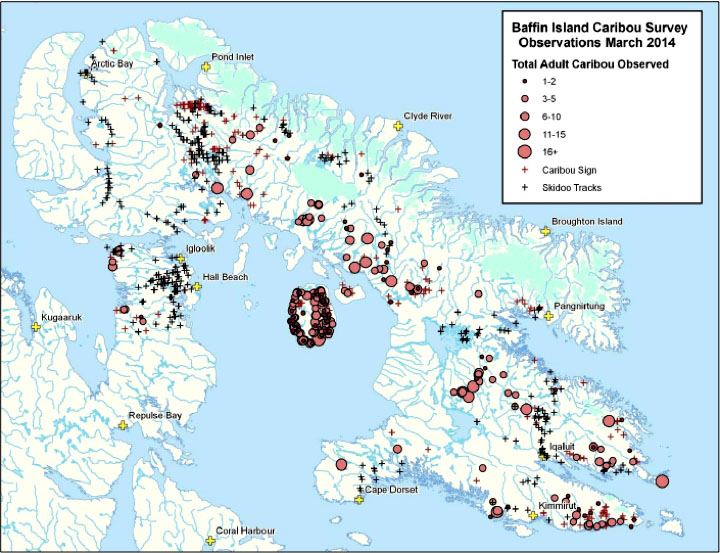 With a hunting moratorium now in place for caribou on Baffin Island as a stop-gap measure to protect the dwindling herds, the Nunavut Wildlife Management Board now must consider a long-term plan for the eastern Arctic’s iconic species and long-time provider of country food.

Individuals or organizations who want to offer written submissions have until day’s end Feb. 13 to do so.

On Jan. 1, the Government of Nunavut imposed a ban on hunting caribou on Baffin Island because of drastically low numbers of animals recorded during extensive aerial and ground surveys in February and March 2014.

According to a comprehensive summary of those surveys compiled by GN biologist Mitch Campbell and recently submitted to the NWMB for consideration, observers saw 1,145 caribou on Baffin and, from those observations, estimated a total of between 3,462 and 6,250 animals.

For North Baffin, observers estimated a paltry 97 to 521 animals on the Borden Peninsula and in the areas of Mary River and North Central Baffin which includes Clyde River.

Under the Nunavut Land Claim Agreement, the GN’s environment minister can make an interim harvesting decision due to ”urgent and unusual circumstances,” which is what Johnny Mike did just before Christmas 2014.

Hunting caribou on Baffin Island is currently prohibited and those found in violation of the ban could be charged or fined. Hunters who earn a living off hunting, or who rely on caribou for food, are not entitled to compensation under the ban.

“The interim moratorium is in place until further notice and co-management partners are working together to develop a long-term Baffin Island caribou management plan for spring 2015,” Campbell said in his summary.

Residents and other stakeholders now have a chance to provide input into that management plan which will govern how the barren-ground species will be treated over the coming years to “reduce the chance of eliminating caribou from areas of Baffin Island,” Campbell’s submission says.