Step one: reach out to territorial, provincial and regional governments 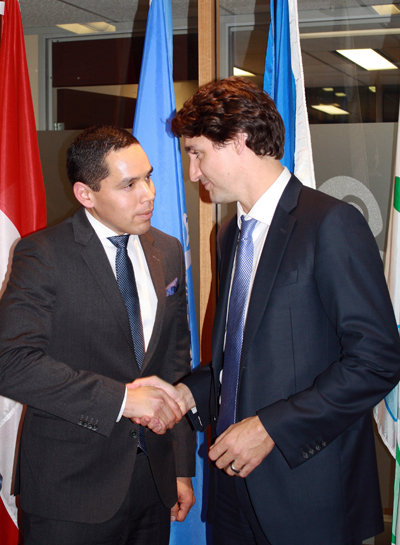 Maybe you’re cynical about “committees.” Maybe you think those who work at the many entities involved in the governance of northern Canada spend way too much time talking and not nearly enough time acting. And maybe you think all those big shots you hear about in the media are all out to get you.

You can think what you want. But there’s no doubt the Feb. 9 signing of the Inuit Nunangat Declaration on Inuit-Crown Partnership represents an important gesture on the part of Justin Trudeau’s Liberal government, even if its potential outcomes are still uncertain.

It means the leaders of Canada’s representative Inuit organizations will sit face-to-face, as equal partners, at least twice each year with those federal cabinet ministers whose work most affects the well-being of northern Canadians.

This past Dec. 15, the first anniversary of the final report of the Truth and Reconciliation Commission, Trudeau announced his government will work out these bilateral structures with Inuit Tapiriit Kanatami, the Métis National Council and the Assembly of First Nations.

At the time, leaders of all three organizations heaped praise on the idea in sometimes gushing terms. But the four Inuit regions of the Canadian Arctic are likely the biggest winners, because Inuit comprise only four or five per cent of the total Indigenous population living inside Canada’s borders and the declaration helps overcome the disadvantages of being part of a tiny population.

That includes many mid-level federal civil servants. As a result, Inuit regions have sometimes been overlooked in the design of federal programs for Indigenous people, including programs related to housing, health, post-secondary education and infrastructure.

So there’s no doubt the Inuit-Crown partnership, as far as it goes, represents a net gain for the four regions of Inuit Nunangat. But at the same time, there are some obvious pitfalls the Trudeau government must watch out for in the near future.

One is that in some cases, such as Nunavut Tunngavik Inc. and the Qikiqtani Inuit Association, these organizations can make only a tenuous claim to political legitimacy. The best evidence for this is supplied by the woeful turnouts for their elections, which rarely rise above 30 per cent.

Another is that, with the exception of the Nunatsiavut Government, these representative organizations are not governments. Most of the Inuit leaders who are part of the Inuit-Crown working group don’t operate schools, hospitals, colleges, welfare programs or social housing. Most don’t aspire to be treated as governments, except when it comes to getting handout money from Industry Canada.

On some issues, such as reconciling the wrongs of the past, Ottawa can act alone, because for the most part, it’s federal officials who are responsible for inflicting the damage.

But the most forward-looking goals of the Inuit-Crown declaration are aimed at increased prosperity and reduced inequity. To get that done, the governments of Nunavut, the Northwest Territories, Quebec and Newfoundland-Labrador must be brought into the heart of the process.

A third pitfall is this: Inuit organizations themselves are divided among themselves on non-renewable resource development, an activity directly related to prosperity, a word that appears twice in the text of the declaration.

For example, when Nunatsiaq News contacted Makivik Corp. to get their reaction to Trudeau’s Dec. 20 ban on future Arctic offshore oil and gas permitting, a Makivik spokesperson described the announcement as “great news.”

But on the other side of the Canadian Arctic, the Inuvialuit Regional Corp., which for years has pinned its economic hopes on oil and gas, denounced the absence of consultation, as have all three territorial premiers.

“This lack of meaningful communication is startling given your government’s stated commitment to improved Inuit-Crown relationships,” IRC president Duane Smith said Jan. 12 in a letter to Trudeau.

It’s clear that Trudeau’s reconciliation agenda is based on a form of elite accommodation: striking deals with leaders of the national Indigenous organizations. That’s a reasonable strategy as far as it goes.

But if last Thursday’s Inuit-Crown declaration is to have meaning for people at the grassroots, Trudeau and his cabinet have their work cut out for them. And step one means reaching out to territorial, provincial and regional governments. JB