The jewel of Canadian Arctic research remains under wraps 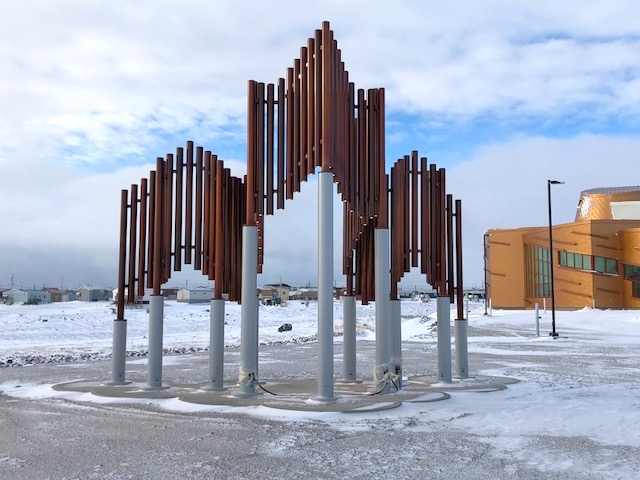 The 5.5-metre, copper-piped “Polar Iconic Structure” in front of CHARS, by Edmonton graphic designer Wei Yew, incorporates a maple leaf to symbolize Canadian sovereignty over the North—and is intended to conjure up the northern lights. It reportedly cost about $1 million. (PHOTO BY JANE GEORGE) 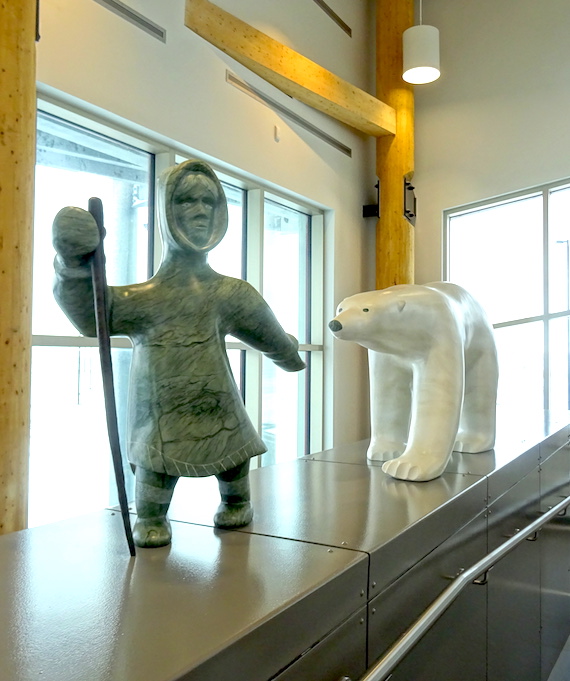 This piece by Koomuatuk (Kuzy) Curley of Cape Dorset is named Ningiuq amma Nanuq (Elder and Polar Bear). It portrays the story of a grandmother who adopted a bear cub, which then grew up. “The carving is about elders and how they guide us with their knowledge,” Curley said in submitting his design. “Science is not new to the Arctic. It began long ago, with Inuit ancestors observing the world and sharing their thoughts with younger generations. Today, elders continue to urge traditional and modern knowledge to move forward, guiding the powerful force of Inuit culture like the elder in this carving leads her bear. Inuit have a strong relationship with the nanuq. They respect them for their strength, and as the most powerful hunters on land and sea. In the past, Inuit would adopt polar bears. (PHOTO BY JANE GEORGE) 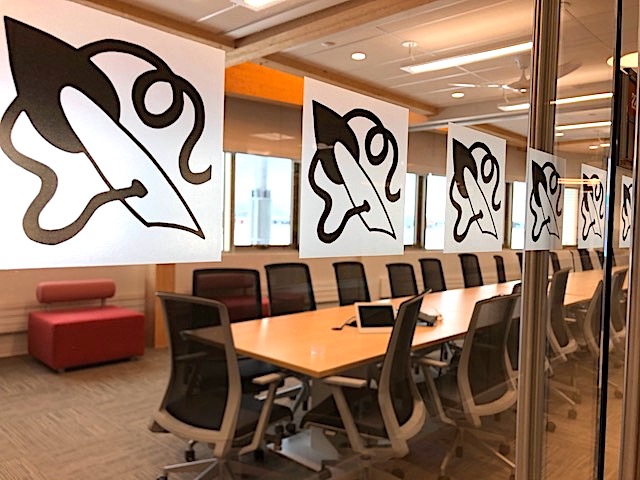 The main science building’s board room features an extremely long table, which appears able to seat more than 20. On the window of the glass wall, you can see a design by Vicky Grey of Kangirsuk. For this and other artwork in the building, there were two pan-northern competitions on the theme “Honouring the timeless creative genius of the Inuit.” (PHOTO BY JANE GEORGE) 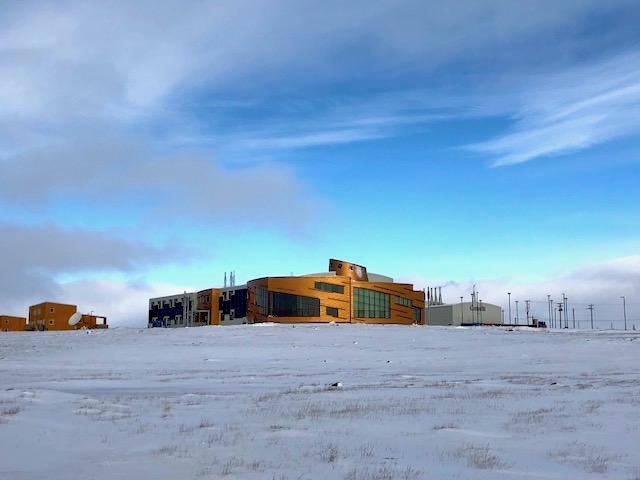 The Canadian High Arctic Research Station stands on a hill outside Cambridge Bay. While the facility remains closed to the public, some 43 science and technology and knowledge management projects have received money from the Polar Knowledge Canada for 2017-19. (PHOTO BY JANE GEORGE)

CAMBRIDGE BAY—When the low-lying sun strikes the Canadian High Arctic Research Station in Cambridge Bay at this time of year, it looks like a big, shiny, copper-coloured treasure chest.

But, unless you’re working at CHARS, you can’t see what’s inside this striking $200-million complex.

The main science building, at 7,900 square metres, with its stunning gems of Inuit art and interior design, part of which is supposed to be open to the public, remains closed.

Although the building been occupied by staff for months, there’s still no official opening date set for CHARS, although some people in this western Nunavut community of about 1,700 people did get a chance to visit during a July open-house event.

CHARS, which also includes a massive maintenance building, said to be the largest building in the Arctic, and two residential triplexes, was first set to open on July 1, 2017, with Prime Minister Justin Trudeau in attendance.

That opening was then delayed to October 2017, then to November after the Nunavut election and again to February 2018, in conjunction with the Kitikmeot Trade Show.

In late September, Lynn Berrouard, the external communications manager for Polar Knowledge Canada, said “while limited operations are already taking place at the CHARS campus, the date of an official opening has yet to be set.”

Chief among those delays in moving to an official opening appears to be a major administrative and legal complication.

The Federal Real Property Act had to be amended to allow Polar Knowledge Canada, which oversees CHARS, to be treated as a Crown corporation for the purpose of assuming ownership of CHARS.

“We have to make a distinction between the organization and the building. The organization, moving forward, will be, and continues to be, a departmental corporation. For the purposes of taking on the legal title of the building, under the Federal Real Property and Federal Immovables Act, it will be considered a Crown corporation,” said Wayne Walsh, who is the director general of Northern Affairs, then under Indigenous and Northern Affairs Canada, speaking to a Senate committee on the Arctic last May.

That amendment, according to an online copy of the act, looks like it was done in June, fixing a legal loophole in the original drafting of the CHARS Act in 2014.

But the transfer of ownership hasn’t taken place yet, a media spokesperson from Crown-Indigenous Relations and Northern Affairs Canada told Nunatsiaq News Oct. 2.

“While plans to transfer the asset from Crown-Indigenous Relations and Northern Affairs Canada to Polar Knowledge Canada have commenced, the final transfer of the lands and campus cannot take place until full substantial completion is achieved, said Stephanie Palma.

While closed to the public, CHARS has the money to keep the heat and lights on.

The total operating cost of the physical campus is currently estimated to be about $7.1 million a year. That covers several million dollars worth of fuel to heat the campus, as well as contracts for maintenance and other consumables.

“Our overall budget for the organization (Polar Knowledge Canada) is now approaching $29 million per year,” David J. Scott, Polar Knowledge’s president and CEO at that same Senate hearing last May. “So approximately 25 per cent of our overall budget, as we move forward, will be operating costs of the physical infrastructure on the research campus in Cambridge Bay.”

About $300,000 a year goes for an internet connection via satellite, he said.

Public use of the main building is planned for, Scott also said in May, adding that “an important feature that distinguishes this research facility from all others in the polar regions in that it is welcoming of members of the public; is not limited to scientific expeditioners only.”

CHARS also plans to work in partnership with Nunavut Arctic College’s Environmental Technology Program through use of the GIS, or Geographic Information Systems laboratory, he said.

The projected total number of staff for CHARS is 58, although in May that number stood between 45 and 50, with only about half the staff actually working in Cambridge Bay.

“The remainder are here in the Ottawa office,” Scott said.

That’s hardly the local job bonanza that many hoped for, but to date, the CHARS construction gave $58 million to an Inuit benefits plan through contracting, employment and training.

For now, the main science building’s doors remain locked, even if everything inside is spotless, ready and set to go.

A tour provided to Nunatsiaq News by an employee of Polar Knowledge, that oversees the complex, did provide a look at the impressive work from Inuit artists which adorns the expansive public spaces of the main science building.

There are carvings by many well-known Inuit artists, such as a polar bear by Puvirnituq’s Peter Bay Ittukalak and another of an elder and an alabaster polar bear by Kuzy Curley of Cape Dorset, along with floor art work by Sammy Kudluk of Kuujjuaq and by the late Tim Pitseolak of Cape Dorset. The elders of the Kitikmeot Historical Society also made a series of large wall-hangings.

The public area, dubbed the Knowledge Sharing Centre, also contains a circular space for talks or films, a translation booth, fully-equipped radio broadcast room, a large, open seating area, a kitchen, coffee area, empty laboratories, and a board room that looks as if it could accommodate the entire Nunavut legislature. 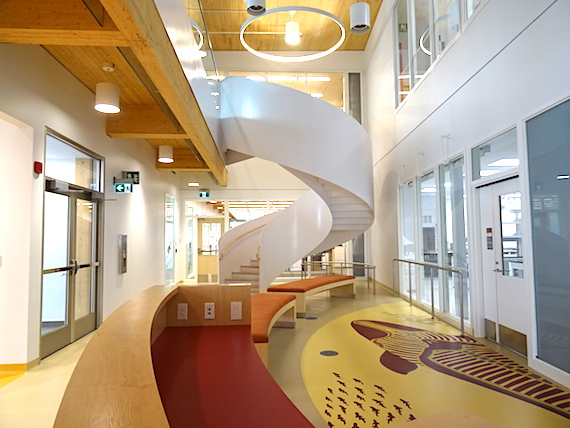 A spiral staircase beckons upward at the end of this unoccupied hall on the first floor of the main science building. The artwork on the floor, “Beluga whales and a bowhead,” was the last major piece done by Tim Pitsiulak of Cape Dorset before his death in December 2016. (PHOTO BY JANE GEORGE)