“The jury’s out” on oil and gas development in the Arctic: ICC leader

“We all agree that development must be sustainable” 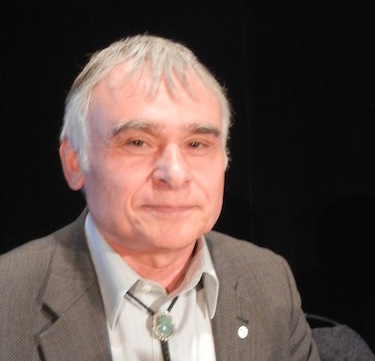 MONTREAL — Don’t say I want to see a moratorium on offshore gas and oil development in the Arctic, says Jimmy Stotts, the president of Alaska’s Inuit Circumpolar Council.

But you could say he’d like to see a “time out” in the rush towards offshore gas and oil development in the Arctic.

Otherwise Inuit, who intended to survive with their culture intact, will have trouble sustaining their culture, Stotts said April 25 at the International Polar Year Conference in Montreal.

Money isn’t the solution to many of the problems Inuit face, he said during a conference panel on “creating the conditions for Arctic offshore gas and oil development.”

“The situation is each of the three countries is different for Inuit, with different political and economic circumstances,” Stotts said. “But we all agree that development must be sustainable.”

Inupiat from Alaska think gas and oil development can be “done right” on land, said Stotts, a former ICC president.

Stotts, along with John Amagoalik, Mary Simon and Aqqaluk Lynge of Greenland, sat on the first executive of what was then called the Inuit Circumpolar Conference in 1980, where he represented Alaska.

But today Stotts says “we’re not convinced that industry and government are ready to take this adventure into the Arctic Ocean.”

There are too many risks and too many unknowns.

“No one is prepared to move into the Arctic offshore yet. It’s just too risky. We need to take the time to get it right,” he said, calling for industry and governments to pay attention to the concerns raised in a recent report by the insurance company Lloyds of London which, among other things, looked at the risks in Arctic offshore drilling.

The Lloyds report shows there’s concern about insuring offshore oil drilling operations, which could include the costs of dealing with a blowout, capping a well, redrilling, and cleaning up pollution and seepage.

Stotts would like to see more attention paid to the suggestion to create an Arctic oil spill contingency fund, so that if there’s ever an Arctic spill, the money will be there to help clean it up.

But, in addition to the environmental concerns, there are cultural and social concerns about the boom in oil and gas development, Stotts said.

Inuit also want to be able to benefit and “to survive and thrive culturally,” he said.

The deterioration of the Inupiat language and social problems seemed to go hand in hand with the first wave of resource development on Alaska’s North Slope, he said.

“It did improve our lives, but there is a cost to that — our young people can’t speak our language as they used to and there are health issues which I would say came with this material wealth,” he said.

The oil company Shell has paid for the development of a Rosetta language-learning program in Inupiat, Stotts acknowledged, but “the jury is still out” about the real benefits of oil and gas development, Stotts said.

Industry representatives from Shell International and Chevron Canada, who participated on the same panel as Stotts, said oil companies have made a “massive effort” to improve their standards and readiness since the Deepwater Horizon blowout in 2010. In the Arctic, their companies would only plan to drill in the summer to avoid the hazards caused by ice.

During the panel discussion, fossil fuels and their relation to global warming didn’t come up.

No one mentioned the contribution of oil and gas companies to climate-warming greenhouse gas emissions until a commenter from Greenpeace said he found it ironic that “industry caused the problem [of global warming] and now they’re going to the Arctic” to make it worse.