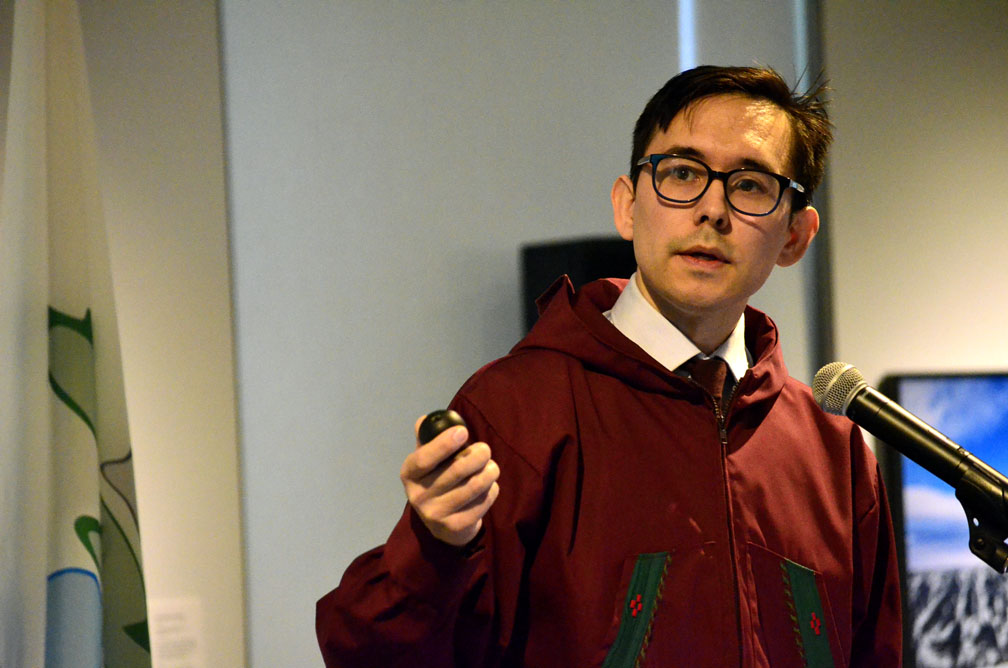 Timothy Argetsinger, a special advisor to the ITK president, does a presentation on the National Inuit Strategy on Research at the Canadian Museum of Nature in Ottawa last week. (PHOTO BY JIM BELL)

OTTAWA—This past Thursday, Natan Obed, the president of Inuit Tapiriit Kanatami, stood inside one of Canada’s natural science shrines, the Canadian Museum of Nature, to declare that Inuit want a direct say over research done in their homelands.

“There has been an imagination that there has been a blank space in Inuit Nunangat that is filled by people who are explorers, who are saviours, people who come in and explain the world to us, or explain our world to the rest of society in a way that we could never do ourselves,” Obed said. 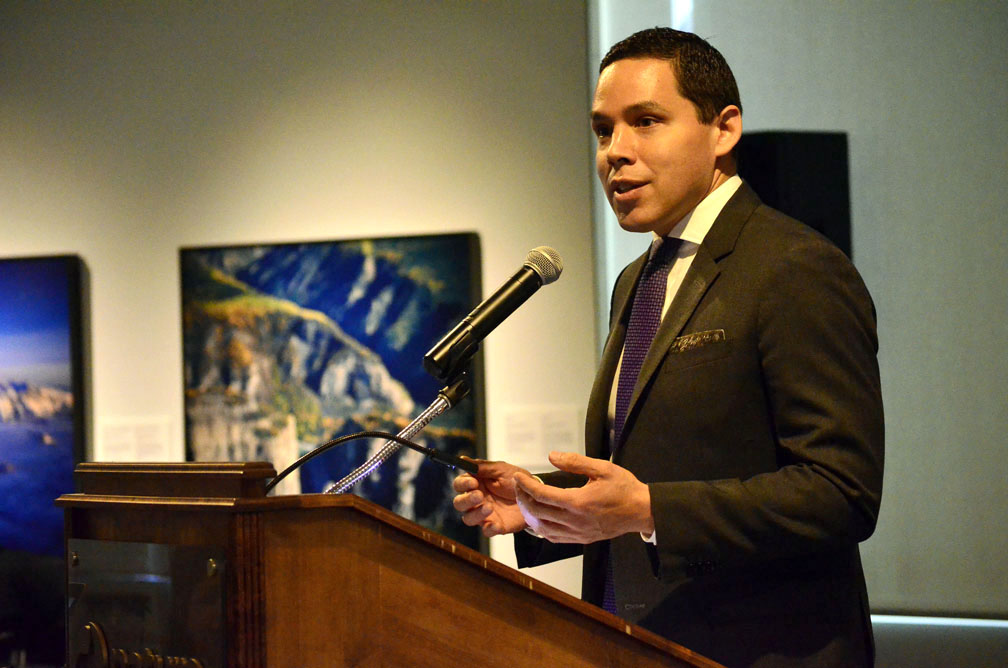 Natan Obed, the president of Inuit Tapiriit Kanatami, announces the release of the National Inuit Strategy on Research this past March 22 at the Canadian Museum of Nature in Ottawa. (PHOTO BY JIM BELL)

The premise of the strategy is that, in the past, researchers have exploited Inuit and ignored their needs.

“The relationship between Inuit and the research community is replete with examples of exploitation and racism,” the strategy document says. 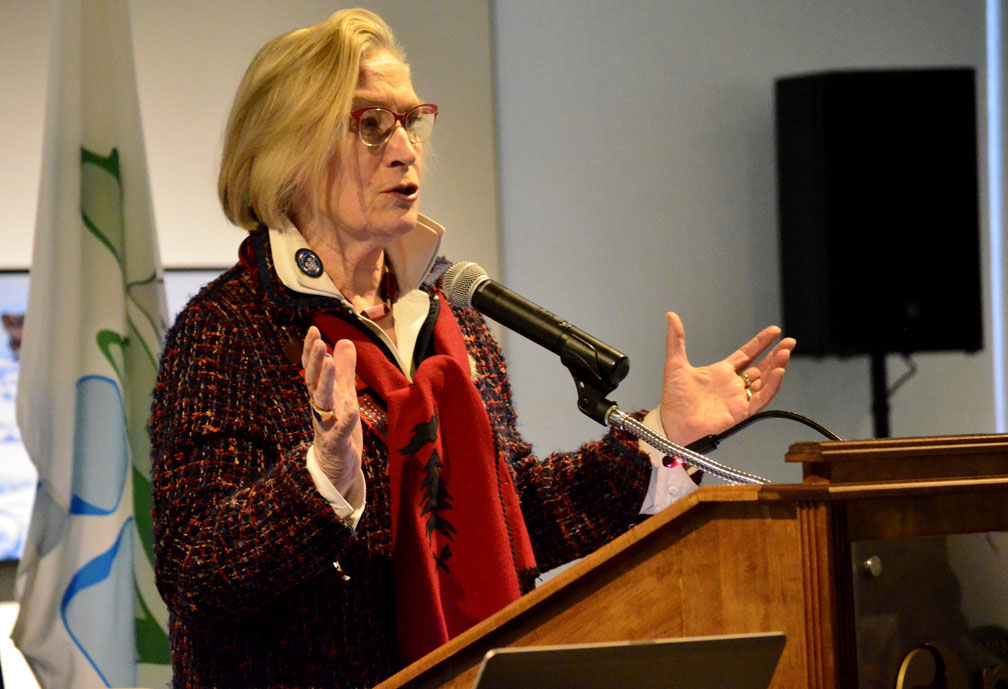 Carolyn Bennett, the minister of Crown-Indigenous relations, speaks March 22 at the launch of the National Inuit Strategy on Research. Bennett did state any specific commitments but she praised ITK for producing the strategy, and said science will play a big role in the new Arctic policy her government is working on.

The strategy, which fulfills a promise Obed made in 2016, when he released ITK’s 2016 to 2019 action plan, seeks partnerships with researchers that respect Inuit self-determination.

“Achieving Inuit self-determination in research can lead to an evolution of the outdated policies and processes that determine our relationship with research, as well as enhanced capacity for Inuit-led research,” the strategy document said.

First, not enough funding goes to Inuit health and social research, which means Inuit organizations and governments that serve Inuit don’t get enough good information to guide policies and programs that could help people.

ITK also complains most funds go to what they call “biological-physical science” research and Inuit priorities tend to get ignored.

Second, the volume of research within Inuit Nunangat is growing rapidly, but Inuit have little control over it.

Between 1996 and 2011, the volume of academic publications related to the four regions of Inuit Nunangat increased by a whopping 200 per cent.

In 1996, one Inuit Nunangat-related publication was produced for every seven Inuit.

By 2011, there was one Inuit Nunangat publication for every three Inuit.

This represents the expenditure of hundreds of millions of dollars over the past 15 to 20 years, most of it public money.

But apart from some sporadic exceptions, Inuit have little say over who gets that research money and what it gets spent on.

The result? It’s researchers themselves who benefit the most from their research, while Inuit are marginalized.

In its National Inuit Strategy on research, ITK proposes 27 “actions” and 19 “objectives.”

But they can be boiled down to five demands:

• Better ethical conduct on the part of researchers, through better means of holding them accountable for existing ethics guidelines as well as new Inuit-specific guidelines for research on humans, wildlife and the environment.

• More research funding that is directed to Inuit research priorities.

• Inuit access, ownership and control over their data and information.

• Capacity building for Inuit Nunangat research, including development of an Inuit Nunangat university, reliable broadband internet and other measures.

The ITK research strategy document is too discreet to list specific examples of research that does not benefit Inuit.

But some projects, even in the recent past, have done real damage and produced years of conflict between Inuit and researchers.

One of the best known is series of studies, sponsored by Environment Canada and conducted with little Inuit participation, that predicted in 2004 that the West Hudson Bay polar bear population would decline to about 600 animals by 2011.

Inuit hunters suffered the imposition of severe quota cuts that reduced the total allowable harvest from a high of 56 animals a year down to a low of eight.

But in 2011-12, that earlier research turned out to be wrong. A survey by different researchers, working for the Government of Nunavut, found the polar bear population in the region was stable and holding at around 1,000 animals.

Another example is the 2007-08 Inuit health survey, part of International Polar Year, which involved the collection of samples of bodily fluids, survey information and other data from 1,923 Nunavut Inuit.

Most of the results of that survey were not released until 2014, when Nunavut Tunngavik Inc.’s social development department had compiled the information into a report.

And in that report, NTI was highly critical of the way that $10-million survey was handled.

“The major concern for us is that our academic partners would use the information, and the data sets, for their own academic purposes. We didn’t ever agree to have a purely academic exercise about particular populations and their health outcomes. We did this to improve the lives of Inuit,” Obed, then the director of social development at NTI, said in 2014.

4. What does the strategy mean for researchers?

If ITK’s proposals are accepted, it could mean that more health and social research will occur within the four regions of Inuit Nunangat.

Also in the future, scientific researchers who apply for funding must show they’ve obtained consent from Inuit to do their work.

And researchers would also have to show their work is in line with priorities set by Inuit representative organizations.

That includes following ethical principles that Inuit have helped create, with real accountability and acceptance of Inuit ownership and control of data. 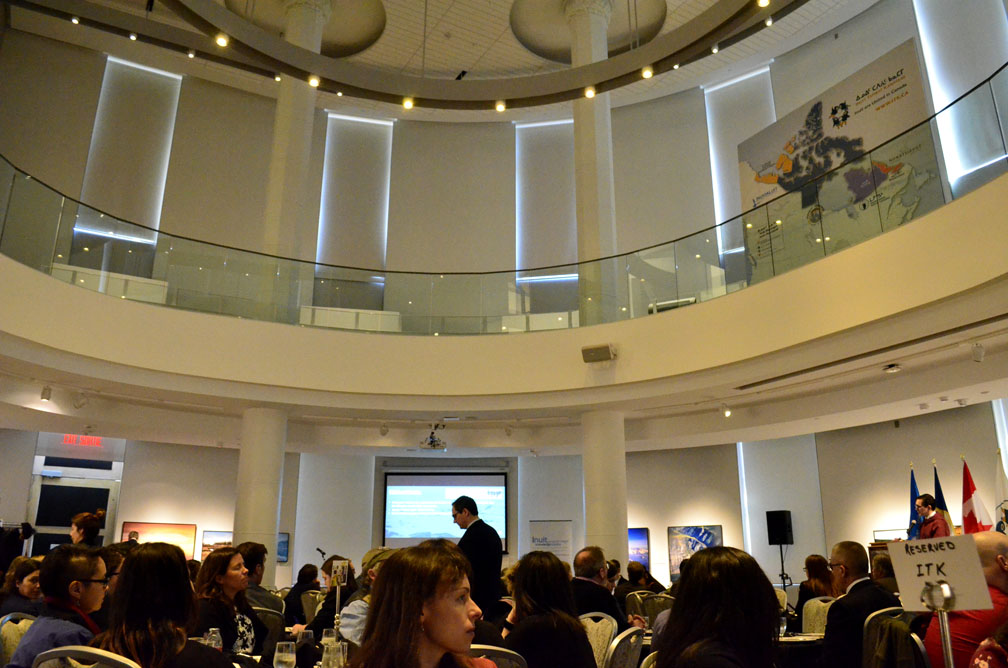 A large audience, made up of scientists, research institution executives and Inuit living in Ottawa gathered at the Canadian Museum of Nature in Ottawa last week for the launch of the National Inuit Strategy on Research. (PHOTO BY JIM BELL)

ITK hopes the federal government and research agencies will start implementing the strategy in time for mid-term actions to be evaluated by 2020.

The hope to do another evaluation, of longer term work, in 2022.

Note: The examples cited in list number 3 were added by the writer of this article. They are not explicitly described within the strategy document.

National Inuit Strategy on Research by NunatsiaqNews on Scribd