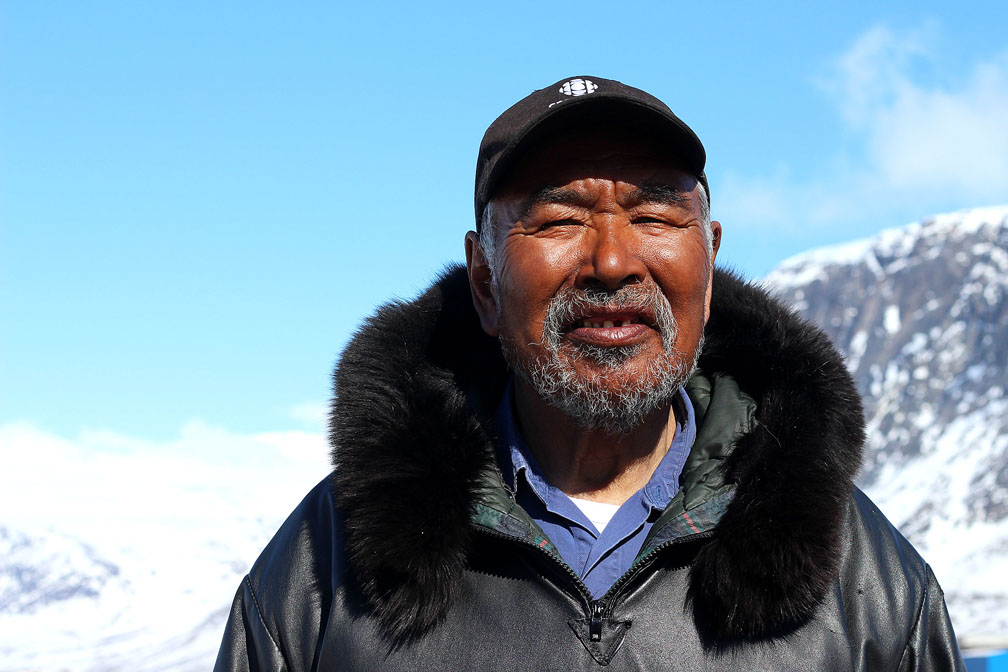 Lazarusie Ishulutaq says youth are “content” when they spend time out on the land. (PHOTO BY BETH BROWN) 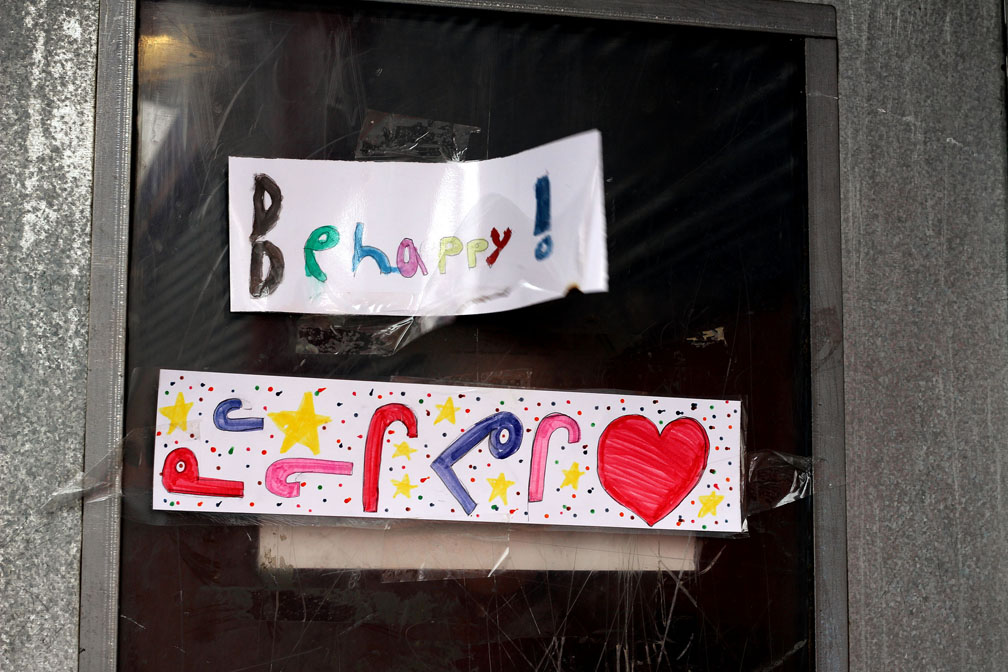 Young people from Pangnirtung’s youth council posted these messages on the door of their high school. (PHOTO BY BETH BROWN) 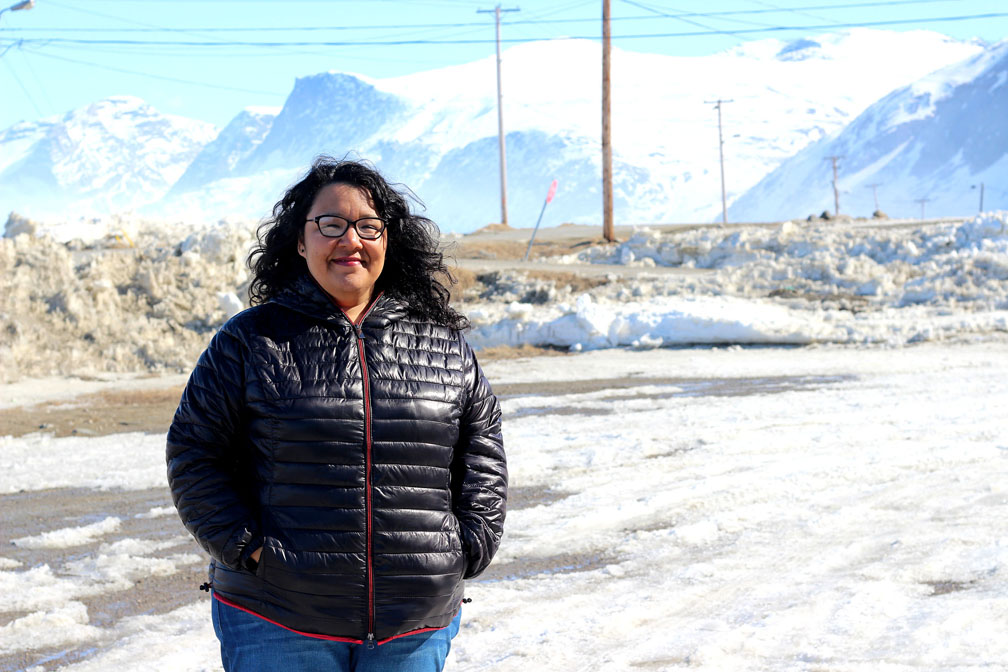 After Pangnirtung’s mental health crisis broke in national media, Mona Michael took to Facebook to spread a positive message about her home.
(PHOTO BY BETH BROWN) 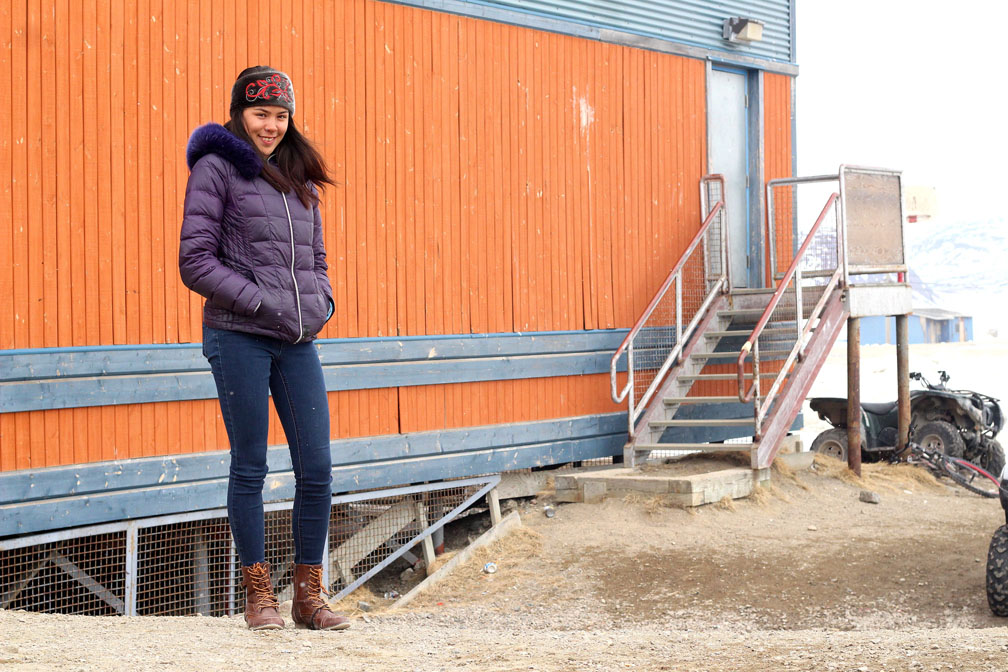 Denise Nowyuk says youth in her community have lots of ideas for helping their peers, but they need more support to make those plans happen. (PHOTO BY BETH BROWN) 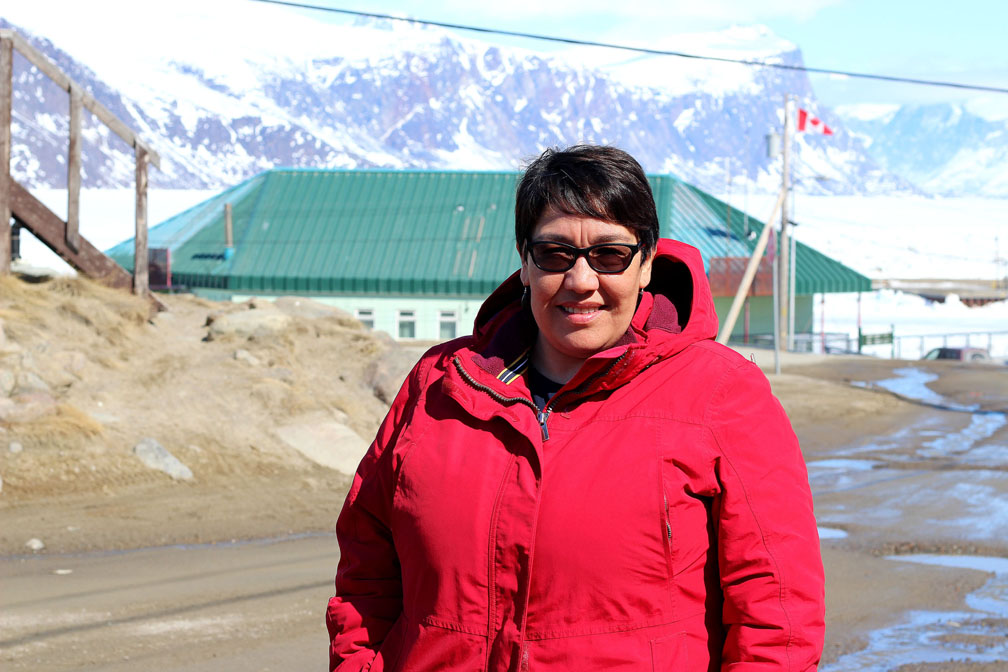 Pangnirtung MLA Margaret Nakashuk said after her constituents travel south for addictions treatment, there is no support system when they return home. (PHOTO BY BETH BROWN)

It also looks onto the community’s only bridge. One time, when Kilabuk looked out that window, she saw a girl try to jump off the bridge.

“Our young people are calling for help,” the 25-year-old hamlet councillor said last week, on May 23. “We want community members in Pang to know we are listening.”

By “we,” she means the hamlet council—the community’s elected municipal body.

The hamlet council chose Kilabuk to speak to media on their behalf.

Over the past few weeks, the small east Baffin community of about 1,600 people made national headlines when its hamlet council publicly called on the Government of Nunavut for more money and trained staff to help its people.

That call came after 12 young people tried to take their own lives within a span of two weeks, in February.

At that meeting, the RCMP called the situation in Pangnirtung “not a crisis” and GN bureaucrats spoke at length about existing services run by the departments of Health, Justice and Family Services.

There are now plans to set up a working group with representatives from the hamlet and the GN, and to kickstart a safe shelter that the hamlet asked the GN for support to build and manage.

But Kilabuk said there are a lot of barriers to accessing those services, including language, since many people in Pangnirtung don’t speak English fluently.

“We are calling for help, because we want programs and services for people who are struggling to access them,” she said. “That’s why we are trying to come up with a plan.”

A community rallies together

While councillors are calling last week’s meeting “a start,” the gathering is far from the first effort made by people in Pangnirtung.

After the suicide attempts in February, the hamlet organized its own interagency meeting where schools, non-profits, elders and local government and community leaders got together, in the hopes of curbing their youth crisis.

Around that time, the GN flew in a crisis team and an extra mental health worker. The schools brought in an anti-bullying group and asked local elders to talk with youth about mental wellness and resilience.

The hamlet started a youth council, and made sure that the community centre was open for local activities.

Community health representatives went door to door collecting expired and unneeded medication from homes. That’s because there were many calls made to a poison control centre after youth tried to overdose.

In January, a wellness group in Pangnirtung hosted two weeks of healing workshops, and consulted with community members to develop a five-year plan to get to the root of the crisis that Pangnirtung saw this winter.

Following those workshops, a healing committee called Pujualussait was revitalized.

“Our community has worked very hard,” Kilabuk said. “I think we did something that many communities try to do or want to do.… I hope we can set an example.”

Pangnirtung MLA Margaret Nakashuk found herself in tears when she spoke to the GN’s assistant deputy minister of Justice and Nunavut’s chief of police last week.

“The hike that we’ve seen in terms of suicide attempts by youth, it’s scary,” she told Nunatsiaq News.

“How can we ensure that our youth are safe in five years’ time? We need to talk about what we need to do in the long term.”

Nakashuk wants addictions support prioritized, but Pangnirtung’s requests for outside help have not been effective, she said.

One Pangnirtung resident did venture south for addictions treatment, but because that person had no support when they returned home, they fell back in to their addiction, Nakashuk said.

No safe place, no voice for youth

“Just because we are a prohibited community, it doesn’t mean we don’t need AA [Alcoholics Anonymous],” said Eric Lawlor.

A hamlet staffer, Lawlor leads the youth council and is part of Inuit Ilagiit, a wellness society that runs a soup kitchen in Pangnirtung.

Between 2007 and 2015, Lawlor said Pangnirtung was “the pride of Nunavut” when it came to youth support.

Then, the community had a youth centre for young people ages 18 to 35, run six days a week by a full-time manager and a handful of staff.

“Over the years it grew and grew,” he said. “It gave them that safe place to gather.”

But the centre closed when federal funding used to run the youth centre ran out, and the community had no plan to sustain what they had built.

“With that void came more drugs and alcohol abuse,” he said.

Mike Jeffrey, chief superintendent of the Nunavut RCMP, said crime in the community has increased by 16 per cent over the last five years. RCMP are asking for an additional officer in Pangnirtung.

Still, last year there were no deaths.

“I thought it was going good last year,” Lawlor said. “I didn’t realize we were in such a huge crisis until we heard of the 12 attempts.”

In April, there was one completed suicide in Pangnirtung.

“There’s nothing to do here,” 19-year-old Denise Nowyuk said of her community, especially now that the arena is closed for the season. The pool is also broken.

That doesn’t seem to stop her from keeping busy.

In Grade 10, Nowyuk stopped going to school, but seeing her friends graduate caused her to change her mind.

The Grade 12 youth is now president of the student council, the youth rep for the community’s district education authority, and she’s a member of the Pangnirtung youth council.

Next week she’ll represent Nunavut at a Skills Canada competition in Edmonton.

She also pumps gas as a part-time job, and spends her spare time visiting her grandparents, hanging out with her older brother and going fishing.

“If you don’t ask for help, you’re not going to get anywhere,” Nowyuk said. But often, her peers don’t know how to ask, she said.

The youth council met on May 23, to plan ways to keep young people busy in the summer—they have ideas like an art club, a small coffee shop, and Inuktitut dances.

The teens have lots of good ideas to make things better, but those ideas don’t always work out, she said.

It’s easier when you know who you are

When news about the struggle in Pangnirtung broke into national media, Mona Michael felt she needed to tell people about the good there is in her community.

She did that by posting on Facebook, and her post was met with gratitude from the community, and from past visitors.

“It’s my home. I don’t want people to only find out about the struggles we go through, I want them to know what Pang offers as well, what Pang people do, who we are,” she said.

“Even during hard times, like what went on the news, we as a community pulled together and started working together to be resilient.”

Besides language, she sees Inuit culture as the best way to give youth a sense of belonging.

“You feel better when you know where you come from, who you are, and who our ancestors are,” she said.

Youth in Pangnirtung just finished their annual “spring camp,” where they spend time on the land, hunting and fishing and learning Inuit culture instead of going to regular class.

When Lazarusie Ishulutaq was young, children learned by watching their parents. Now, young people ask a lot of questions when he takes them hunting and fishing, he said.

“You pick up things when you are growing up. What you pick up you never forget,” the respected elder said through an interpreter.

Ishulutaq teaches youth how to care for hunting equipment, where to look for different kinds of wildlife, and what the place names are for seasonal camps.

Weather allowing, he had plans to take a few teenagers seal hunting the next day.

“They want to follow the hunting party and pick up what is needed in order to provide country food or have the knowledge of the land or the waters,” Ishulutaq said of the young people he tutors. 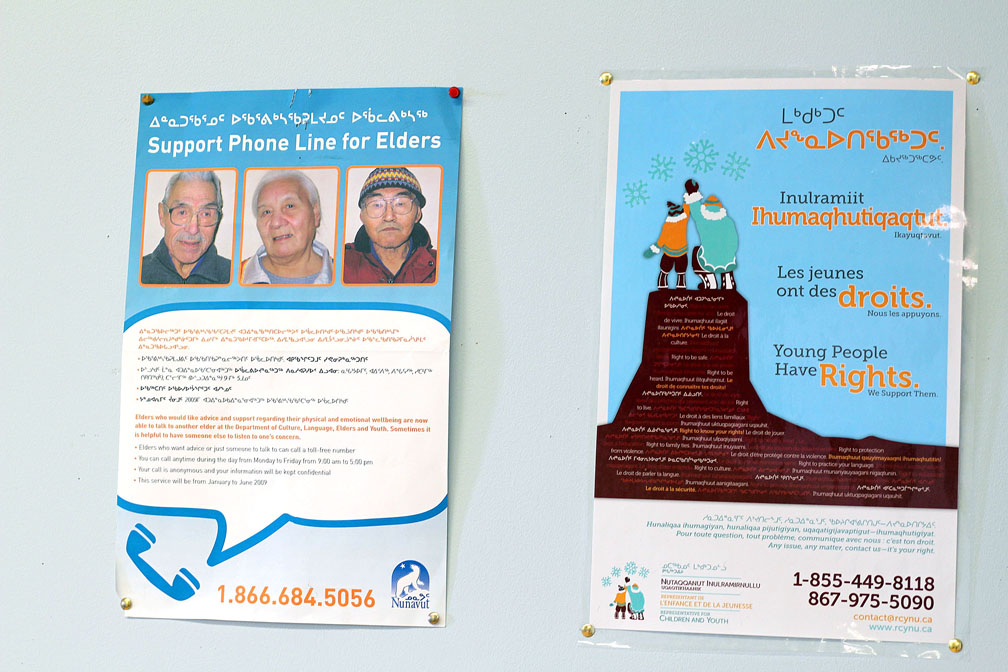 Posters like these can be found on bulletin boards throughout Pangnirtung. (PHOTO BY BETH BROWN)