They call him Mister: Igloolik singer brings Inuit musicians together

“He has a very emotive kind of voice, it can carry a lot of emotional weight.” 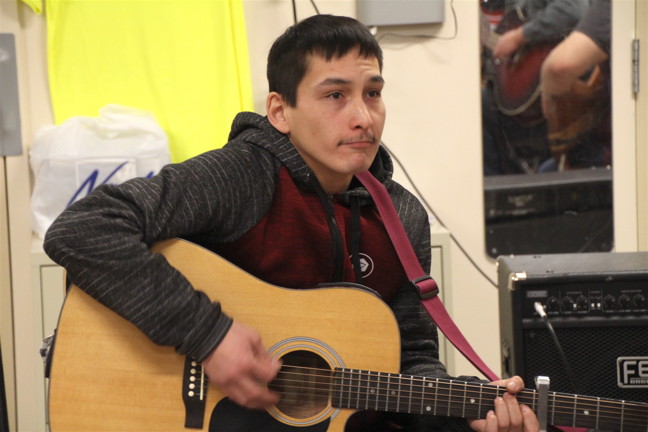 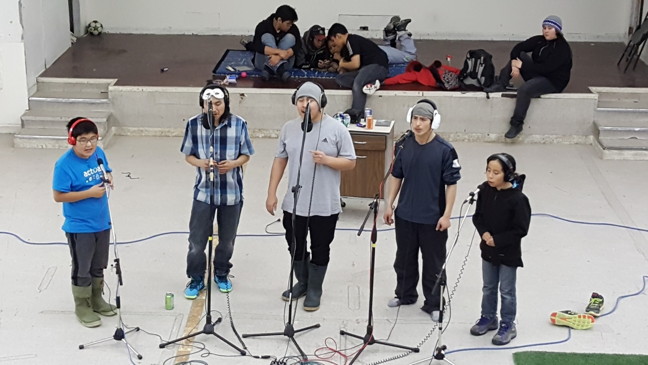 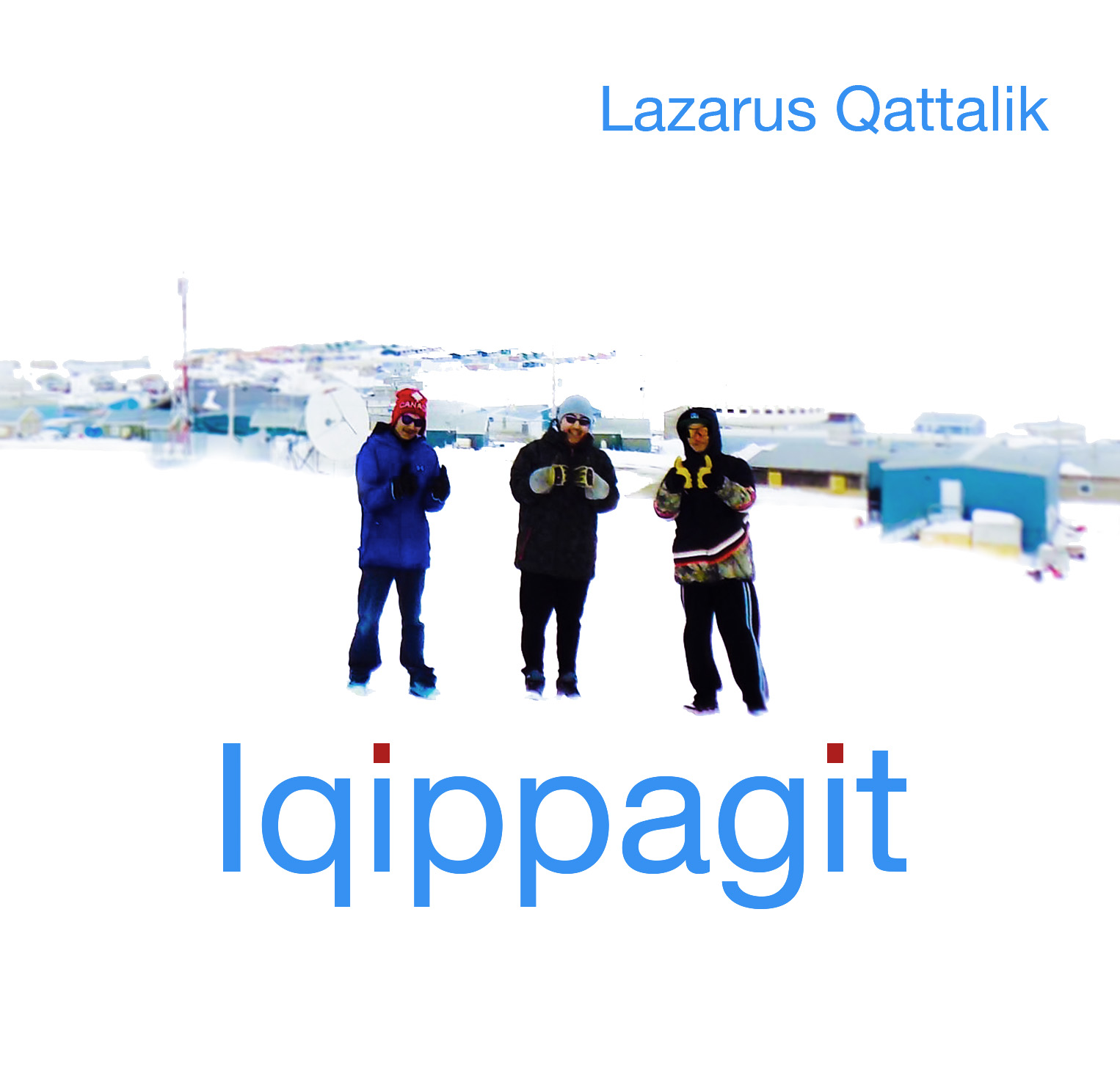 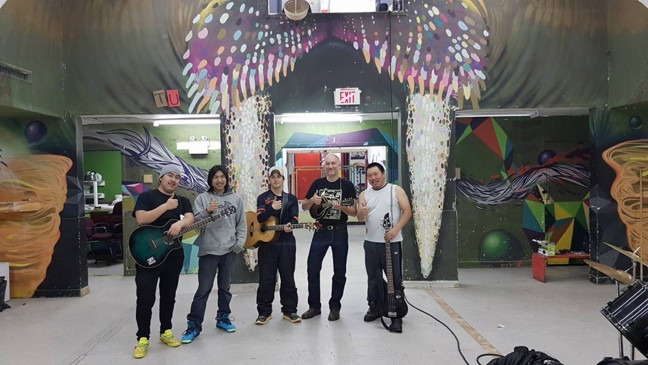 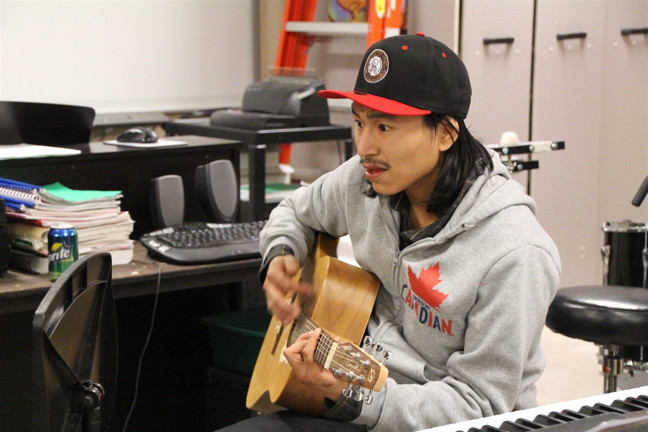 Ten years after writing his first song, Igloolik artist Lazarus Qattalik is proud to be promoting his new album, Iqippagit.

“It means a lot to release an album. It feels like an accomplishment,” said the 24-year-old singer, guitar player and drummer who goes by the stage name “Mister.”

In the wake of the 10-track album’s December launch, Qattalik and his band mate Allan Kangok were in Iqaluit last week to open for an Alianait concert, and to join artists from Iqaluit’s Inuuqatigiit band to showcase Inuktitut music covers at a tribute concert.

“When I try to make a song it’s hard, but when it comes, it’s very easy,” Qattalik told Nunatsiaq News during a practice for that concert, after being asked what spurs his song-writing.

“It just comes out of nowhere,” he said. “They’re from the heart.”

And what’s the response he’s getting from fans?

“They like it a lot,” Qattalik said. “They realize how much good they have.”

Iqippagit is dedicated to the memory of Artcirq performer and Igloolik musician Joey Ammaq, who died in 2014.

Coleman says it’s more economical for him to go to artists’ communities to record. The setup makes sure musicians don’t have to be away from their young families, and that they are recording in comfortable surroundings.

“[The band], they’re quiet, Mister in particular, but when you ask them to sing they just belt it right out,” Coleman said. “He’s an extremely talented young guy. He has a very emotive kind of voice. It can carry a lot of emotional weight.”

At the time, the old community hall in Igloolik was mostly being used for storage. Luckily the many boxes stacked against the hall’s interior walls made for better acoustics, Coleman said.

While Nuvu produced Iqippagit, it was the Inuit performance collective Artcirq that headed up the project.

Mister’s album was funded in part through a Government of Nunavut grant, as well as by the Artcirq circus group and the fundraising efforts of Qattalik and his band mates.

Artcirq’s Guillaume Saladin said if you cut costs to a bare minimum, making an album in a northern community can be done for between $10,000 and $15,000. That’s without paying the artists.

“Once it’s sold, they have royalties,” Saladin said. “Now that Lazarus has a CD, it can start to pay off.”

The album itself was made in the spirit of the community, Saladin said. “It’s locally made, the way people play music in Igloolik.” Regardless of sound quality, “the soul is there,” he said.

Track seven of Iqippagit features band members from Igloolik’s young rock band Nutarait, or in English, the youngest ones. The song, Ajurnaruniisuu, roughly translates to “we’re going to succeed” or “we’re going to make it,” Saladin said.

The album release was northern-style too, Saladin said. Once the first 500 CDs arrived in Igoolik in December, Qattalik quickly put the word out on Facebook.

“Skidoos started to drive to his place to buy, buy, buy,” Saladin said. “People were waiting for a long time.”

You can watch a video of Qattalik recording his song Irnikuluga (which is about his three-year-old son Rylund) with Coleman during a visit to Iqaluit for a songwriters’ circle hosted by Alianait and Qaggiavuut in March.

“I hope this is not the last of Mister,” Saladin said. “Every time he plays he makes people feel good. We need more of him.”

“It’s busy, gotta be here and there, but it’s all good, I love it,” Kangok said.

The two have grown up playing music together. “He’s my band mate. More like, my best friend,” Qattalik said.

Until recently Mister and his band have stuck pretty close to Igloolik for shows, but they are set to perform in Hall Beach this week.

As for the weekend tribute concert, the duo were thrilled to work with Inuuqatigiit band members Charlie Panipak, Daniel Kolola and Mason Angnakak on songs by Nunavut music icons like Uvagut band, Charlie Adams, and Susa and Etulu Aningmiuq.

“They’re favourites, it’s what’s on the radio. It’s been around for a long time and they’re catchy,” said Panipak, whose mother is in the band Uvagut. “It’s nice to have two different bands mix stuff together.”

If you’re looking for a copy of Mister’s album Iqippagit, you can contact Qattalik on Facebook. Iqippagit will also be available on iTunes soon.