Thieves snatch Ollie the Muskox, the mascot in time for spring festival 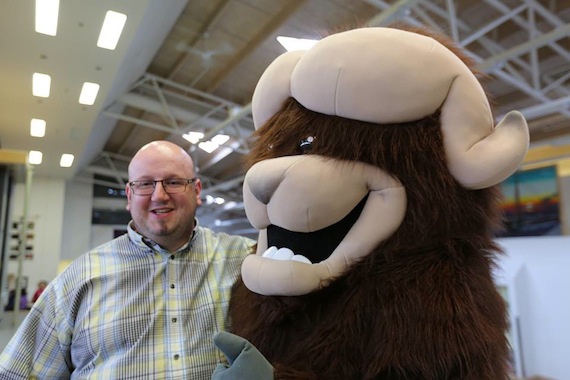 The Hamlet of Cambridge Bay’s recreation co-ordinator, Fred Muise, seen here with Ollie the Muskox, is happy May 17 to see the return of his buddy. Muise received an anonymous email May 16 saying that Ollie would reappear May 20 for the spring festival’s parade. Muise and Mayor Jeannie Ehaloak issued pleas on Facebook for Ollie’s safe return, while people in the western Nunavut community were upset over cancellations of Ollie’s appearance at other events in the festival, which got underway May 13. (PHOTO BY RED SUN PRODUCTIONS) 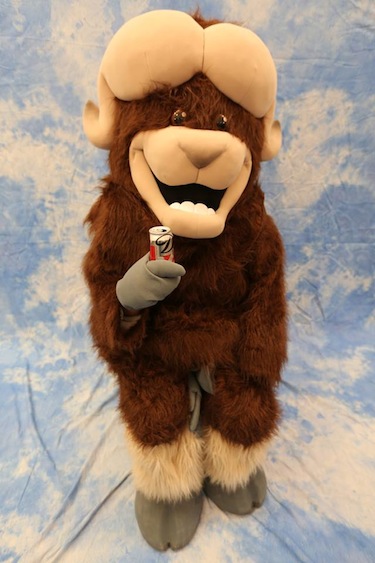 Here’s a photo of Ollie at an earlier festival. (PHOTO BY RED SUN PRODUCTIONS)

Ollie the muskox is back after a one-day disappearance: Ollie, the mascot for Cambridge Bay’s spring festival, the Omingmak Frolics, was returned safely to the community’s RCMP detachment during the afternoon of May 17.

“A huge thank you goes out to Sgt. Jean-Guy Lalonde for taking the lead and a huge thanks goes out to his team for their assistance,” said Fred Muise, the recreation co-ordinator of Cambridge Bay, in a message to the western Nunavut community.

When Ollie went missing May 16 many residents of Cambridge Bay who had planned to party with the muskox mascot during their 10-day spring festival were disappointed — and angry.

Muise had received an email that only said “we’ve taken him for the parade and will return it on Friday.”

The thieves who stole the mascot emailed Muise saying that they took Ollie and would keep him for the festival’s May 20 parade.

“However, we need him for our photos with Ollie,” Muise said. “I responded to the email, although I don’t know whose email it is stating I need it back ASAP.”

Muise made a plea for Ollie’s return before scheduled sponsored event with Ollie during the evening of May 16: “Thank you and please help me find Ollie.”

The call for Ollie’s return was picked up early May 17 by Cambridge Bay Mayor Jeannie Ehaloak who said: “Please bring him back for the kids”.

But the disappearance of the jovial muskox, who frequently appears in photos at the spring festival, had already led to disappointment.

The May 16 event ended up being cancelled.

“I told my kidlets we would meet Ollie and have our pictures taken this morning. They were pretty heartbroken it was cancelled tonight. It was probably meant as a joke, or to be the centre piece for someone’s float… But it is not your/your org’s costume for the taking. It was a community event for a community icon,” a woman wrote on Cambridge Bay’s Facebook page.

The photo session planned for May 16 will now take place May 18, Muise said.

There was no news about whether any charges will be laid in connection with theft of Ollie, but sources say that police planned to do an investigation if Ollie had not been returned by 1 p.m. May 17.