Thule culture bonds Greenland to Nunavut, past and present 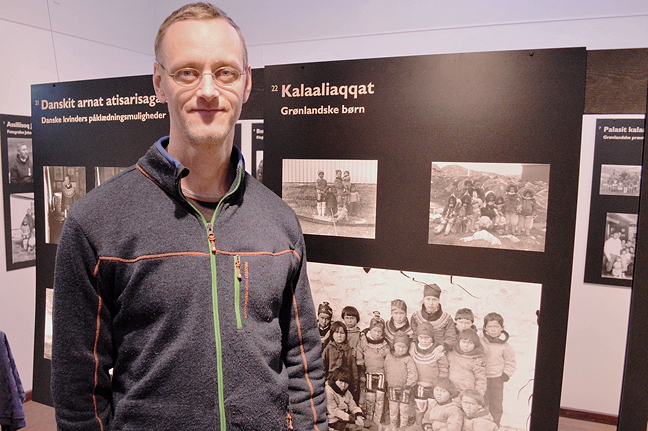 Bo Albrechtsen, deputy director of the Greenland National Museum, says he would like to see more collaboration between museums in Greenland and Canada. (PHOTOS BY STEVE DUCHARME) 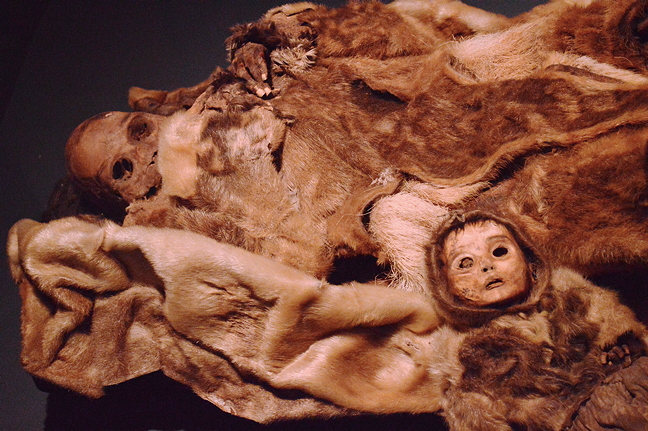 A mummified infant and mother discovered with six other individuals in a cave in 1972 near Disko Bay, on the west coast of Greenland. Experts believe the bodies were placed in their tomb around 1475 CE.

NUUK, GREENLAND — Along the shoreline of Nuuk’s old harbour stands a building of particular significance among Greenlandic Inuit.

It’s not so much the building itself: an old converted warehouse hidden among the many A-frame houses in the area that gives Nuuk’s oldest neighborhood a distinctive eighteenth century look.

But don’t let the building’s small stature fool you.

Inside is the Greenland National Museum and its collection of priceless artifacts and exhibits — there for celebration, education and to ensure the early Inuit way of life is never forgotten.

“By the means of a centre like this you can define yourself in Greenland,” said Bo Albrechtsen, deputy director of the museum.

Nearly half of the museum’s limited floor space is dedicated to its permanent Thule exhibit: the forbearers of modern Inuit in Greenland.

And that’s where Canada comes in — because you won’t get the full story of Greenland without understanding the relationship its people shared with their Canadian “cousins.”

Museum staff are quick to point that out.

“Its really good for Greenlandic and Canadian Inuit to learn they can talk to each other,” Albrechtsen said, on the need for the two countries to share their knowledge.

For a culture spread across as vast an area as the Arctic, it can be difficult for historians to pin down anything but the broadest assumptions about Inuit across the North.

And unlike other ancient civilizations, there are no ruined aqueducts or amphitheaters dotting the tundra to provide that tangible cultural link.

Instead, you have to dig a little deeper.

It’s in the community, the people and their lifestyle, where those cultural bridges across Baffin bay are strongest.

Take for example one of the museum’s centerpiece exhibits: an 11-metre long umiaq recovered from the most northeastern tip of Greenland in 1949.

Archeologists dated the boat, made entirely of driftwood that likely crossed the Arctic Sea from Siberia, to the 15th century.

The craft symbolizes a golden era of seafaring by Greenland Inuit, Albrechtsen explained.

Six women traditionally paddled the vessel, which was mostly used to haul goods, with a man steering the boat from the stern, he said.

And Inuit in kayaks paddled alongside the umiaq to protect it during voyage.

But at some point, Greenlandic Inuit stopped building kayaks, and then forgot how to make them. It wasn’t until centuries later that the skill was reintroduced from Canada.

“In the Thule region before 1864, there wasn’t the ability to go out kayak hunting, to build kayaks. In some way, it was forgotten,” Albrechtsen explained.

“But then these people come from Canada, and they brought the tradition with them and reintroduced them in the Thule area among the people.”

Coincidently, 1864 was the last year Canadian Inuit are known to have migrated across the bay to Greenland, Albrechtsen added.

The museum is home to hundreds of tools gathered in the 19th century: bone goggles, harpoons, spears and knives which wouldn’t look out of place in the hands of Baffin Inuit from the same period.

Those tools, along with shared myths and stories, are the backbone to Canada and Greenland’s combined Thule heritage.

“Among the myths and legends, there are many myths that you can hear in Greenland and they are also recorded in Canada, and even Alaska also,” Albrechtsen said.

One of those shared legends tells of the transition to the afterlife.

In it, Inuit crawl under a mat, or carpet, to travel into the land of the dead.

According to that lore, it took a year for someone to travel under the mat to the next world. And the actions of the living determined the hardship of the journey over that time.

“If you break a taboo, the carpet will get heavier and the people on their way will have difficulty crawling out on the other side,” Albrechtsen said.

The legend in part explains the pristine quality of the clothing left on eight Inuit mummies discovered near Disko Bay in 1972 to worldwide acclaim.

The mummies were discovered in a cave, partially sealed off by a large stone, just north of Disko Bay on the west coast of Greenland.

Good air circulation and constant subzero temperatures effectively freeze-dried the bodies, which were placed in their tomb at about 1475.

The bodies were clothed in well-made Inuit attire, with each individual separated by a layer of caribou hides.

The two infants, one so perfectly preserved the face still carries emotion, were buried with their mothers.

At the time of their burial, Thule Inuit had been in Greenland for less than 300 years, having arrived en masse from the land that would become Nunavut.

Communication, says Albrechtsen, is the key for Inuit to understand this heritage.

“It is a pity that we don’t really have good collaboration with the Canada side among the Inuit museums. I think it’s a lack,” he said.

Those two museums would be the Prince of Wales Heritage Centre in Yellowknife and the Winnipeg Art Gallery.

Some 8,000 pieces of Inuit art stored at Northwest Territories’ Prince of Wales Heritage Centre were sent south to the WAG in February for cataloguing and display.

Many of the artifacts sent south have never been properly catalogued, or even shown in public.

And a proposal to build a heritage centre within Nunavut to store those artifacts has been bandied about, with no firm execution plan.

The best thing, said Albrechtsen, would be for other museums to take the role of the Greenland National Museum in other regions.

“The most valuable thing [museums] could do would be to give the public insight into who are these Inuit people,” he said.

“And for the Inuit themselves, ‘our history’.”