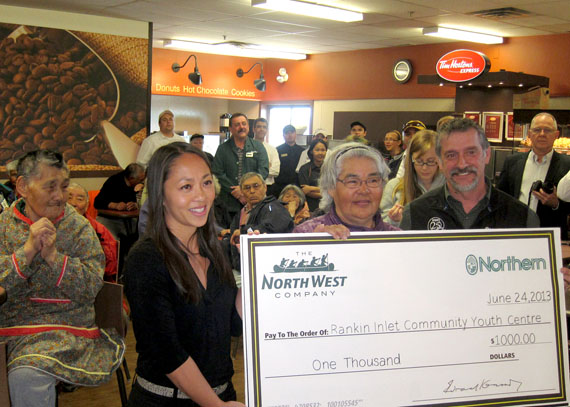 When Rankin Inlet celebrated the opening of two Tim Hortons coffee and doughnut kiosks with fanfare June 24, one prominent business-owner in the community wondered whether there was truly reason for the community to celebrate.

“I’m just disappointed that a big corporation such as Tim Hortons doesn’t think about whether a community of a certain size is already being met by a lonely entrepreneur, and what they could give to the community that could make our people healthier, not unhealthier,” said Tara Tootoo-Fotheringham.

The married mother of three owns and operates Sugar Rush Café, the only stand-alone restaurant in the community, as well as the Arctic Buying Company, which ships groceries from Winnipeg to customers in Rankin Inlet.

Offering healthy food is part of the shipping company’s mission, she said.

The lower cost and ready access to nutrient-poor big-name snacks, sweets and drinks is all too well known to the North.

“We complained about it years ago, that it was cheaper for our kids to have a chocolate bar, a bag of chips and a can of pop than it was to buy a sandwich, an apple, and a juice for lunch,” said Tootoo.

A second kiosk also opened for business at the community’s Area 6 convenience store.

“It all comes down to the North West Company making that decision, you know, what they want their customers to have access to,” said Tootoo.

The Tim Hortons Express kiosks offer doughnuts, muffins and other pastries mostly high in sugar, as well as Tim’s coffee, tea and hot chocolate – all on a 15-foot-long self-serve counter.

The Northern store’s location includes several tables and chairs for more of a coffee shop-type atmosphere.

Although it was too early to tell whether her restaurant, which seats 45, faces that much competition from Tim’s, Tootoo said two new coffee-doughnut outlets in the community of 2,800 is sure to have some effect on local businesses.

“When and where do big chains realize that there’s a company that’s already servicing?” Tootoo asked.

She questioned the tactics of the North West Co. and the national franchise, given that representatives paid her restaurant a visit last year on what appeared to be a fact-finding mission.

“They sat in my restaurant and they were asking my manager questions about what kind of volume I get per day from customers and everything like that,” said Tootoo.

“Now they’re competition, right? They came in with Northern store people and sat down, and basically critiqued my restaurant, and then decided to go ahead with it,” she laughed.

Unlike other restaurants in Rankin Inlet, which are connected to hotels or other second businesses housed in the same facilities, Tootoo’s Sugar Rush is a stand-alone establishment.

This is a rarity in the North, where combining businesses diminishes costs and risks caused by weather and long supply lines.

Tootoo recalled that her former bed and breakfast business was a “win-win” situation, much like joint hotel-restaurant businesses.

Stand-alone restaurants must rely on customers who keep coming back.

“If your patrons go elsewhere, then you won’t be there for very long,” she said.

“I think competition is important, but it’s just disappointing that a large chain such as the North West Co. could choose whichever thing they want to put in, at any of their locations, and they choose something that is just not even beneficial for most aboriginal people,” she said.

“I’d like to start seeing healthier things come to our communities,” she added. “We have high rates of obesity, and diabetes is creeping up.”

Although its name might suggest otherwise, Tootoo’s Sugar Rush Café offers a broad menu, ranging from burgers to sushi.

“I tried to pull away from offering just high-calorie high-sugared items. We went ahead and introduced full meals and healthy options,” said Tootoo.

All the same, she agreed that the appeal of Tim Hortons doughnuts and coffee in Rankin Inlet can’t be denied.

Residents were known to import boxes of doughnuts on flights back from Winnipeg, Yellowknife and Iqaluit, and cans of Tim Hortons coffee line store shelves.

Opening day at the Northern store’s outlet hosted “hundreds of customers” in the first three to four hours of business, according to store manager Paul Delaney.

“There was a lot of anticipation for it,” he said. The initial rush settled by mid-week.