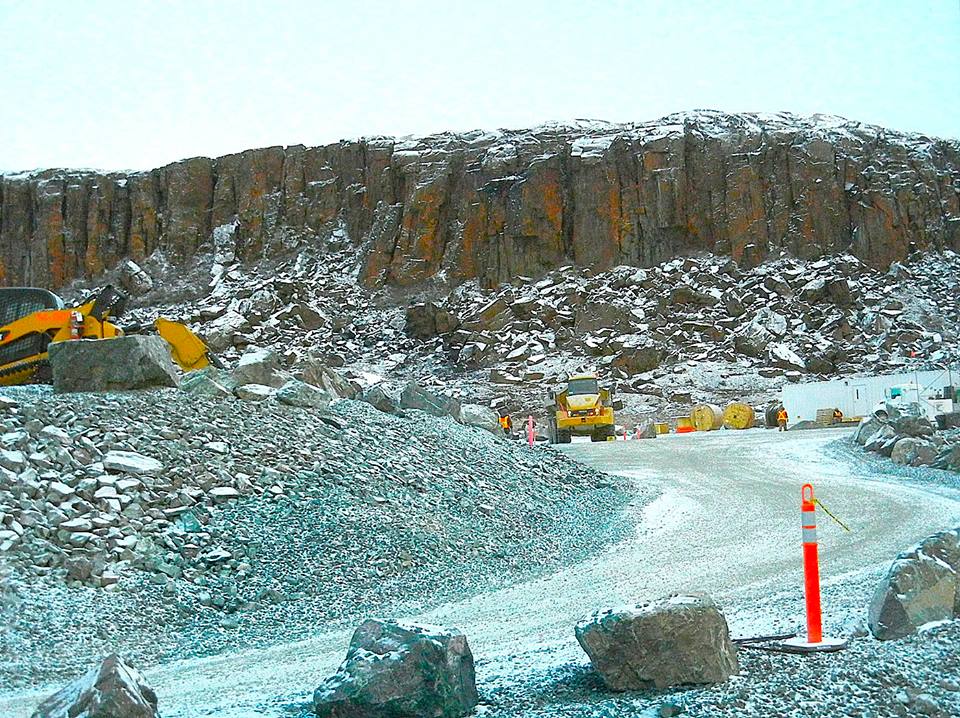 Activity at the Doris North gold mine project site in 2013, shortly before Newmont Mining Corp. decided to put the gold mine mine into care and maintenance. Now, TMAC Resources Ltd. is moving closer to putting the mine into production, and for a longer period. (PHOTO BY JANE GEORGE) A view into the underground mine at Doris North in 2013, where its current owner, TMAC Resources Inc., wants to enlarge the mine and its operations. (PHOTO BY JANE GEORGE)

CAMBRIDGE BAY — In early 2017, Nunavut may welcome its second operating gold mine.

But TMAC Resources Inc. still needs to learn if Nunavut regulators will allow it to operate an expanded Doris North gold project at Hope Bay over six years instead of two.

The company expects to receive a decision from the Nunavut Impact Review Board and the Nunavut Water Board on the project certificate amendment by the end of May.

“We don’t presume they will approve the amendment,” said Alex Buchan, TMAC’s director of community relations, after Nunavut Impact Review Board hearings held April 12 to April 14 in Cambridge Bay.

But, judging from the comments made during the hearings, there was little serious criticism of TMAC’s plans, with the Kitikmeot Inuit Association supporting the larger and longer-term gold mine project, located roughly 90 kilometres south of the western Nunavut town of Cambridge Bay on Inuit-owned land.

The mine will be worth millions to the KIA, if TMAC’s bigger plans progress: The KIA will receive one per cent of the value of all gold produced at Hope Bay, estimated at $960 million over 10 years, through what’s called a “net smelter royalty” — or about $69.5 million over six years, according to information presented at the hearings.

The KIA will also receive $1 million a year to offset land management, environment permitting and the implementation of the Inuit Impact and Benefits Agreement.

If regulators approve the project certificate amendments, the Doris North mine will also see $61.8 million in jobs and contacts over six years.

As for the onsite mine jobs, 344 by 2018, TMAC will try to fill these locally, Buchan said: Priority will be given to Kitikmeot Inuit, then to Inuit from other regions, then to all other residents of the Kitkmeot region.

“There are lots of long-term non-Inuit who have roots in this region,” Buchan said. “So it’s good for Inuit and the region to hire them.”

By the end of this month, there will be 180 people on site at the Doris North camp.

In 2016, TMAC plans to install and commission its mill and expand the power plant there. The company also wants to stockpile ore and 55,600 ounces of gold and develop the underground mine network.

But to operate over a six-year period, TMAC needs that amended project certificate for Doris North, which was originally issued to Miramar Mining Corp. in 2006.

Newmont Mining Corp. acquired the project certificate when the company bought Miramar in 2007, expecting to start mining in 2012, but then backed out and put the property into care and maintenance. TMAC took over the project in 2013.

Overall, recent hearings on TMAC’s request for the NIRB amendment were positive:

• the KIA said any remaining technical issues “can be successfully resolved through continued cooperation” between KIA and TMAC;

• Indigenous and Northern Affairs Canada said it has “identified mechanisms beyond the NIRB process through which our remaining concerns can be addressed;”

• the Government of Nunavut, which wanted the project-related shipping season to end Oct. 15, noted TMAC has already agreed to limit shipping to the open water season; and,

• Fisheries and Oceans Canada said it would continue “to ensure appropriate mitigation and monitoring programs are implemented.”

Buchan said the Doris North project’s much smaller footprint is a “huge advantage in the regulatory process,” when compared to other Nunavut mine projects like Baffinland’s Mary River iron mine or Agnico Eagle’s Meadowbank gold mine, which include open-pit mining.

During the technical review, TMAC only had to respond to 65 questions — a much smaller number than faced by Areva Canada’s proposed Kiggavik uranium mine, which the NIRB determined last year “should not proceed at this time.”

TMAC is already looking ahead to expanding its future operations in Hope Bay at the Madrid and Boston deposits on the 80-km Hope Bay deposit.

These will be subject to a new environmental assessment, with a public consultation on these plans to take place May 3 in Cambridge Bay.