The next thing to fix is education, witnesses say 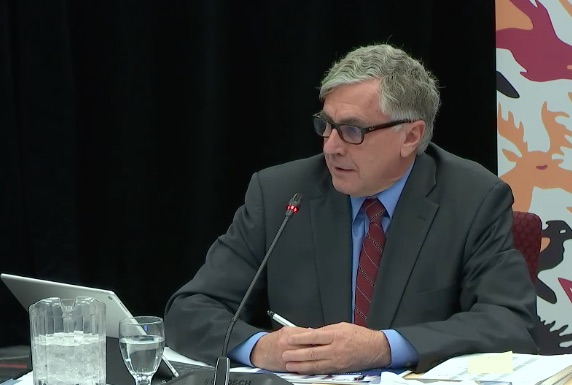 More housing in Nunavik is by far the biggest need in the region, says Camil Picard, acting president of Quebec’s human rights and youth rights commission. He spoke on March 12 to the commission looking at the relationship between Quebec’s Indigenous groups and the province’s public services. (SCREEN SHOT)

Build more houses and Nunavik will have less need for youth protection.

The commission, is looking at Quebec’s 15-year track-record in providing health, social services, correctional services, justice, youth protection and policing to Indigenous Quebecers, will produce recommendations on how improve services in Nunavik and other Indigenous communities this November.

Yesterday’s session on youth protection services and Indigenous peoples at the Palais des Congrès in Montreal—the first day of two weeks mainly devoted to health and social services—pointed to several ways on how move ahead in Nunavik.

Chief among these is to build more housing in Nunavik, where there is a reported deficit of about 800 housing units.

“For me, it’s obvious,” agreed former Quebec Superior Court Justice Jacques Viens, who is presiding over the commission, which was created last year in response to allegations of police brutality against First Nations women in Quebec.

The next thing to fix is education, Picard said during a day-long discussion at the hearing that focused mainly on Nunavik. He added that “through education, that is how we will succeed,” praising the new generation of educated leaders in Nunavik.

Yet another issue must be dealt with: addictions, which is linked to work and school absenteeism, and made worse by overcrowded housing.

“It’s tragic,” said Louise Sirois, an investigator with the human rights and youth rights commission, in her testimony, noting that in Nunavik, drug and alcohol abuse also makes it harder for Inuit families to foster children or even pass on traditions to their own children.

As an example of the plight many face, the commission heard about a Nunavik infant who was given up in a traditional adoption after his birth by his mother, who had substance abuse issues, to the mother’s friend.

Within a month, the baby, who had health issues, was given up to youth protection. And, by the age of two months, he ended up being in 11 foster homes before he was handed like “a parcel” to a foster family in the South for years.

That foster family received little support. They wanted to adopt him but couldn’t, because the biological mother was trying to rescind the traditional adoption. That was finally straightened out in ruling by a Quebec judge, which paved the way for the child’s adoption by his foster family.

There is still a long list of children under five in Nunavik who need services, Sirois said. When profit-sharing cheques from the Raglan mine are handed out in Nunavik, some youth protection workers have ended up looking after as many as seven babies, all in need of urgent care, she said.

The commission asked that the practice of handing out profit-sharing cheques to families be changed, but that hasn’t happened, she added.

Some possible recommendations for action, raised during Monday’s session, were more administrative in nature: such as gaining more help from Quebec’s Education Ministry to make it easier for Inuit youth who are under youth protection care in Montreal to attend English schools in the city.

And, for social services, there’s a need to increase the percentage of Indigenous staff within youth protection.

Picard said he has seen slow but encouraging progress in Nunavik since the creation of partnership committees that followed a damning 2010 report on youth protection in Nunavik.

Inuit are not against the youth protection principles which are based on the rights of children, but there are problems with the processes, and often these are not well understood, he said.

So, there are probably “other methods we need to think about,” which put communities in charge of children, he suggested.

Picard pointed to the recent change in policy to allow Nunavik parents to go with their children on the Quebec ambulance jet as an example of possible change.

Makivik Corp. appeared before the Viens commission last June in Val d’Or, and called for “an Inuit-specific approach” to services delivered in Nunavik.

Since then, the Nunavik Regional Board of Health and Social Services and Saturviit Inuit Women’s Association have also travelled to Val d’Or to participate.

Tuesday’s session in Montreal was scheduled to take place behind closed doors, but you can follow the open proceedings online on the commission’s website or check the schedule of witnesses.