Dogs were tied up in town when incident occurred 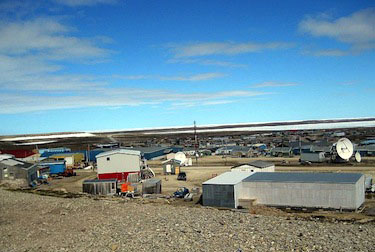 A young boy was bitten June 17 in Igloolik when he wandered too close to two sled dogs chained near a residence in the town. (FILE PHOTO)

An 18-month-old boy from Igloolik is recovering at the Qikiqtani General Hospital in Iqaluit after he was bitten late June 17 by two sled dogs chained outside a residence.

The dogs were from a team that had not yet been brought out of town, Igloolik’s senior administrative officer Brian Fleming said June 19.

Those dogs are now under quarantine for 14 days, Fleming said.

It’s preferable not to kill the dogs, he said, because then it’s hard to determine if they have rabies.

That would mean taking the dogs’ heads off and sending them to Alberta for analysis — “a big procedure.”

“We’d rather keep them alive and observe them,” Fleming said.

Sled dogs are usually kept on the sea ice or on land, but Fleming said that, with the rotting of the sea ice and melting of snow on the land, the moving of sled dogs outside town is in a “transition” mode.

The hamlet does not allow households to keep more than two dogs chained up at once, Fleming said.

As for rabies, this has been an issue in the community before.

Residents of Igloolik were on alert last summer for a potential rabies outbreak after a fox caught in Igloolik tested positive for the virus.

Then, the hamlet advised residents to report any sightings of foxes or loose dogs in and around the community.

At one point, people in the community resorted to carrying around hockey sticks to ward off any animals, Fleming said, and about 180 loose dogs were culled.