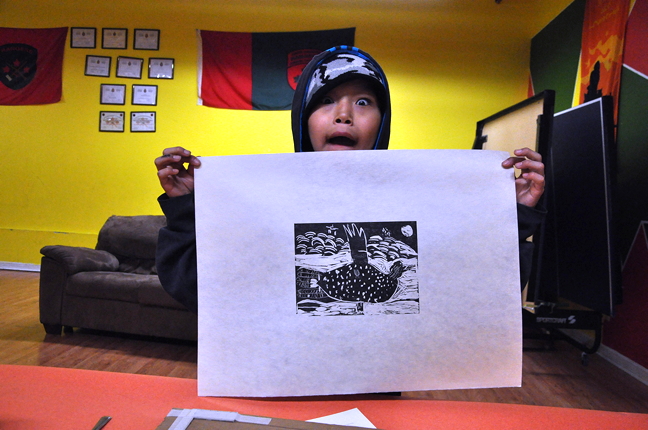 Moe Kelly, 11, shows off a print made from his own etching of a seal-duck hybrid animal in a workshop held at the Cape Dorset arena March 30. The Embassy of Imagination, led by Patrick Thompson and Alexa Hatanaka, is back in Cape Dorset this winter with a series of arts workshops to be held over three months. (PHOTO BY THOMAS ROHNER) 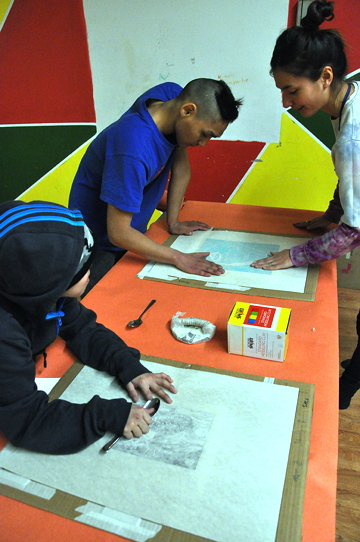 Alexa Hatanaka, right, helps 11-year-old Moe Kelly, near left, and Cie Taqiasaq, 18, with their linoleum etched print-making in the Cape Dorset arena March 30. Taqiasaq traveled with other Kinngait youths and Hatanaka to Toronto last summer for a two-storey mural project. This summer, Hatanaka said she and partner Patrick Thompson will take Cape Dorset youths to Montreal for a similar mural project. (PHOTO BY THOMAS ROHNER)

CAPE DORSET — Up the hill from Cape Dorset’s famed Kinngait Studio, young artists-in-waiting are learning the basics of print-making.

Kelly, who also hosts a local radio show, bends over his latest work: a linoleum etching of a seal-duck hybrid animal.

Where did Kelly get the idea for a seal-duck?

“From my mind,” said Kelly.

And what kind of monsters does Kelly like to draw?

“Monsters like the Arctic giant. He blows wind out of his breath, has a big beard and big hair, almost all over his body.”

The youth’s father works as a stone etcher in the Kinngait Studio and Kelly said he hopes to follow in his father’s artistic footsteps.

You can look to Alexa Hatanka and Patrick Thompson to learn more about the linoleum print workshop in which Kelly and other kids in town are participating.

Hatanka and Thompson have taken their arts program, called The Embassy of Imagination, into Nunavut communities for nearly 10 years, including to Cape Dorset in the last few years.

The pair brought eight young Kinngait artists to Toronto in the summer of 2015 to paint a massive mural in Canada’s largest downtown.

This year, the couple plans on spending three months in the south Baffin community, with the linoleum print workshop as the first in a series.

“The kids, if they don’t cut their fingers off, really take to it,” Thompson jokes, quickly adding there haven’t been any injuries.

Cie Taqiasaq, 18, was one of the artists involved in the Toronto mural.

“It was awesome,” Taqiasaq said, bent over a linoleum self-portrait.

“We met lots of people. Went to Niagara Falls, went to a cottage. And we were in Ottawa for Canada Day,” he said.

This summer, Hatanka said the Embassy of Imagination will take Cape Dorset youth to do a similar mural project in Montreal.

But before then, Thompson said the pair will hold clay and stone carving workshops.

“We try to tell the kids, the more pressure you have as an adult, with having your own family, the less risk you take. So working with clay, they can build up their imagination muscle and experiment more before carving something in stone,” Thompson said.

After the carving workshops, the pair will get local kids to create a crest for the main funder of their workshop series, the W. Garfield Weston Foundation in Toronto.

“The foundation decided to fund the entire workshop series, instead of just the one crest project, so they’ve been great,” Hatanka said.

And with the imagination and personality of kids like Kelly, the crest project should be successful, Thompson said.

“Whenever Mo comes to our house he always seems to leave a pungent odour behind. A gift.”

As Kelly, Taqiasaq, Thompson and Hatanka lined up for a group photo, Kelly decided to give the whole group another pungent gift.