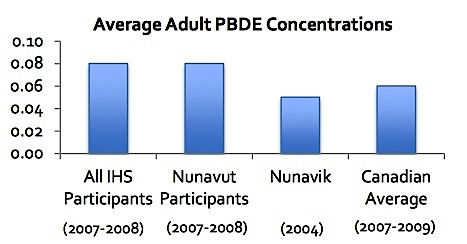 This graph from the Inuit Health Survey report shows blood levels of a toxic flame retardant are higher among the survey’s participants than southern Canadians.

Santa’s reindeer have come and gone in their annual Christmas journey over the North, but reindeer — and many other Arctic animals and people — may face health impacts from toxic flame retardants that are banned, but still present, in Canada.

A recent study found the feces of reindeer in Arctic Norway are full of flame retardant residues, linked to liver, thyroid, reproductive and neurological damage.

PBDEs have been used extensively as additives and flame retardants in commercial and household products for several decades, said the study’s lead author Zhen Wang and co-authors from the National Marine Environmental Monitoring Center in China in their research published in Chemosphere..

In the study, they analyzed reindeer feces samples collected in Ny-Ålesund on Norway’s Arctic Svalbard Islands and it’s there they found PBDEs.

While there’s no comparable study on the presence of PBDEs in Canada’s Arctic caribou, PBDEs have been found in glaucous gulls in Nunavut as well as East Greenland polar bears — and in samples from Nunavummiut who participated in the 2007-08 Inuit Health Survey.

PBDEs have been used widely in the United States since the 1970s as flame retardants in a variety of products, including plastics, furniture, upholstery, electrical equipment, electronic devices, textiles and other household products.

While the Inuit Health Survey maintains “Inuit in Nunavut are exposed to similar levels of PBDEs as Canadians living in the South,” a look at a graph shows the PBDE levels are higher in Nunavut, and among all participants in the survey, by about a third.

While there’s no guideline for safe PBDE levels for Canadians published by Health Canada, the risk of hyperactivity and cognitive deficits increases in kids with higher levels of PBDEs in the mother’s bloodstream, research has found.

And Environment Canada has said that the rapid increase in PBDE levels in the environment over the last several years is “cause for concern.”

The 2015 amendments expanded existing prohibitions for PBDEs to cover all PBDE substances and products containing them, except manufactured items.

Many manufactured items, not made in Canada, such as sofas, rug pads and mattress covers, still contain PBDEs. Residue from the flame retardants are also found widely in landfills where furniture containing the PBDEs often end up.

“Currently there is not enough scientific evidence to confirm whether or not PBDEs increase the risk of cancer in people,” says the Canadian Cancer Society.

But to limit your exposure to PBDEs, the Canadian Cancer Society recommends, among other things, that you:

• research a company’s policies before you purchase products — look for labels like “the upholstery materials in this product contain NO added flame retardant chemicals;” and,

• cover any exposed carpet pads or upholstery foam pads to reduce the amount of PBDEs released into your home or vehicle.

The presidents of Inuit Circumpolar Council-Canada and Inuit Tapiriit Kanatami both called earlier this month that the federal government should expand its longstanding Northern Contaminants Program and share more research results on studies on contaminants such as PBDEs.