“Toys for the North” brings toys to needy Nunavut kids 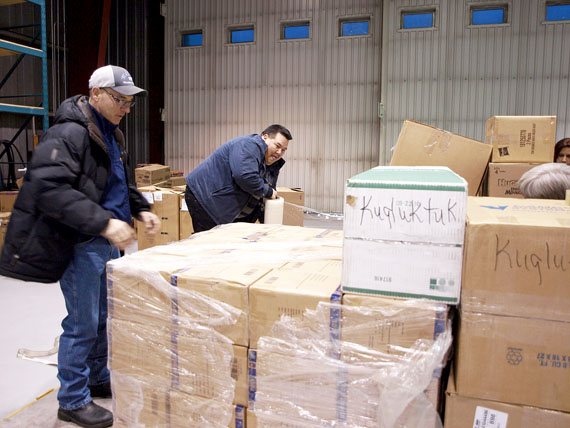 First Air’s Ed Picco (left), and the RCMP’s Jimmy Akavak (right), prepare a pallet full of toys to be shipped to communities throughout Nunavut. The toys were donated as part of the “Toys for the North” campaign, which first started during Toronto’s Santa Claus parade two years ago. The drive collects toys that are then distributed to 12,000 children throughout the North with the help of the RCMP and First Air. (PHOTO BY DEAN MORRISON)

And, like Santa Claus’ sleigh, it was loaded with toys bound for children in Nunavut.

Now that the toys have arrived, volunteers will sort, wrap, and ship the toys out to Nunavut communities on RCMP charters and regularly scheduled First Air flights.

Kids in need will be first in line for the toys, said Sgt. Greg Sutherland, RCMP organizer in Nunavut for Toys for the North, who’s been co-ordinating the toy distribution with communities in Nunavut, and contacting social services to provide lists of the underprivileged children.

Now that the toys have arrived, RCMP volunteers will sort the donated gifts depending on whether they’re for boys or girls.

Then comes the wrapping– a task made easier thanks to Hallmark’s $25,000 donation of wrapping paper.

Once the presents arrive in the communities, RCMP members will work with local elders and councils to get the toys delivered before Christmas.

These toys have a history — before arriving in Nunavut, they were in Toronto, where people donated more than $80,000 worth of new toys.

They gave the toys during last month’s toy drive at the Toronto Zoo and at the city’s recent Santa Claus parade — all part of the annual toy collection campaign in Toronto called “Toys for the North.”

This drive was started for one purpose, said Peter Beresford, president of the Toronto Santa Claus parade — “to provide children in some of the most remote and poorest areas of northern Canada the toys they may not otherwise get for the holidays.”

The Toronto Santa Claus parade’s organizing committee came up with the idea to collect toys for northern children two years ago.

Its committee members saw this as a perfect fit for Toronto’s annual parade.

“When the discussion came up to help children in the North through a toy drive, it just made so much sense to us. Santa comes from the North, so symbolically it was a perfect fit,” Beresford said.

Since ”Toys for the North” started, organizations like the RCMP, the Canadian Armed Forces, First Air, the Canadian Toy Association and the Toronto Zoo have all joined in to ensure the collection and distribution of toys runs smoothly.