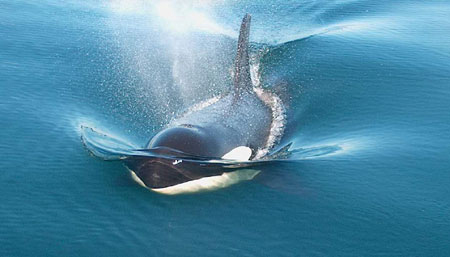 A newly-released study on the behaviour and diet of killer whales in the Canadian Arctic, which is based on interviews with Inuit hunters, may be proof that the science community is finally warming up to traditional Inuit knowledge, says a Nunavut Tunngavik Inc. wildlife adviser. (PHOTO COURTESY OF DFO)

Is a newly-released study on the behaviour and diet of killer whales in the Canadian Arctic proof that the science community is finally warming up to traditional Inuit knowledge?

University of Manitoba researchers recently interviewed more than 100 Inuit hunters and elders to gather information on the recent influx of killer whales into Nunavut waters, as the sea ice melts and enlarges their habitat.

Although little was known about the animal’s behaviour in new regions, scientists were able to hear first-hand from hunters who have observed killer whales, or aarluk in action for many years.

“Our hope is that [other Arctic-based research] will take traditional Inuit knowledge more seriously,” he added.

And in the case of killer whales, Irngaut says scientific research cannot always account for outlying factors, such as how the behaviour of new predators impacts the movement of narwhal.

When there are groups of killer whales on the hunt, narwhal tend to flee and seek refuge in fiords, he said.

So biologists may not see the narwhal while doing surveys of the animal in its normal habitat, Irngaut explained, which can account for smaller quotas – which means smaller Inuit harvests.

That is one example of the ongoing gap between the Inuit and scientific points of view, he said.

But the question of killer whales steadily increasing in number across the eastern Arctic is not up for debate.

“From talking to my late father, killer whales have always been here, but they were rarely seen,” Irngaut said. “Now, the increase of whales into the region has become a fact.

“We’re starting to see them in areas where they’ve never been, like Foxe Basin and Admiralty Inlet.”

The study suggests that melting sea ice is attracting more killer whales to Nunavut, where the whales are preying on mammals like seals, belugas, narwhals and even the much larger bowhead whale.

It also gives a voice to Inuit hunters’ concerns that, as the sea ice continues to melt, they will have to compete with the giant predators for the marine wildlife they hunt for food.

Many Inuit hunters spoke of something they call aarlungyuk, a fear or an awareness of the killer whales’ presence which causes prey to flee.

“You can really tell when you see a group of [narwhal or beluga] whales in shallow waters, that they are seeking refuge,” Irngaut said.

That same fear is felt among Inuit hunters, Irgnaut says, which will likely prevent aarluk from becoming a popular marine harvest in Nunavut any time soon.

“People are normally afraid of the killer whale, because of the way they chase after boats,” he said. “They’re not scared of humans.”

Although there are no regulations around the hunt of killer whales in the territory, they have never been regularly harvested in Nunavut.

Irngaut said his father told him of one incident about 30 years ago near Igloolik, where a group of killer whales were found stranded on the ice in Foxe Basin.

Hunters killed one of the whales, although they used most of the harvested meat to feed dogs.

Irngaut said the skin of the killer whale is much thinner than that of the narwhal or bowhead.

Another young killer whale reportedly swam into Baker Lake in the 1970s, where it was killed by local hunters who feared it would deplete local fish stocks.

It’s unknown if the animal’s meat was harvested.