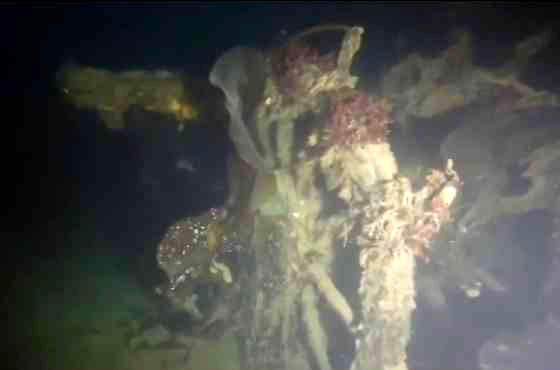 The water around Sir John Franklin’s HMS Terror, in Terror Bay, Nunavut, isn’t the only murky thing related to its discovery. The Government of Nunavut prevented Parks Canada’s permit from including Terror Bay in its 2017 search parameters saying there was no historical significance there. But a month prior, the GN granted their own staff permission to search for a ship in Terror Bay. (ARCTIC RESEARCH FOUNDATION PHOTO)

The legality of the search, and other revelations, were embedded in a series of documents and emails obtained by Nunatsiaq News related to the historic discovery made last September in a bay about 120 kilometres west of Gjoa Haven.

And while RCMP “V” Division media spokesperson David Lawson confirmed April 21 that no charges will be laid in the matter, the investigation still raises questions about how government agencies coordinate cross-jurisdictional projects of national importance.

Documents acquired through an access-to-information request reveal a skirmish behind the scenes over who was authorized to look where, when and why.

The permit prohibited the team—of which the Bergmann was a member—from surveying Terror Bay.

Terror Bay, the GN said, “is not approved as an alternate survey site,” which is what Parks Canada had initially proposed in case ice prevented access to the Victoria and Alexandra Straits—where they thought the elusive Terror might rest.

“There is no historical, oral historical or archaeological evidence identifying Terror Bay as a possible location for one of the Franklin wrecks,” the GN said, in a conditions letter attached to the 2016 Parks Canada archeological permit.

But that’s a puzzling thing for the GN to say because it contradicts a long history of stories of Franklin camps and possible artifacts found near the Terror Bay shoreline and third-hand reports of pilots claiming to have spotted a shipwreck’s silhouette in the bay’s shallow waters while flying overhead.

It’s also puzzling because the GN permitted Doug Stenton, then-Heritage Director for the Department of Culture and Heritage, to look for a wreck in Terror Bay at about the same time as the Parks Canada-led expedition.

In fact, Stenton’s archaeological permit—awarded to Stenton and a University of Waterloo academic partner—was issued in July, a little over a month before Parks Canada was turned down to look in the same area.

“Inuit in the 19th century reported a large Franklin camp in Terror Bay, containing the remains of many men and artifacts,” said a summary of Stenton’s permit proposal. It also mentioned recent Inuit reports from 2015.

“Time and weather permitting, an aerial search will also be conducted in eastern Terror Bay in an attempt to locate a sunken vessel reported at the location by Inuit.”

Stenton’s fieldwork in Terror Bay was set to start about the same time that the Franklin Expedition planned its search, from mid-August to mid-September, according to a letter sent by Stenton to the Hamlet of Gjoa Haven.

Stenton’s search of the bay was meant to address recent reports of a ship, not the earlier historical record, and Inuit testimony of Franklin survivors in the area Alex Stubbing, current Heritage Director for the GN’s Department of Culture and Heritage, told Nunatsiaq News April 12,

“Terror Bay wasn’t really a search priority for Parks Canada last year, or had it ever been since 2008 [when they took over the expedition],” Stubbing said. “In hindsight, we probably could have added a little more wording there.”

Stubbing denied there was any competition between Nunavut and Parks Canada to investigate Terror Bay and in fact, they had a good working relationship, he added.

But it’s interesting to note that Stenton, as the benefactor of the earlier permit and acting within the GN, gave input and advice on whether Parks Canada could visit Terror Bay.

Stubbing became Heritage Director after Stenton stepped down in March 2016 but the two men effectively shared the role for months and Stenton maintained a mentorship role, especially regarding the Franklin file.

As the GN and Parks Canada wrangled over permits and maps, the Bergmann crew sailed to Terror Bay and found the long-lost ship.

The Arctic Research Foundation has insisted that the Bergmann went to Terror Bay because Sammy Kogvik, a Canadian Ranger from Gjoa Haven, told the crew he had seen a ship mast sticking out of the ice years earlier, one of many modern testimonies about something strange in the bay’s waters.

The news of the Terror’s find, delivered to the GN and Parks Canada in a Sept. 12 news story in The Guardian, a week after the actual discovery on Sept. 3, came, by all accounts, as a shock, since ARF had initially talked only to a reporter about the find and not to its Parks Canada partners.

E-mails confirm that Stenton contacted the Arctic Research Foundation for a long list of details and timelines relating to the discovery shortly after the news broke.

The Arctic Research Foundation claimed, in correspondence with Nunatsiaq News through its lawyer, that it never saw the 2016 permit. (Parks Canada confirmed this separately to Nunatsiaq News.)

The Foundation also said it was unaware at the time of discovery that it had violated the GN’s permit restrictions.

So the Terror had been unexpectedly found but the search had contravened the GN’s permit. This put the GN in an awkward position.

A day after the Terror was located, the GN quietly removed its condition prohibiting the Parks Canada-led expedition from entering Terror Bay.

That information was contained in a Sept. 13 email from Stubbing to Parks Canada approving Parks Canada’s request to remove that condition.

This was done, Stubbing said, to allow Parks Canada to legally visit the site and to confirm that the vessel was indeed the Terror.

Looking back at the unsupervised actions of the Bergmann, the GN is now re-evaluating how it certifies multi-partner missions in Nunavut, Stubbing said.

Now that the Terror and her sister ship, the HMS Erebus have been found, the roles of the GN and Parks Canada will change from exploration to stewardship—both of the ships themselves and the many artifacts which are likely to be salvaged.

That appears to be progressing smoothly. An interim advisory committee is laying the groundwork for a new heritage facility in Gjoa Haven, as well as concluding negotiations for ownership to the relics between Nunavut, Canada, the Inuit and the United Kingdom.

The Arctic Research Foundation signed on as a partner with Parks Canada for Franklin searches in 2011 and that agreement was later extended to 2017. It’s unclear now if the organization will continue as a partner beyond that point.