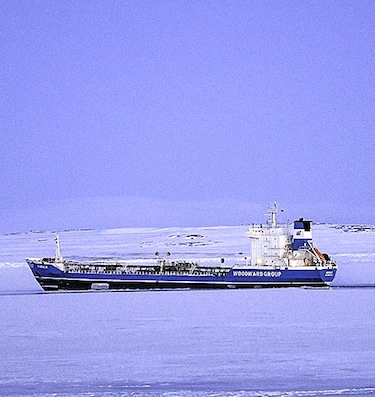 A late-season delivery of fuel to Rankin Inlet caused problems for the Woodward Group’s tanker, the Dorsch, in November 2014, when the tanker was stuck in heavy ice. (FILE PHOTO)

The International Maritime Organization has adopted strict new environmental rules for ships operating in the Arctic and Antarctic seas, following a meeting of the IMO’s marine environment protection committee that wrapped up May 15 in London.

The new global environmental regulations for polar shipping are part of a regulatory package that includes a new set of safety rules adopted this past December, an IMO news release said May 15.

The environmental rules include:

• a prohibition on any discharge of oil or oily substances into Arctic and Antarctic waters and a rule stating that oil fuel tanks must be separated from the outer shell of the ship;

• a prohibition against discharge of “noxious liquid substances” or mixtures of such substances;

• a prohibition against the discharge of garbage;

• ground food waste may be discharged, but not onto ice or in areas less than 12 nautical miles from land; and

• sewage may not be discharged unless it is disinfected.

The code will apply to all new vessels constructed after Jan. 1, 2017.

But the new Polar Code still has critics.

The organization, Friends of the Earth, said in a May 15 release that the IMO omitted many important issues from the environmental portion of the new code, namely, a ban on heavy fuel oil use by vessels in the Arctic.

Eliminating heavy fuel oil use would have the dual benefit of reducing oil spill damage risk and decreasing black carbon emissions, Friends of the Earth said.

“Increased shipping in the Arctic — which is experiencing the acute effects of climate change — threatens the region’s ecology, its residents and their traditional subsistence practices. The IMO must include measures that are precautionary, comprehensive and robust in order to truly protect the region from the impacts of shipping,” said John Kaltenstein, marine policy analyst at Friends of the Earth and participant in the IMO negotiations, in the release.