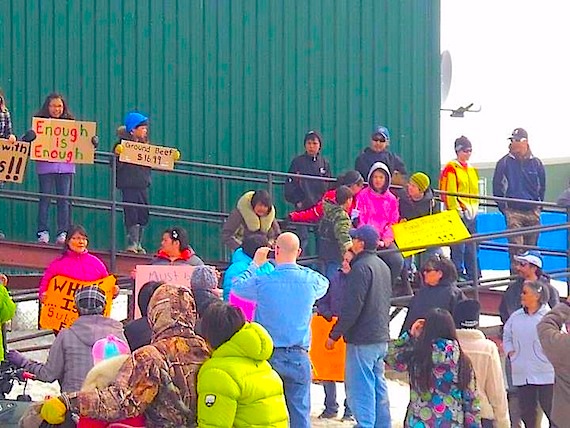 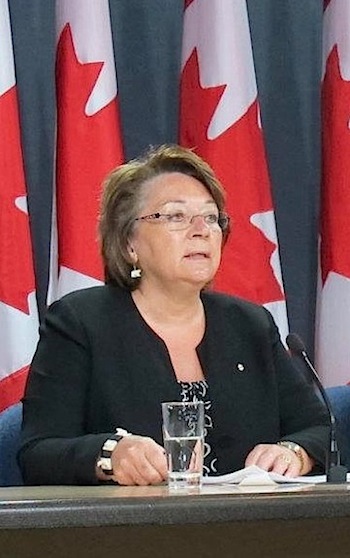 Mary Simon, the president of Inuit Tapiriit Kanatami, says a “greater investment… is needed if Inuit are to ever realize the right to food” May 16 during news conference organized by Food Secure Canada, a group focused to improve food security in Canada. (PHOTO COURTESY OF ITK)

Mary Simon, the president of Inuit Tapiriit Kanatami, said May 16 that she agrees with a United Nations special envoy sent to Canada to review access to food in the country: Canada’s aboriginal peoples need help gaining access to nutritious food.

Simon met with Olivier De Schutter, the UN special rapporteur, who specializes on peoples’ right to food, during his 11-day trip to Canada — his first trip to a developed country since he started work in 2008.

“During the meeting we were able to discuss the unique challenges Inuit face in attaining the right to food,” Simon said during a news conference organized by Food Secure Canada, a group focused on improving food security in Canada.

Factors such as cost of food, lack of availability, variety and quality of foods, low income rates, climate change and environmental contamination negatively affect access to food in Inuit communities, she said.

In his May 16 “end of mission” statement, De Schutter described Canada as rich, but not doing enough to give Canadians an acceptable amounts of accessible food. He called for Canada to adopt a national right-to-food strategy.

His trip took him to poor inner-city neighbourhoods in central Canada, where he said he heard from families on social assistance who can’t afford to feed healthy foods to their children.

He also travelled to remote aboriginal communities in Manitoba and Alberta, where he said he saw “very desperate conditions and people who are in extremely dire straits.”

“What I’ve seen in Canada is a system that presents barriers for the poor to access nutritious diets and that tolerates increased inequalities between rich and poor, and aboriginal [and] non-aboriginal peoples,” De Schutter said in his report.

De Schutter noted food insecurity in northern communities can be as high as 79 per cent — that is, with eight in 10 people going hungry.

He called for a “structural approach to tackling the socio-economic and cultural barriers,” which keep people from eating well, and said he wants everyone in Canada to eat as well as people who live in the southern regions of Canada.

“Neither the federal government nor the provinces consider that they have a responsibility to support off-reserve aboriginal peoples in overcoming the structural discrimination they face,” De Schutter said.

Many in Nunavut say they continue to have trouble paying for food, despite the new Nutrition North program to offset the transportation costs of food north.

Recently people in Coral Harbour held a protest at the community’s local stores to show their anger over their high food prices.

“It is an unfortunate reality that a lack of available, accessible and adequate food continues to be an everyday struggle for many Inuit living in northern Canada,” Simon said May 16.

Programs such as Nutrition North have been developed to try to meet the needs of Inuit communities, she said.

But even with the subsidy, the prices of basics such as eggs, milk, sugar, and flour are still two or three times higher in the Arctic than they are in southern Canada, she said.

“A greater investment in this area is needed if Inuit are to ever realize the right to food.”

Meanwhile, the average Inuit income is one third less than the average Canadian income and prevalence of food insecurity is very high in northern Inuit communities, she said, citing research that shows seven in 10 households lack food.

“This is six times higher than the Canadian national average. It is also the highest documented food insecurity rate for any aboriginal population residing in a developed country. And this is not acceptable in the Canada that I live in,” Simon sad.

On May 16, the Government of Nunavut also stepped up to address the food insecurity issue: it’s planning on creating a food security coalition to ensure people are fed properly.

Now, the coalition — comprising of Nunavut Tunngavik Inc. and a few other groups from around the territory — will start to take action by providing nutritious, low cost recipes that will hit local grocery stores in September, according to news reports.

You can read the report that ITK and the Inuit Circumpolar Council presented to the UN special rapporteur, Inuit and the Right to Food: Submission to the United Nations Special Rapporteur on the Right to Food for the Official Country Mission to Canada, here.