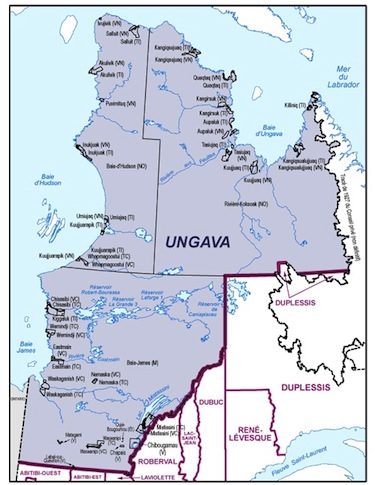 Which candidate will win the Ungava riding in the Sept. 4 Quebec election is still up in the air, with candidates from the Liberals, the PQ, the CAQ and Québec Solidaire still courting votes from Nunavik. (FILE IMAGE)

With the most recent CROP poll showing the Parti Québécois poised to win the Sept. 4 election with 33 per cent of the vote, Gérald Lemoyne, the Liberal candidate in the Ungava region, which includes Nunavik, is looking to pick up some last-minute votes in Kuujjuaq.

Lemoyne, scheduled to arrive in Nunavik’s largest community Aug. 31, plans to meet with local and regional leaders during his 36-hour stay and get out into the town to shake hands and attract potential Liberal voters.

Lemoyne, the mayor of Lebel-sur-Quévillon, said Aug. 30 that he’s encouraged by the support he’s received in the southern portion of the riding where he lives.

If elected, Lemoyne — the sole candidate to actually visit Nunavik during this election — vows he’ll visit all Nunavik communities as quickly as possible.

A public opinion released Aug. 30 by Forum Research suggests the Liberals — whose Plan Nord development scheme is a major plank in their platform — are trailing in second place across the province with 28 per cent of the vote.

The same poll shows the PQ in first place with 33 per cent and the Coalition Avenir Quebec in third place with 27 per cent.

In the 2008 Quebec election, the PQ’s Luc Ferland, who’s hoping to get re-elected for a third term, won by little more than 1,000 votes.

With only eight per cent of Nunavik voters having cast ballots in advanced polls, there are still many left in the region who will be able to vote next Tuesday.

Ferland, for his part, is asking people to get out and vote.

The Ungava riding had the lowest voter turnout rate in Quebec in 2008 with only 36.08 per cent of eligible voters casting ballots — and that voter percentage was even lower in the northern parts of the riding.

“I’ve visited all the places and municipalities in our region and during our meetings, you have frankly and honestly told me about challenges you have and your concerns for the development out our large region,” Ferland said this week.

But this election is not just a battle between the PQ and the Liberal parties: Lemoyne and Ferland face a new opponent.

In Ungava, he’s the CAQ candidate, Stéphane Robichaud, an accountant who has previously visited Nunavik for his work.

The CROP poll published Aug. 29 suggests the new party could win up to 28 per cent of the vote — slightly ahead of the Liberals, who sat at only 26 per cent in that poll.

“Our party is currently second in the polls and I believe second in the Ungava polls too, behind the PQ incumbent,” Robichaud told Nunatsiaq News.

“A small push, maybe 500 or 600 votes could make the difference. This is a once-in-a-lifetime situation for Nunavik voters. They have the power to make a difference in this election.”

Among the CAQ’s promises: no changes to Quebec’s Bill 101 language legislation and educational reform which, Robichaud said, could lead to a region-wide school breakfast program in Nunavik.

“The program provides breakfast for kids and usually has positive effects lowering drop-out rates. It will also contribute to alleviate financial hardship for families across the 14 villages,” he said.

Robichaud also said he intends to visit the communities “as soon as I am elected.”

“I want to get to know as many of the Nunavik electors as possible and maybe enjoy some fishing before the ice takes over,” he said.

While the Quebec Solidaire is expected to pick up only seven or eight per cent of the Quebec-wide vote at the very most, its Ungava candidate Sylvain Couture, a doctor who has worked in Nunavik, said Québec Solidaire invites Nunavimmiut to refuse Plan Nord “because it proposes only a tiny bit of what northern communities can get from exploitation of those resources.”

“Communities should stand up and ask for better housing programs, better protection of Inuit women and children, and better access to higher levels of education,” he said. “Nunavik should stand up to obtain better autonomy at all levels for its development, and protection of the Inuit culture and language.”

Also running in Ungava is Dominic Hamelin-Johnston, an agriculture student, for the Option Nationale.

Voters in Nunavik should have already received a reminder card listing the official candidates.

To vote, you have to establish your identity by presenting a document like your health insurance card, your driver’s license or your Canadian passport.

On polling day, Sept. 4, your employer must give you at least four consecutive hours to go and vote when polls are open, from 9:30 am to 8 p.m.

If you’re wondering where the polling station is (in Nunavik, usually the municipal office or school), or whether you’re registered, you can find out here.