Ungava MNA thanks Nunavik voters, promises to work with Inuit

“For the first time in history, a citizen in Nunavik, has been elected as a member of this assembly” 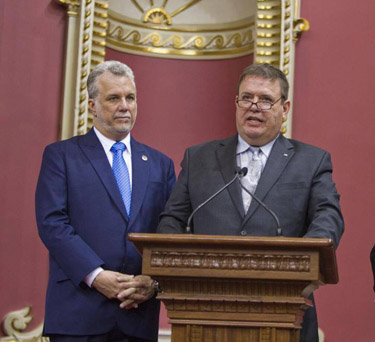 Ungava MNA Jean Boucher’s inaugural speech in Quebec’s National Assembly May 26 highlighted his commitment to work with the Aboriginal population is his riding.

Boucher’s speech also included snippets of Inuktitut and words of thanks to his friends and colleagues in Kuujjuaq, the community which Boucher’s family has called home since 2007.

“Today is a great day. For the first time in history, a citizen in Kuujjuaq, in Nunavik, has been elected as a member of this assembly,” Boucher said.

“For the first time ever in a few weeks, a member [of Quebec’s National Assembly] will have his constituency office located in Nunavik — Kuujjuaq more precisely.”

Boucher attempted to speak some Cree in his address, but more than once switched from French into Inuktitut, to express thanks to his Nunavimmiut constituents, whom he called his “adoptive family.”

“A people who have always survived in climatic conditions that are among the toughest in the world,” Boucher said.

“I heard colleagues complain about putting up campaign signs in minus 20 degrees Celsius, it was terrible,” he said. “I invite them to come and post signs in Nunavik next time.

“However, the biting cold cannot resist the warmth of the Inuit,” Boucher continued. “Inuit people, you are talented, strong and courageous.”

Boucher, who has been named parliamentary assistant to Quebec’s minister of Aboriginal Affairs, Geoff Kelley, repeated his commitment to work alongside Quebec’s Cree and Inuit nations.

Boucher has said he hopes to hire an Inuk employee to staff his Kuujjuaq constituency office.

He’ll also open a secondary office in Chibougamau, the riding’s administrative hub, as well as an office at the National Assembly in Quebec City.