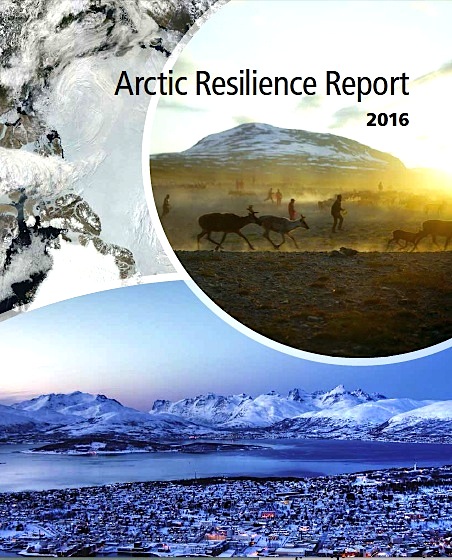 At 240 pages, the Arctic Resilience report contains a lot of information about the threats to the Arctic and how its residents can face them.

This week, several Nunavut communities, including Cambridge Bay and Rankin Inlet, are forecast to get near record-breaking warm temperatures—as much as 15 C above the chilly normal ranges for this time of year—while Arctic sea ice extent continues to hit new lows for November.

In the midst of this warming trend, a new report, called “Arctic Resilience” looks at how Arctic peoples can survive climate change and build resilience—defined as a capacity to cope with stress and shock.

But, somewhat optimistically, the report appears to suggest that an organization like the Arctic Council, now heading into its third decade, could lead the way in bolstering resilience, because the effort needs a “multi-scale enterprise that draws on the different types of capacities and competencies available at the local, regional and national, pan-Arctic, and even global levels.”

The Arctic Council’s eight-nation members, which include Canada and the United States, faces the challenges of change itself due to the November election of Donald Trump, who previously called climate change a “hoax,” to the U.S. presidency.

The Arctic Council commissioned the 240-page report from the Arctic Resilience Assessment Secretariat at Stockholm’s environment institute and resilience centre.

The report, first introduced in 2013, says Arctic peoples can manage to adapt to climate change.

But that won’t be easy.

The report also examines 19 tipping points in the Arctic environment, which it calls regime shifts—that is, large, abrupt, persistent changes, believed to be underway or possible—such as a shift to sea-ice free summers, changes in the oceans’ circulation, the collapse of various Arctic fisheries and changes on the land.

These regime shifts will have substantial impacts on wildlife, the availability of food from nature, the stability of the climate, and Arctic people’s sense of place and well-being, the report says.

“While some changes, such as warming temperatures, are gradual, others, such as the collapse of ice sheets, have the potential to be not only abrupt, but also irreversible. This means the integrity of Arctic ecosystems is increasingly challenged, with major implications for Arctic communities and for the world as a whole,” the report says.

The solution—in addition to looking at ways to curb global warming—lies in building resilience in the Arctic, the report argues.

That’s an “urgent, immediate need across the region, and while the challenges of Arctic change are great, the people of the North have a long history of successfully navigating uncertainty and fluctuating conditions,” it says.

The report also offers examples of how communities can identify and respond to challenges, as well as resolve conflicts and disagreements.

The report includes 25 case studies, such as Cape Dorset, which has used art to prosper, and Igloolik, where the resiliency effort appears less successful due to weakening of “Inuit culture and social networks based on sharing food.”

Well-documented and readable, with lots of references and illustrations, its editors still some managed to miss misspellings of Iqaluit, which took on extra “u”— Iqualuit.”

You can read the entire report here.