“We’re going to have to reinvest for that capability” 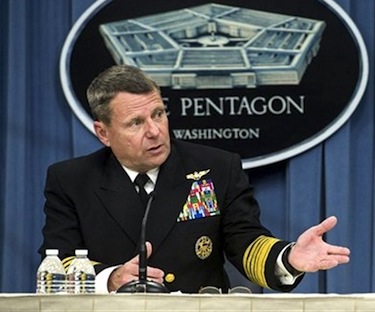 The United States and Canada plan to replace the radar along the North Warning sites across the Canadian Arctic, suggested Admiral William Gortney, head of the Canada-U.S. National Aerospace Defense Command (NORAD) and of the Northern Command, at an April 7 news conference in Washington, D.C.

Gortney said that, in about 10 years, the current tracking equipment will “reach a point of obsolescence and we’re going to have to reinvest for that capability.”

“The question is, what sort of technology do we want to use to reconstitute that capability? We don’t want to put in the same sorts of sensors, because they’re not effective against the low-altitude, say, cruise missiles. They can’t see over the horizon.”

As the U.S. prepares to assume the chair of the Arctic Council in Iqaluit later this month, the Arctic appears to have moved on to NORAD’s agenda, North America’s aerospace warning and aerospace control centre run jointly by Canada and the U.S., with headquarters in Colorado.

“We view the Arctic as an emerging operating area with much yet to be defined,” he said.

Gortney said NORAD’s Arctic road map calls for “persistent domain awareness, robust communications, deployable forces, and infrastructure in the Arctic to support our responsibilities and missions in this region.”

This means having forces that are trained and equipped for the Arctic as well as “limited infrastructure that can be scaled for contingencies.”

Gortney also noted that the Arctic Council is “a valuable forum for non-security-related Arctic governance.”

“We will continue our collaboration with like-minded Arctic nations and look forward to supporting the United States Arctic Council Chairmanship beginning in 2015.”

In the early 2000s, Inuit in Canada and Greenland reacted to the U.S. National Missile Defence plan for anti-ballistic missile radar and communication systems in several places across the Arctic, including the U.S. Air Force base in Thule, Greenland.

The plans would defend the U.S. against nuclear missile attacks from so-called “rogue” states such as North Korea and Iraq. Using a network of satellites and land-based stations, the system would detect nuclear missiles aimed at the U.S. and dispatch interceptor projectiles to knock them down.

The NMD system would rely on missiles launched from ships or land, as well as lasers fired from modified aircraft.

But to make the proposed system work, the U.S. had to have radar and missile sites circling the Arctic.

Then, in 2004, high-level officials from Greenland, Denmark and the U.S. met in the sheep-farming village of Igaliku to sign three deals, which would also allow the U.S. to move ahead with its missile defence program.

Since then radar sites in Alaska and Thule have been upgraded.

The former Liberal government decided in 2005 not to join up with the missile defence plan.

But last year Prime Minister Stephen Harper said while “it was our judgment in the past that Canadians did not need the security of participation in the anti-ballistic missile defence system. Obviously there are changes occurring in the world and we will continue to examine whether that does or does not serve Canadian interests and we will make whatever decision is in the best security and safety interest of Canadians.”

Climate change appears to be a key in raising NORAD’s interest in the Arctic and updating Canadian defence capability.

“Well, the Arctic ice pack is receding. I mean that’s clear. We see that every year. We see it receding and so the question is now: as it recedes, how much more commercial activity is going to be up there in the form of transportation… resource extraction? Will companies and nations go up there for resource extraction, you know, oil, gas, minerals?” Gortney said on Colorado Public Radio.

“What does that mean in the future?’ And that’s what we’re trying to determine.”