NOAA will use data-collecting sensors on land, sea and sky 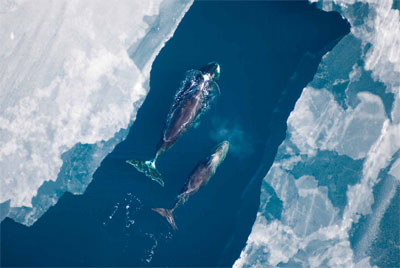 Bowhead whales swim through ice in the Beaufort Sea. (PHOTO BY A.BROWER/NOAA)

The U.S. National Ocean and Atmospheric Administration has announced a five-year-long project to help better understand and predict weather and changing climate in its Arctic region.

The initiative is part of NOAA’s newly-released Arctic action plan, a document that lays out how the agency plans to support the U.S.National Strategy for the Arctic Region.

That strategy, released in May 2013, puts a focus on international co-operation, protection of U.S. interests, and more use of scientific research and traditional indigenous knowledge.

As part of its plan, the NOAA — an agency of the U.S. government that looks at ocean and atmosphere conditions — now pledges to improve its Arctic weather and water forecasts and warning systems.

NOAA acknowledges that its prediction capabilities are poorer in the Arctic than anywhere else in the United States due to a lack of data.

To improve on that, the agency hopes to gather more scientific research to understand Arctic climatic changes and their effects, through the use of land, see and satellite-based sensors.

“Major challenges for long-term modeling being addressed by NOAA include the lack of good physical data regarding winds and clouds,” the plan notes.

“Although accurate forecasts and models depend upon the availability of observations, existing observations in the Arctic are very limited in both geographic scope and frequency.”

Since the 1980s, the report notes that 75 per cent of Arctic sea ice volume has been lost, and there are consistently more than 300 kilometers of open water north of Alaska every summer.

The NOAA’s plan, released April 21, calls for improved management of Alaska’s marine and coastal resources, including fishery and marine mammal stock assessments, as well as increased support for its Arctic communities.

The plan also calls for cooperation with other Arctic nations like Russian, Norway and Japan on marine research programs.

The NOAA says it will continue its leadership role in the Arctic Council, which the U.S. will chair from 2015 to 2017.