Coun. Kenny Bell: basic infrastructure “is dying and we need to fix it” 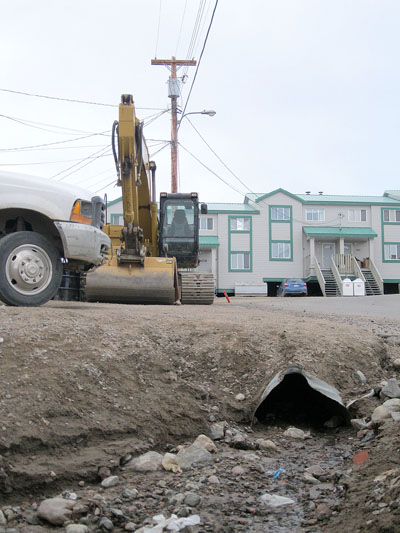 Iqaluit’s road infrastructure is in dire need of upgrades, according to city councillors Kenny Bell and Terry Dobbin. Bell’s proposal to use the city’s entire 2013 reserves fund for roadwork sparked debate about funding priorities at the June 20 finance committee meeting. (PETER VARGA)

The decrepit state of Iqaluit’s roads gained centre stage at city council’s finance committee of the whole meeting June 20, when Coun. Kenny Bell tabled a proposal to take all $10.8 million sitting in the city’s reserve funds and give it to the public works department – for road repairs and upgrades.

The proposal immediately drew words of caution and opposition from four of the six councillors in attendance, who pointed to the lengthy list of projects the city has committed to.

A new landfill and waste disposal site, a new cemetery, a $40-million swimming pool, and expansion of city development are among those top projects.

“I don’t want to take away from every other project in the city. That doesn’t make any sense,” said Coun. Romeyn Stevenson, chair of the finance committee. “I think it would be a rash mistake to move that money anywhere.”

John Hussey, the chief administrative officer, cautioned against eating into the city’s reserve funds, several of which must stick to their assigned use according to territorial law.

He suggested council should prioritize funding instead.

“Maybe it’s time to sit down and look at the whole nine yards right across the board, everything the city has to build going forward,” he said.

Bell and Coun. Terry Dobbin insisted that roads infrastructure should be the city’s top priority.

“In my opinion basic infrastructure is number one, and it’s falling down around us,” Dobbin said.

“I’m not against a $40 million aquatic centre,” he said, adding that the city “can’t afford it at this time.”

“Our basic infrastructure is dying and we need to fix it,” Bell said.

“That’s where my hesitation towards that one project is. We need to fix this before me move into the Cadillacs of our infrastructure.”

“We spent $12.5 million with the government in 2008-2009 for paving,” Hussey said, recalling that the city covered 21 kilometres of roads at that time.

The city laid down a three-inch-thick layer of asphalt instead of 1.5 inches, he said, to ensure it had “a long life expectancy.”

Bell said Iqaluit’s road troubles are not limited to paving.

A recent city report on the overall state of the road network showed most were in disrepair, he said.

Public works director Keith Couture brought the same concerns to city council in May, when he described his plan of action to improve the road network.

“This is a big problem, and we know it’s a big problem. It’s going to cost way more than $11 million in the long run,” Bell said, referring to the city’s reserve funds.

Iqaluit’s roads take on more vehicles every year, said Coun. Dobbin, and this could point to a solution.

“We’ve got 5,000 vehicles in this town,” he said. “Action’s got to be taken. Let’s possibly do a road fund, if you guys (councillors) are not in favour of taking money from the reserves.”

A tax on the purchase of new vehicles or a levy on tire purchases could help pay for the roadwork, he said, if the city can enlist the support of the Government of Nunavut.

Dobbin said to the province of Quebec has done just that in an effort to fix its roads.

“Let’s get a road reserve. Because in my opinion, basic infrastructure is number one.”