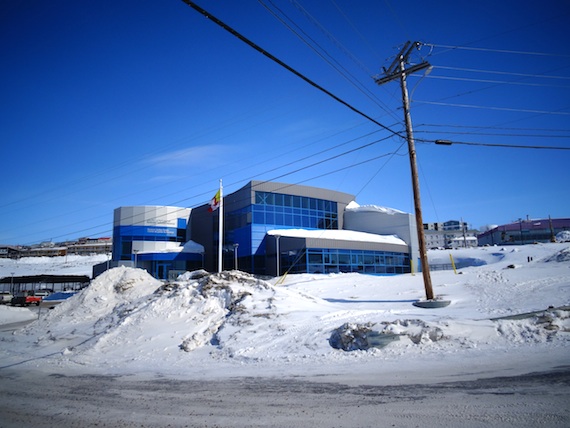 The Nunavut Justice of the Peace Court meets April 27 at the Nunavut Court of Justice in Iqaluit. The next session is scheduled for May 4. (PHOTO BY JANE GEORGE)

If you want to listen to sad stories that reveal the difficulties many live with in Nunavut’s capital city, and to gain insight into the use of Gladue reports, you can always go to the Nunavut Court of Justice in Iqaluit.

Nookiguak appeared on four charges, including mischief, theft and breach of conditions from the autumn of 2016. Among other things, these charges were linked to his being found intoxicated with a bottle of vodka in the Anglican Parish Hall and having been recorded by security footage while ripping several hand sanitizers off the wall at the Qikiqtani General Hospital.

For these charges, to which he pleaded guilty, Nookiguak would receive a 45-day sentence from Justice of the Peace Nicole Simka and a $100 surcharge to pay over a year, instead of four separate surcharges on the four offences he faced.

But that sentence was imposed only after the court heard how Nookiguak ended up homeless and in trouble and learned more about his addiction to alcohol, which developed at a young age.

When Nookiguak was a young child, he would find beer in the refrigerator to drink, Hughes told the court.

Nookiguak, originally from Iqaluit, but adopted out to grandparents in Qikiqtarjuaq, had done pretty well for many years, according to what Hughes said.

He finished Grade 10 in Qikiqtarjuaq and worked for Canadrill Ltd., a drilling contractor based in Iqaluit, for 21 years.

But Nookiguak lost his job three years ago due to his alcoholism, which he was unable to overcome, even after two stints at the Mamisarvik treatment centre in Ottawa.

“He is remorseful for what happened,” Hughes said.

Nookiguak would like to return to Mamisarvik for another treatment cycle, his lawyer said.

Nookiguak also stood up to apologize to the court.

Simka noted Nookiguak’s apology, before accepting the joint submission from the defense and prosecution for a 45-day concurrent jail sentence.

“You have worked for a long time and gained employment training,” she told Nookiguak as he stood in the courtroom.

She said the Gladue principles could apply in Nookiguak’s case.

These flow from a 1999 decision of the Supreme Court of Canada. They’re used in reports from sentencing Aboriginal offenders and are supposed to take into account Aboriginal peoples’ historic and social hardships, such as the effects of poverty, suicide, residential school and dispossession.

You can read more about the Gladue principles in lawyer James Morton’s Legal Ease commentary of April 27 for Nunatsiaq News.

“I hope and wish that you take the opportunity to get some help,” Simka told Nookiguak, before sheriffs led him out of court to start his sentence.