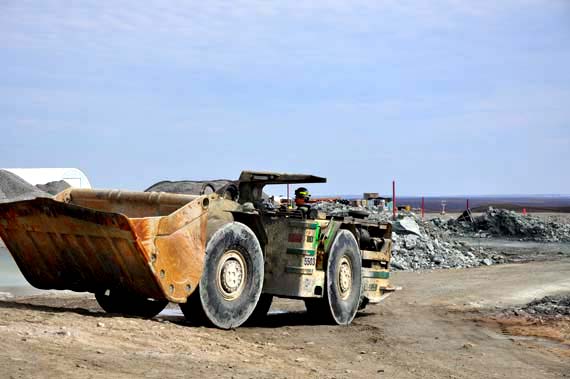 A scoop tram operating near Meliadine’s underground operation at its Tiriganiaq deposit. (PHOTO BY SARAH ROGERS)

Nunavut’s future appears flecked with more gold after the process leading towards a second gold mine in the territory took a big step forward this week.

That’s after the federal government accepted the Nunavut Impact Review Board’s recommendations — submitted in October 2014 and anchored by 127 terms and conditions — to approve the Meliadine gold mine in the territory’s Kivalliq region.

“It is evident that the board met its primary objectives … to protect and promote the existing and future well-being of the residents and communities of Nunavut, to protect the eco-systemic integrity of the Nunavut settlement area and to take into account the well-being of residents of Canada outside of the Nunavut settlement area,” Bernard Valcourt, minister of Aboriginal Affairs and Northern Development, said in a Jan. 27 letter to the review board.

The board issued its own letter Jan. 27, emphasizing the importance of the terms and conditions attached to its recommendations for the proposed project, owned by mining firm Agnico Eagle — which operates Nunavut’s only working gold mine at Meadowbank, about 70 km outside Baker Lake.

“The board would like to ensure that all associated terms and conditions are clearly understood by the responsible parties and are clarified where necessary to allow for full implementation and incorporation into applicable regulatory instruments,” wrote Elizabeth Copland, the board’s chair.

The Meliadine project, about 24 kilometers north of Rankin Inlet, would consist of one underground mine and five open pits, with a network of access roads, including, eventually, a two-lane all-weather road to the nearby Kivalliq community.

During its construction phase, the project would employ about 1,000 people, and about 750 people after mining operations start up.

But the network of roads, and their impact on wildlife especially caribou — posed a central concern to Kivalliq residents during the board’s final public hearings, held in Rankin Inlet in August 2014.

A series of restrictions and monitoring efforts — some already adopted in Agnico Eagle’s proposal and others included in the board’s terms and conditions in recommending the project for approval — would help mitigate these concerns.

But the review board also issued a warning to the federal government in its October submission that the various parties — federal, territorial and local — may lack the necessary resources to carry out their monitoring responsibilities.

“The board has serious concerns that limits on the ability of the affected communities and regulators to remain engaged in an ongoing basis with the project throughout its life-cycle will jeopardize the board’s ability to meet the promise of truly ‘setting the standard’ for project development in Nunavut,” the board wrote in its submission to the federal government.

The NIRB made three non-binding recommendations to address this concern, including a capacity assessment of all relevant parties within 12 months of the project certificate being issued.

Agnico Eagle, however, has yet to make a final decision on building a mine at Meliadine, and still operates the site as an advanced exploration project.

The company must also finish negotiating with the Kivalliq Inuit Association on an Inuit impact and benefits agreement, as well as go through a licensing process with the Nunavut Water Board.