“Very disturbing when a cop was killed weeks ago.” 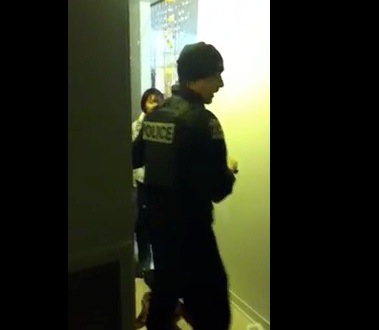 A Kativik Regional Police Force officer attempts to leave a house in a video posted on YouTube and on a Facebook page devoted to news and comments from Nunavik.

Less than a month after Kativik Regional Police Force Const. Steve Dery was killed and his partner injured while responding to a call in Kuujjuaq, a disturbing video from Akulivik reveals the tough environment facing cops in Nunavik.

They’re inside a house that’s filled with people, screams and chaos, as they take a person wearing a red hoodie into custody and then try to leave the dwelling.

“Back off, back up, chaque côté, stay there” can be heard as the 1:34- minute-long video starts.

One police officer pushes at a person grabbing at him as he and his partner try to head down a hallway and out the door with the hoodie-wearing person wedged between them.

“Let go of my baton, back off,” says the same police officer as a teenaged girl later lunges at him and he pushes her off. Off-camera people scream “no reason” and that they’re “scaring kids.” They shout “scary police” and swear as the officers leave.

David Qaqutuk, 30, of Akulivik, who took and posted the video, said the police entered his aunt’s home for no reason and without a warrant.

“They just decided to enter freely because they think we do not know the law,” he said.

It was around 9:15 p.m. when he arrived at the house, Qaqutuk said.

“As I entered, there was a lot of noise inside the house. It was the KRPF being really aggressive towards my cousin who is pregnant,” he told Nunatsiaq News. “I asked one of the officers why they were there, and all he could answer me with was ‘She bit me!!!’ ”

Police should not charge her because they had no right to enter the house before she bit him, Qaqutuk said.

But his decision to post the YouTube video on a Facebook page for Nunavik news, with 1,600 members, (which has since removed the posting and comments) distressed one poster, who said she heard a crying baby in the video and wondered who in the home was taking care of the child.

She also warned him to “not start a movement against the police officers.”

“They serve the public to protect us,” she said, calling the video “very disturbing when a cop was killed weeks ago.”

In the video, she said Qaqutuk, heard at one point during the video, sounds sober, but she also said she could hear him saying,”under age, do not arrest.”

“I am a mother of a 15-year-old teenager,” the woman said. “If my under-age child was drunk, I would want the police to grab my child out of a drunken house. I would hunt down the bootlegger who sold alcohol to under age child.”

Her message: “Let us make sure Inuit children learn to have positive future, like joining [a] dog team race or hockey game or political position,[so that the] high point in life is not drunken lifestyle.”

People in Nunavik who feel like they’ve been treated unfairly by a police officer can call Aileen MacKinnon, the KRPF chief, or fill out a report that is forwarded to Quebec’s ethics commissioner, who then investigates the matter.

Information on how to file a report is posted in each community’s police station or at its employment and training office, MacKinnon has said at public meetings in Nunavik.

Last month, before Dery’s death, MacKinnon also promised more frequent and detailed evaluation of officers who serve in Nunavik, who some criticize as too young and inexperienced to handle the job.

The KRPF spokesperson said the police force would make no comment on the video.