Candidates will participate in Oct. 28 forum 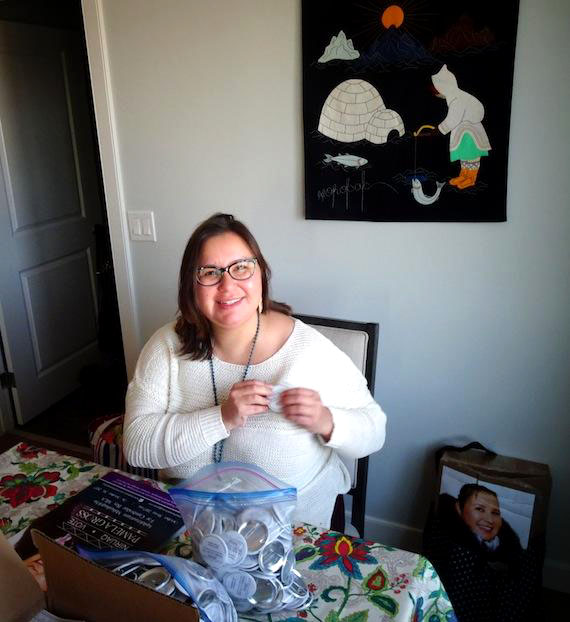 Candidate Pamela Gross organizes her campaign buttons and brochures before heading out to go door-to-door in Cambridge Bay. Gross, a former hamlet councillor, is now on leave from her role as executive director of the Kitikmeot Heritage Society. (PHOTO BY JANE GEORGE) 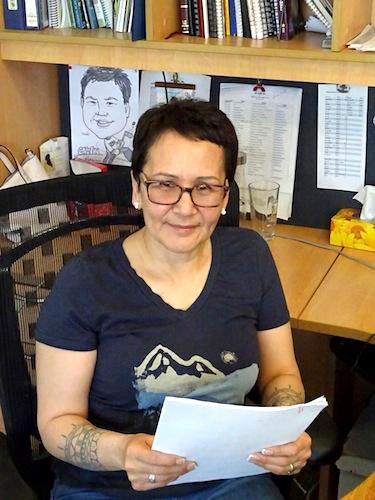 Now on leave from her job in communications at the Nunavut Impact Review Board, Cambridge Bay Mayor Jeannie Ehaloak says that, if she becomes Cambridge Bay’s new MLA, she’s confident the hamlet council and future mayor would carry on her work. (PHOTO BY JANE GEORGE)

Only one thing is certain as voters in Cambridge Bay look to the Oct. 30 Nunavut election—afterwards, they’ll have a new MLA.

That’s because Keith Peterson, who became MLA in 2004, and then cabinet minister in 2008, has decided not to seek re-election.

Jeannie Ehaloak, the current mayor, Pamela Gross, the executive director of the Kitikmeot Heritage Society, and Harry Maksagak, the chair of the Cambridge Bay Housing Association, are contesting the seat in Cambridge Bay, where up to about 600 votes are likely to be cast Oct. 30.

They will all participate in a candidates forum on Oct. 28 at the Luke Novoligak Community Hall from 10 a.m. to noon.

In 2012, Jeannie Ehaloak, then a year into her first term as Cambridge Bay’s mayor, shaved her head, then trekked over the sea ice 200 kilometres from Bay Chimo to Cambridge Bay to raise money for cancer research and to promote healthy living.

“I have the experience. I have the culture and heritage,” she said. “I believe in our youth. I’m reliable, accountable, and I’m transparent. I’ve proved myself and I know I’m ready now.”

In making the jump to the Nunavut legislature, she would be following in the path of Peterson, who served as mayor in Cambridge Bay before becoming the riding’s MLA.

As mayor, Ehaloak, like Peterson before her, headed the Nunavut Association of Municipalities. She also served on the executive of the Federation of Canadian Municipalities, as well as on the CFM’s forum for the territories and remote municipalities and on Nunavut’s infrastructure advisory committee.

Ehaloak said that she doesn’t plan to “campaign on promises.”

“I’m going to campaign on issues that are already there,” she said.

Local issues include reducing homelessness and improving access to housing in Cambridge Bay.

Ehaloak said she couldn’t believe that her community has so many homeless people, with 150 men now on a waiting list for an eight-bed shelter which hasn’t even been open for a year.

She said she wants to see that shelter expanded and to encourage more housing options in Cambridge Bay—such as tiny houses—to put a roof over people’s heads.

Ehaloak also wants to restore support for fuel to Bay Chimo (Omingmatok) and Bathurst Inlet on the mainland. Many in Cambridge Bay call these communities their homes, but they have all relocated to Cambridge Bay over the past few years.

In 2011, the GN withdrew its fuel service to the communities—which had already lost other services—without consulting those affected, Ehaloak said.

“Why didn’t the government tell us they were taking the fuel away? It’s their home,” she said, “Why not give it back so at least they have the chance to go home?”

Ehaloak points to accomplishments as mayor, such as the establishment of a municipal youth advisory committee, the creation of a heritage park and a welding program for youth at risk which produced a giant muskox statue made out of painted recycled metal.

If elected MLA, Ehaloak said she would also like to work on the new Education Act, which died during the final session of the legislative assembly.

And, should the next government decide to approve the opening of a beer and wine store in Cambridge Bay—which voted “yes” to such a store last May— Ehaloak said she would want to see profits put back into community wellness programs.

As one of 17 Nunavut women to put their names forward as candidates in the Oct. 30 territorial election, Pamela Gross says that it will be “nice to see diversity within gender and age” in the new government.

Back in Cambridge Bay, after graduating from the Ottawa-based Nunavut Sivuniksavut program, receiving a bachelor’s degree in anthropology with a minor in Aboriginal studies from Carleton University and completing pre-masters courses in Indigenous government at the University of Winnipeg, Gross, now on leave from her job as the executive director of the Kitikmeot Heritage Society, said she has thought for years about running for office at the territorial level.

“I always said that when I was going to school, it’s for our people,” Gross said.

“So I’ve always wanted to give back to our community. You don’t know if you don’t try, and now is the time. I feel excited about our future and working for our people on a different level.”

Gross recently sat on the Cambridge Bay hamlet council for two years which she said gave her insight into a variety of community issues and pointed to ways to move ahead.

Her trilingual campaign brochure says she’s committed to working on issues that include education, housing, Inuinnaqtun and cultural revitalization, improving food security, setting up a treatment centre, paving the airport runway and roads, and building a recreation centre.

None of the priorities are more important than the others, she said.

“They are all important,” she said.

She sits as well on the boards of Nunavut Sivuniksavut, the Circle for Indigenous Philanthropy and the Victims Assistance Committee, and serves as the secretary-treasurer for Inuit Heritage Trust.

Gross has also found time to study Inuinnaqtun and consider how to renew the language and culture in Cambridge Bay and Nunavut.

She’s been an advocate for Inuinnait and said that, as MLA, “I hope to look forward to doing the same, but on a different platform.”

This month, Gross plans to knock on doors, with buttons and posters, to listen to what people in her community have to say.

Her message to voters: “I would hope that you would vote for me because I’m not only doing this for myself—I’m doing this for our community, and I’m the voice for the community and we’re doing this collectively.”

When you ask Harry Maksagak a question, it’s easy to listen to his melodious voice, which is familiar to everyone in Cambridge Bay.

That’s because when there’s a public meeting or hearing on a community issue, Maksagak is always ready to stand up and share his thoughts and concerns.

Involved in local justice committees and Nunavut’s anti-poverty committee, Maksagak has also been active in setting up a local men’s group.

As current chair of the Cambridge Bay Housing Association, he’s had to make hard choices about who gets the public housing in this housing-poor town.

Maksagak says he’s been the voice on a “lot of social issues that are recognized, seen and felt and heard by all of us, who are concerned, not just those who are running [as MLA], but the whole community in general.”

Maksagak said people now tell him, “I know you work. I see how you engage. I know you are speaking truthfully, because we seeing you doing what you say you will do.”

“They see how I conduct myself. They see my consistency with what I say. And what they say to me now is that ‘you have my support, be our voice,'” he said.

Having unsuccessfully run to become MLA in 2004, Maksagak said he’s running again because he wants to turn his full attention to the needs of his community of roughly 1,700.

Maksagak said his campaign platform is based on social issues and giving people back their “sense of balance” so they can move forward, socially and economically.

With respect to the future wine-beer store in Cambridge Bay, Maksagak said he was at first “adamantly against it,” then he started to view it an effort to stop bootlegging and keep money in households.

“So although I was against it, I am [now] reluctantly in support of opening that.”

If elected MLA, Maksagak said he also wants to work closely with people in Cambridge Bay to encourage education.

“We need to be persistent and consistent with them that they attend classes,” especially in the higher grades, he said.

The former residential school student said students today are fortunate to remain in Cambridge Bay where they can study. 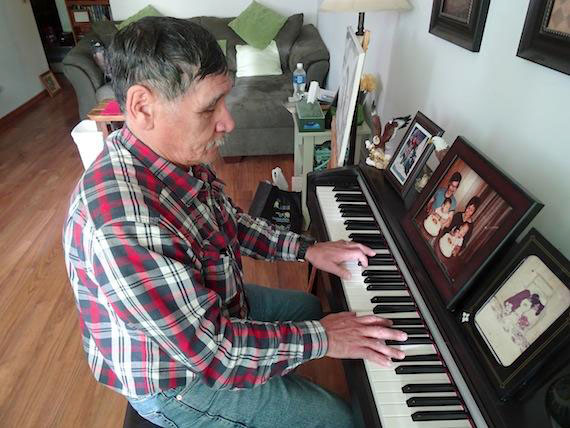 Harry Maksagak plays the piano at his home before an interview with Nunatsiaq News. If elected as MLA for Cambridge Bay Oct. 30, Maksagak wants to concentrate on social issues in the community, where he now serves as chair of the Cambridge Bay Housing Association. (PHOTO BY JANE GEORGE)