“We must constantly raise awareness about these new risks” 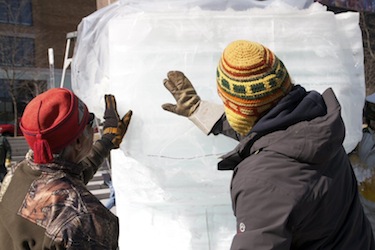 If you’re in Montreal, you can’t hunt polar bears.

But from now until April 21, you can watch a polar-bear ice carving melt.

The “Polar Bear on Thin Ice,” launched last week at the Place des Festivals of Quartier des Spectacles in Montreal, will be on display until April 21 to illustrate the negative impact of climate change on communities and ecosystems in the Arctic.

“Climate change has a significant impact on our everyday activities. For example, our traditional travel routes are less reliable. There are more accidents than before. We must constantly raise awareness about these new risks,” said Eli Eliyassiapik, president of the Fédération des Coopératives du Nouveau-Québec, in a recent news release.

The exhibit, a collaboration between the FCNQ, Équiterre and World Wildlife Fund, centres around a 400-kilogram block of ice that’s covering the life-sized bronze polar bear skeleton created by British artist Mark Coreth.

As their ice carving melts, the polar bear’s skeleton will gradually be unveiled.

“This work is intended to represent the impact of climate change and aims to raise awareness of the urgent need for action,” said Steven Guilbault, Équiterre spokesperson. “This shared north-south project is a great way to demonstrate how connected we all are when it comes to climate change.”

People are invited to touch the sculpture — and watch as it melts — at the corner of St. Catherine St. West and Jeanne-Mance in Montreal until April 21, when the ice bear will be the gathering point for the “Great March for the Earth” on Earth Day, April 22.