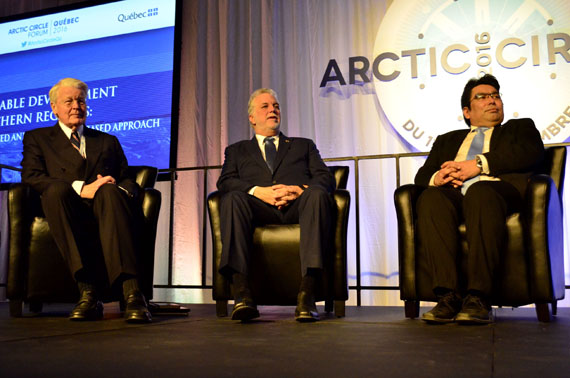 Arctic Circle chair Ólafur Ragnar Grímsson, who served as president of Iceland between 1996 and 2016, Quebec Premier Philippe Couillard, and Vittus Qujaukitsoq, the Greenland minister of commerce, employment, trade, energy and foreign affairs, at the opening of the Arctic Circle Quebec Forum on the morning of Dec. 12 in Quebec City. (PHOTO BY JIM BELL)

And as for Trump’s appointment of oil industry titan Rex Tillerson, the CEO of Exxon Mobil, as United States Secretary of State? Well, that’s good for Greenland too, Qujaukitsoq said.

Though Qujaukitsoq did not refer to Tillerson by name, he said Greenland welcomes an experienced “private sector” figure as the next U.S. Secretary of State.

After the speech, Nunatsiaq News checked with Inuuteq Holm Olsen, Greenland’s representative for the U.S. and Canada. Holm Olsen confirmed Qujaukitsoq had referred to Tillerson.

In multiple global media reports, Tillerson was named as front-runner for secretary of state, the U.S. equivalent to foreign affairs minister. On Dec. 13, Trump confirmed he will nominate Tillerson for the position.

I have chosen one of the truly great business leaders of the world, Rex Tillerson, Chairman and CEO of ExxonMobil, to be Secretary of State.

Tillerson has also spoken out against sanctions imposed on Russia by the U.S., Canada and many western European countries in response to Russian aggression in Ukraine and Crimea.

Qujaukitsoq, a former translator who delivered his Dec. 12 speech in flawless English, said that without revenues from non-renewable resource extraction, including oil and gas, Greenland cannot achieve political independence from Denmark.

“Greenland is an emerging nation. We are in the middle of nation building,” Qujaukitsoq said.

He said that right now, the offshore fishery contributes more revenue to Greenland’s economy than any other sector of the economy.

But that’s not enough to sustain an independent country, which means Greenland must also build up other sectors, such as resource extraction and tourism, Qujaukitsoq said

The new coalition, which controls 24 of 31 seats in the Greenland parliament, has re-dedicated itself to the cause of independence from Denmark.

In an article published this past Oct. 31, the Greenland-based Arctic Journal reported that the first line of the new government’s manifesto says, “Greenland is irrevocably on the path towards independence, and this process demands not just stability, but also national unity.”

Under former premier Kuupik Kleist, the Greenland government pinned its hopes on oil and gas exploration work off Greenland conducted by firms like Cairn Energy of Scotland.

“Companies from the outside have been exploiting natural resources in the Arctic area for centuries now. The Inuit didn’t. Now it’s our turn,” Kleist told reporters in 2011 in Ottawa.

But oil, gas and most commodity prices soon crashed and Greenland’s dream of becoming an independent nation as early as 2021 faded away.

“We want to develop not only to get rich but also to take care of our people,” Qujaukitsoq said, referring to Greenland’s desire to raise revenues for health care, education and social services.

He also took swipes at some other circumpolar players.

The Inuit Circumpolar Council, Qujaukitsoq said, has an old-fashioned view of oil and gas development and has failed to deal with Greenland’s interests.

And he said the Arctic Circle network, founded by Ólafur Ragnar Grímsson, the former president of Greenland, has been more helpful to Greenland than the eight-nation Arctic Council.

As for closer ties with the U.S, Qujaukitsoq spoke fondly of the period between 1941 and 1945 when Greenland became a U.S. protectorate after Denmark was conquered by Nazi Germany.

“The American period in Greenland is remembered as a period of great promise,” Qujaukitsoq said.

The Arctic Circle Quebec Forum is an offshoot of the big Arctic Circle assembly that Iceland has hosted in Reykjavik since 2013 under the chairmanship of Grímsson, who stepped down as Icelandic president earlier this year.

Quebec Premier Phillipe Couillard has been using the Quebec Forum, which opened Dec. 11 and closes Dec. 13, to promote his government’s Plan Nord scheme for sustainable development in Quebec’s north and to portray Quebec as a “Nordic nation.”