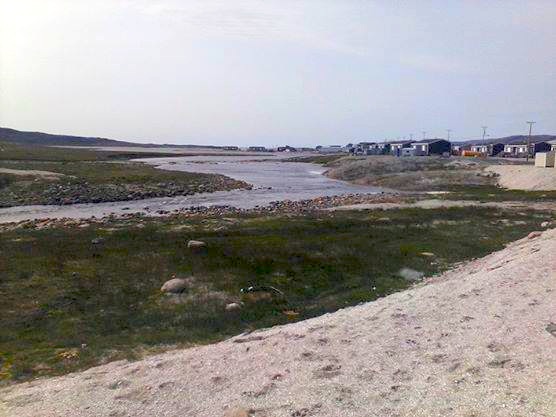 At least five people have drowned in this stretch of the Akulivik river over the last decade. Search and rescue crews are looking for a young man who fell into the river June 15 and hasn’t been seen since. (FILE PHOTO)

Search and rescue crews in the Nunavik community of Akulivik continue to look for a missing man who fell into a local river last week.

Witnesses in the Hudson Bay community say the 20-year-old man fell off a bridge into the Illukotat river on June 15 just after 10 p.m.

Residents alerted local police and first responders, who arrived on the scene to attempt to rescue the man.

A week later, the victim has yet to be located, Kativik Regional Police said June 21.

But search and rescue crews continue to look for the man, who is presumed to have drowned. The community has had help from SAR crews in neighbouring Puvirnituq, Inukjuak and Salluit.

This week, the Sûreté du Québec was bringing in its own equipment to assist in the search.

Over the last decade, at least five local residents have drowned in the Illukotat river, also known as the Akulivik river.

Because of proximity to the community of 600 and its shallow wading areas, the river is a popular swimming spot in the summer months.

Some community members have called for funding to build a swimming pool in Akulivik, where residents can swim under the watch of a trained lifeguard.