Four in 10 Nunavummiut on social assistance 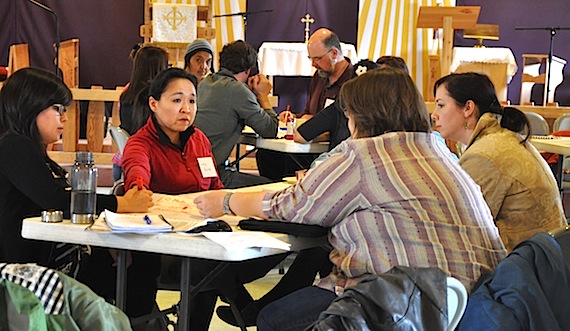 Iqaluit residents take part in a roundtable discussions on food security and poverty in 2011, hosted by Nunavut’s Anti-Poverty Secretariat. A new report commissioned by the secretariat says Nunavummiut are too dependent on social assistance. (FILE PHOTO)

A report on poverty in Nunavut suggests the territory must gradually wean its residents off social assistance, and at the same time beef up income programs and child tax benefits to eventually replace welfare with a new concept called “basic income.”

Those recommendations come from a November report prepared by the Caledon Institute of Social Policy, commissioned by Nunavut’s Anti-Poverty Secretariat to look at the Nunavut social policies aimed at low-income people.

The good news, according to the report, is that Nunavut already has a range of income security programs in place.

The bad news: too many Nunavummiut rely on it.

About four in ten residents of Nunavut are on social assistance, the highest proportion in the country.

“There is something wrong when such a large proportion of the population relies on what is supposed to be a last-resort safety net for a small group of persons who are not eligible for other social programs,” reads the report, titled Poverty and Prosperity in Nunavut.

Welfare typically comes with a stigma, even shame, the report says, although in Nunavut, that’s not always the case. The report notes that some recipients refer to social assistance as “my pay.”

And that can create a disincentive to work, if potential workers prefer the security and stability of a welfare cheque.

Instead, the report proposes that Nunavut’s income security system be rebuilt and focused on programs such as what it calls Basic Income – a type of guaranteed living wage – as well as better child benefits and a refundable cost of living allowance.

The trick, says the report, is seeking to balance the territory’s safety net and what it calls “springboard functions” or initiatives that would build work and learning capabilities.

The report recommends investment in the following areas:

• Affordable housing: in a territory where more than half the population lives in social housing, the report identifies a major need to increase the supply of affordable housing in Nunavut. Some suggestions include exploring a non-profit or co-operative housing model or having resource development companies working in the territory commit to financing housing projects in the communities they are based in. The report also considers providing a rent supplement directly to the tenant, so that assistance moves with the individual.

Although Nunavut has the highest minimum wage in the county at $11 an hour, that still does not reflect the high cost of living in the territory.

The report said even better wages can be promoted by encouraging local employers to move above that and adopt a “living wage” policy.

But Nunavut still needs to revamp its income security, the report notes.

The territory can start by indexing benefits, such as the minimum wage program, the Nunavut Child Benefit or the Territorial Workers’ Supplement and welfare so they reflect the cost of living.

The report shows that the Nunavut Child Benefit in 2013 is worth a maximum $330 per child per year. But had that benefit been indexed to inflation following its creation in 1999, that same maximum benefit in 2013 would have reached $439.

For workers who earn low wages, the report also recommended Nunavut’s Territorial Workers Supplement should increase from its current maximum of $275 a year, to provide better incentives to work and in the longer-term, fewer people collecting welfare.

But in the longer-term, the report calls on the territory to go farther by dismantling the welfare system and replacing it with a basic or guaranteed income program.

In fact, the concept of guaranteed income was already raised during community consultations held by Nunavut’s Anti-Poverty Secretariat in 2010, with suggestions to explore how models work in other countries, such as Norway.

In Nunavut, the program would deliver benefits on a sliding scale to people with low or modest incomes and unlike welfare, a basic income would not force applicants to lose or divest their assets in order to qualify.

“Services — including supplementary health and dental care, early learning and child care, educational upgrading, training and other employment services, and the all-important social housing — should continue to be available to all low- and modest-income residents, regardless of their source of income,” says the report.

“Nunavut already does this; it should maintain this important social policy principle of separation of income and services.”

“Together, these income programs — stronger child benefits, minimum wage, earnings supplements and more accessible employment Insurance — could help prevent and reduce poverty in Nunavut,” the report concludes. “Welfare would, over time, revert to its original purpose as last-resort temporary assistance.”

Poverty and Prosperity in Nunavut was authored by the Caledon Institute of Social Policy president Kenn Battle and vice-president Sherri Torjman.

You can read the report here.