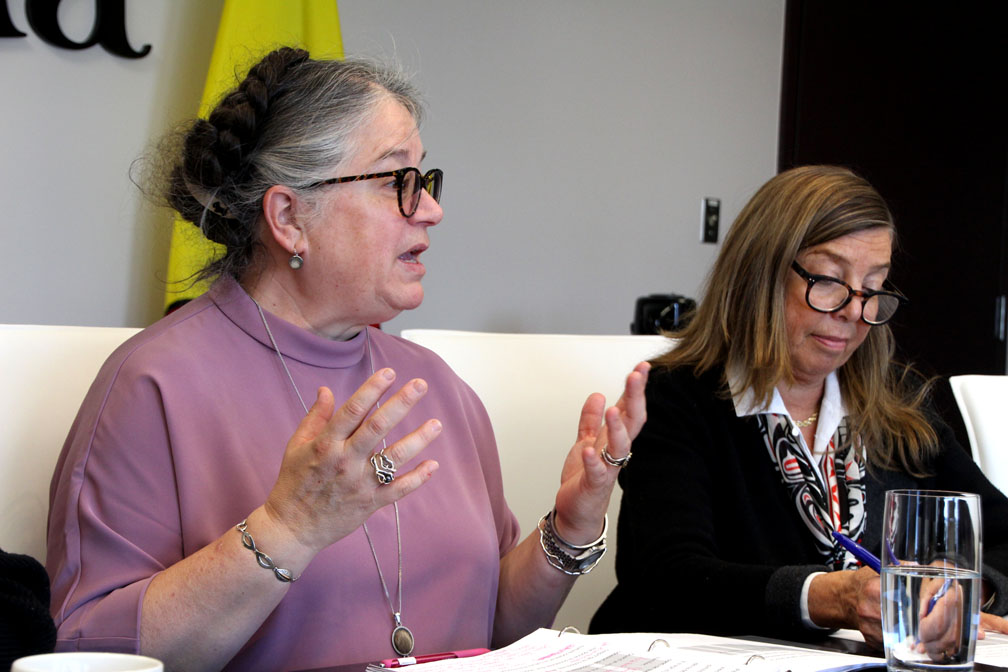 Diane Lebouthillier, the minister of national revenue, at a meeting of business people held April 16 in Iqaluit. (PHOTO BY BETH BROWN)

The Canada Revenue Agency will spend $6 million to set up permanent offices in each of the three territorial capitals, with the aim of helping northern tax-filers get the information they need to correctly complete their returns.

“It is a strategy that is tailor-made to help residents of the territories,” a CRA official said in a not-for-attribution briefing this morning, prior to Lebouthillier’s announcement.

As for long-standing complaints about the CRA’s repeated audits of northern tax-filers, department officials claimed those audits and reassessments often occur because many northern tax-filers submit incorrect tax returns and make mistakes when claiming the northern residents deduction.

“The CRA undertook a review of the northern residents deduction verification activities and determined that the complex nature of the credit makes it difficult for individuals to claim them correctly,” a background documents states.

“All of these activities will ensure that more people can successfully claim the deductions from the first attempt, without unintended mistakes,” the CRA official said.

Another reason is to ensure eligible tax-filers are able to take advantage of federal social programs like the child tax benefit.

The three new tax centres, to be set up in Iqaluit, Yellowknife and Whitehorse between now and the start of the next tax season, will together employ up to 12 workers and remain open all year to help residents with income tax matters.

Also, the department will beef up its community volunteer income tax program in the three territories, and it will offer a liaison officer service for businesses and self-employed people.

During the last tax season, the CRA used 68 volunteers and 32 community organizations for its volunteer program, another CRA official said in the briefing.

“That was a significant increase from the previous year,” the official said.

As for the northern residents deduction, Lebouthillier said the department will soon conduct consultations aimed at simplifying the benefit.

In the first, available to any northerner in a prescribed northern zone who lives in a self-contained dwelling unit, an individual tax-filer can claim $11 for each day they reside in that unit, and an extra $11 per day if they are the only person in the unit.

For Nunavut, that means single tax-filers can reduce their taxable income by up to $8,030.

The second part, a deduction for travel benefits, is available only to northern workers who receive some form of vacation travel assistance from their employer.

The upper limit you can claim on that benefit is the value of the lowest return airfare available at the time of travel between where you live and the nearest southern city.

Northern tax-filers who get no travel assistance from their employer cannot claim the benefit.

But those who do claim the benefit are often confused by the complexity of the deduction, the CRA official said.

“The CRA is also taking steps to reduce the administrative burden associated with the lowest return airfare requirement of the northern residents’ deductions. We will be consulting Canadians on proposed regulatory changes,” the official said in the background briefing.

The creation of CRA’s northern strategy follows a visit to Iqaluit that Lebouthillier made last April to consult operators of small- and medium-sized businesses. During that visit, she was bombarded with complaints about how CRA does its work in the North.

CRA officials had also toured the three territories in 2014 and 2016, leading to a glossy report titled “Serving you Better.”

Numbers derived from the 2016 taxation year showed that in Nunavut, 13 per cent of tax-filers were re-assessed: that’s 2,880 people out of 21,610 tax returns filed from Nunavut that year.

At the same time, re-assessments of northern Canadian tax returns fell by 19 per cent over the past five years, a CRA official said in a not-for-attribution remark.

That represents a tiny proportion of all tax-filers in Canada. In 2016, nearly 28 million Canadians filed income tax returns to the CRA.