“Our level of readiness up there is nil.” 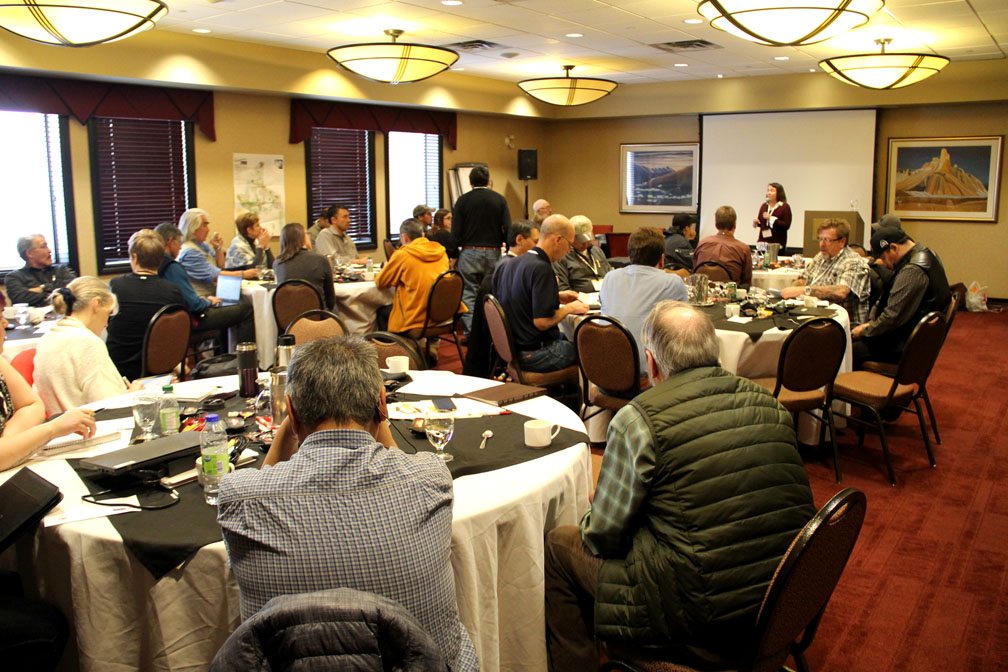 Community leaders from Nunavut and the Inuvialuit settlement region meet with Transport Canada and the Coast Guard, among others, for a learning exchange on oil spill response hosted in Iqaluit last week by the World Wildlife Fund. (PHOTO COURTESY OF MARK BROOKS, WWF)

Should an oil spill happen in the Canadian Arctic, many communities know they are the ones that will have to react first. But residents say they’re not ready.

That’s why residents and leaders from Nunavut and the Inuvialuit settlement region came together in Iqaluit Nov. 1 to Nov. 3 for a learning exchange on oil spill response.

The forum, hosted by the World Wildlife Fund at the Frobisher Inn, included members from Nunavut hunters and trappers organizations, wildlife boards and Inuit organizations, as well as representatives from Transport Canada, the Canadian Coast Guard and the territorial government.

“They said the community would be one of the first responders [to an oil spill],” participant Joadamee Amagoalik, a member of the board of directors for the Resolute Bay Hunters and Trappers Association, told Nunatsiaq News.

Amagoalik said the community, like other communities, has spill-response equipment stored in a sea can by the shore.

But until recently, no one knew where the key was. He said it turned out the RCMP has it.

The sea cans hold response equipment like skimmers and booms.

“I asked, ‘How big are these booms?’, ‘How big of a boat do you need to put these booms out there?’ and ‘What if a volunteer says, ‘You can use my boat,’ and when that boat is damaged, [asks] ‘Who is the one who is going to repair my boat?’” Amagoalik said. “Our level of readiness up there is nil.”

And, because of strong currents in the waters around Resolute, Amagoalik said if there was a spill around his home, nearby communities would be at risk too.

“If I see an iceberg, within about an hour it will be almost in Pond Inlet, just because the current is so fast. If there was an oil spill in Resolute, [then] Arctic Bay, Pond Inlet and Clyde River would have to be notified, just by the fact that the current goes that way.”

Andrew Dumbrille, who handles the Arctic shipping file for WWF, said the information-sharing event was planned after the organization visited Chesterfield Inlet a few years back and heard similar stories.

“We went down to the shore to look at the sea can which was filled with spill-response equipment, and no one in the community had the keys to it. No one knew who to call, there wasn’t a plan or any training, or any liaison or coordination with regulators or shipping companies. That was a really obvious capacity gap in the community,” he said.

But at last week’s meeting, communities learned from Transport Canada that some ways to meet their needs are already in place, “but it’s just not being communicated,” Dumbrille said.

Since funds are currently being prioritized for the federal government’s $1.5 billon Ocean Protections Plan, now is the right time to be having these discussions, Dumbrille said.

“Coast Guard and Transport Canada are taking a lot of notes,” he said.

The meeting also brought in members of Indigenous groups from British Columbia and Alaska who have already designed oil spill response plans.

The advice from John Konovsky, senior advisor for the Tsleil-Waututh Nation in B.C., is make a plan for every community.

And “get it down on paper. That plan is very valuable,” Konovsky said.

He said the Tsleil-Waututh Nation wasn’t included in response plans that happened for past spills in B.C. during the 1970s, and as recently as 2007.

“We put a lot of effort into making sure everyone in Tsleil-Waututh territory understood our government’s rights,” he said.

And a lot of effort into relationships with government and industry is required, he said.

“I talk to the Coast Guard monthly or sometimes even weekly. I don’t get the impression here that the local communities have that kind of contact.”

Tuktoyaktuk’s John Noksana Jr., of the Inuvialuit Settlement Region Fisheries Joint Management Committee, said it was really helpful to hear from groups that are further ahead on the issue.

“It’s good to get their point of view, about what they did and how they did it,” he said. “The biggest thing now is that everyone is on the same page as far as lack of training and infrastructure,” Noksana said.