Stanley Anablak to serve three-year term; only 21 per cent of voters turn out 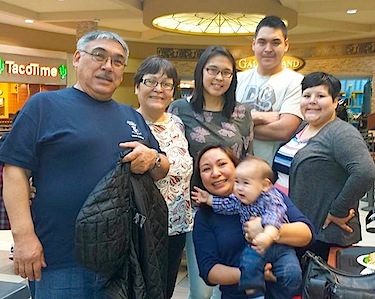 Stanley Anablak, far left, the Kitikmeot Inuit Association’s new president, stands with members of his family in this photo posted on his Facebook page.

The Kitikmeot Inuit Association, which represents beneficiaries of the Nunavut Land Claims Agreement in western Nunavut, will get a new elected president.

Anablak will serve as president until December 2018.

In his campaign materials, Anablak promised to promote programs for beneficiaries, especially for youth and elders, to lobby the government, exploration companies and mining companies to train Inuit for jobs, and to follow up on all KIA resolutions to make sure these are implemented.

Anablak, a former mayor of Kugluktuk, has worked for oil and mining companies as well as for several regional and territorial organizations.

Joseph Aglukkaq, Stanley Anablak, Jeannie Ehaloak, Joe Allen Evyagotailak, Attima Hadlari, Donald Havioyak, Paul Ikuallaq, David A. Porter and Walter M. Porter competed for the position in the byelection which called after Peter Akkikungnaq of Gjoa Haven, elected this past December, dropped out before he was even sworn in.

The overall voter turnout March 30 was dismal — about 21 per cent — and lower than in the Dec. 18, 2014 election where up to 34 per cent of the 3,638 eligible voters in some Kitikmeot communities cast ballots.

Inuit who are Canadian citizens, 16 years of age and older, and enrolled or eligible to enroll under the NLCA were eligible to vote.

But as voting results indicate, few bothered to go to the polls: