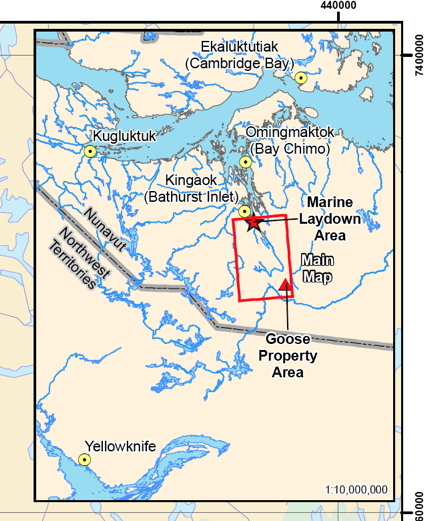 This map shows the location of the Sabina Gold and Silver Corp. Back River gold mine in western Nunavut. (FILE IMAGE) 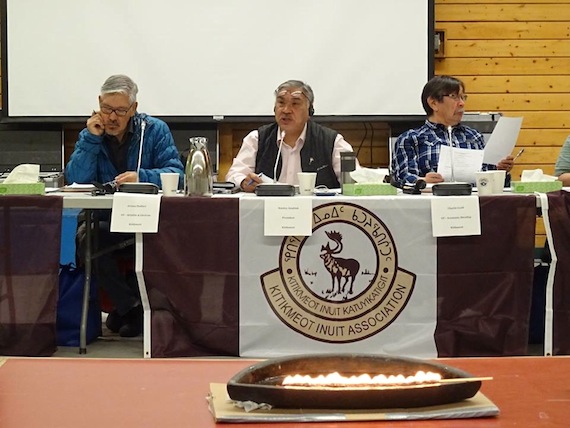 Kitikmeot Inuit Association President Stanley Anablak speaks at the annual general meeting of the organization, which took place Oct. 16 to Oct. 18 in Cambridge Bay. Near the end of the AGM, Anablak shared the news that the KIA had reached agreement on the terms for the land tenure and Inuit benefits for the Back River gold mine project in the Kitikmeot region. (PHOTO BY JANE GEORGE)

CAMBRIDGE BAY—–The Kitikmeot Inuit Association, which represents Inuit in western Nunavut, can look forward to a cash injection if a proposed gold mine becomes a reality.

The KIA and Sabina Gold and Silver Corp. announced Oct. 18 that they had signed off on the terms for a comprehensive agreement for Sabina’s Back River mine project.

The deal spells out the company’s rights and obligations with respect to surface land access on Inuit-owned land and will include an Inuit Impact and Benefit Agreement.

The terms also come with a promise of millions of dollars, starting with the signing of the final agreement, likely to happen early in 2018.

The KIA is already receiving money from TMAC’s Doris North gold operation at Hope Bay, which has given the organization a surplus of more than $9 million, according to its most recent financial statements.

“On behalf of the KIA board, I am pleased to announce the signing of this binding term sheet,” said Stanley Anablak, president of the KIA. “We believe we have negotiated terms that focus on the interests of Inuit of the Kitikmeot region providing them with training, employment, business opportunities and direct economic benefits from the Back River Project.”

Sabina’s plans for Back River—which were first rejected by Nunavut regulators due to concerns over impacts on caribou—include a chain of open pit and underground mines at its Goose property.

After an initial investment of $415 million, Sabina hopes to produce about 200,000 ounces of gold per year. As for its gold reserves, on Oct. 19 the company also reported positive results from its 2017 drilling program.

But first federal ministers have to respond to the NIRB’s latest final hearing report.

“If the ministers accept the board’s report and recommendation that the project should be allowed to proceed, the next step would be development of a project certificate by the NIRB and establishment of a monitoring program for the development,” said the NIRB’s executive director Ryan Barry in an email to Nunatsiaq News.

The comprehensive agreement between the KIA and Sabina, when completed, will last for a maximum term of 20 years and include among others, the following key provisions and agreements, according to a release circulated Oct. 18 at the KIA’s annual general meeting in Cambridge Bay:

• an initial investment of $4 million in regional wealth creation initiatives in the Kitikmeot region, “$2 million of which could occur following execution of definitive agreements, and the remainder no later than upon a production decision, with additional payments commencing the third year following commercial production if Sabina-related employment targets are not achieved;”

• an annual payment to the KIA of up to $1 million to cover KIA’s cost of implementing the agreement;

• land use licenses which would permit Sabina to conduct non-exclusive exploration work at Back River;

• commercial leases authorizing the development of mines and related operations and closure activities at the Goose Property;

• a one per cent net smelter return royalty paid to the KIA on production at Back River on the properties that are subject to a commercial lease;

• an Inuit Impact and Benefit Agreement, or IIBA, setting out commitments associated with Inuit employment, training and education, Kitikmeot business opportunities, formation of an Inuit Environmental Advisory Committee and investments in community infrastructure projects with the objective of supporting regional wealth creation initiatives within Kitikmeot communities;

• a grant of 6.7 million Sabina shares to the KIA upon the effective date of the IIBA; and,

• water and wildlife compensation agreements including additional payments if Sabina fails to implement caribou mitigation commitments regarding calving and post-calving periods made to the Nunavut Impact Review Board.