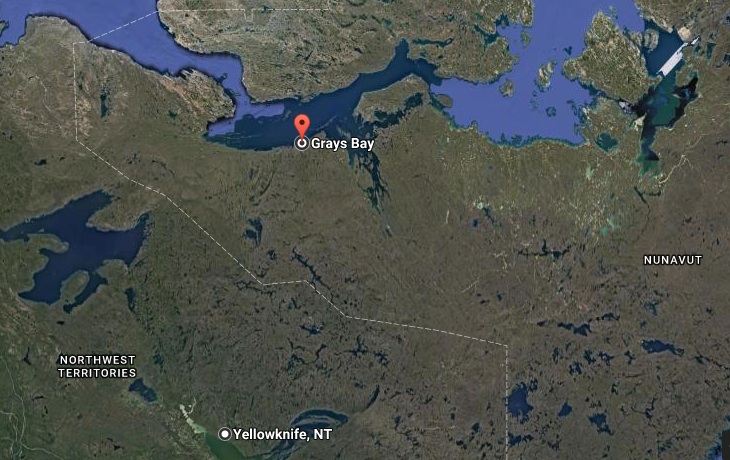 This map shows the location of Grays Bay in Nunavut, located some 800 kilometres north of Yellowknife in the Northwest Territories. Nunavut and the N.W.T. would like to see a road someday link up the two, opening up mining development along the way—but there’s a lot of concern about caribou, which a full environmental review under the Nunavut Impact Review Board will look at. (IMAGE/GOOGLE MAPS)

“The board has indicated to the responsible minister(s) that the proposed project should undergo further assessment best facilitated through a full environmental review,” the NIRB said.

The NIRB’s screening decision contained stern words about the project, which it says has “the potential to cause significant adverse effects on the ecosystem and may be a cause of significant public concern.”

The NIRB cited many reasons for doing a full review, including the importance of allowing members of the public to provide comment.

The 89-page screening decision looked at the proposed $500-million project—160 kilometres east of Kugluktuk and 290 km southwest of Cambridge Bay—which will include a road, port, camps, airstrip, deepwater port, a small craft harbour, a wharf and more.

Chief among the impacts that the review will look at is “the potential for this project to contribute to cumulative impacts on caribou populations.”

The proposed project would take place in habitat considered critical for the health of caribou, “specifically the Bathurst herd.”

So the NIRB said it will be important “to demonstrate to the affected communities and the public generally that project components have been adequately evaluated and appropriately mitigated.”

A hunting quota of 30 caribou was proposed in July, pending a community-based management plan.

Cumulative impacts of the project also need a close look, the NIRB said.

That’s because other nearby projects—such as TMAC Resources Inc.’s Hope Bay gold mine or Sabina Gold and Silver Corp.’s Back River gold mine project—may not use Grays Bay’s infrastructure.

The Government of the Northwest Territories also raised many concerns about the potential impacts of Grays Bay on the habitat and population of transboundary wildlife.

The Kitikmeot Inuit Corp., which is a co-proponent of the project along with the Government of Nunavut, says it supports a full NIRB assessment because government money won’t start to flow until there is environmental approval.

The GN allotted $2 million in 2016-17 to get the Grays Bay environmental review process going.

Nunavut hopes to eventually secure federal funding to cover a big chunk of the project’s cost. Until then, the project’s plans could change—or become shelved, as happened with another plan to build mining infrastructure in the region.

Sabina and Glencore Corp., the two mining companies that own another transport proposal called the Bathurst Inlet Port and Road project, decided earlier this year to keep their proposal in the deep freeze for at least one more year, if not longer.

Conceived in the late 1990s by a group of proponents, including Inuit-owned companies, BIPR has long been touted as a way to supply mines in the interior of the western Kitikmeot and to ship base-metal ore to market.