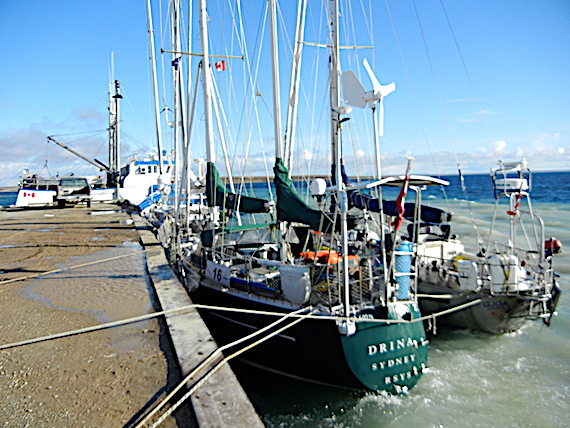 In early September, the dock in Cambridge Bay is lined with vessels of all sizes. With the new marine information system, tracking traffic in the Northwest Passage will become easier. (PHOTO BY JANE GEORGE)

The western Nunavut community of Cambridge Bay is among seven coastal communities in Canada that will test out a new marine information system.

The new system will provide near-real time data on local ship traffic, the federal government said in a news release on Wednesday.

That’s something that many in Cambridge Bay, at the gateway to the Northwest Passage, have cited as a need.

The system will be one of the largest procurement projects in the Government of Canada’s history, the release said, with Indigenous and coastal communities, Transport Canada and the Canadian Coast Guard working together to award the contract.

Ottawa also plans to make $9.8 million available over two years to develop, test and evaluate the new systems in Cambridge Bay and the other communities selected.

The Oceans Protections Plan, unveiled Nov. 2016 by three federal government departments, targeted the Arctic, among other coastal regions, for big, overdue improvements in safety, especially in increased protection from oil spills and other marine emergencies.

• $94.3 million over five years to support “safer and more efficient Arctic resupply operations” through more safety equipment and basic marine infrastructure—and the training of local people to operate these.

• $16.89 million over five years to establish Transport Canada’s Office of Incident Management, which will modernize and standardize the department’s incident response processes, with a new incident command system.

• The expansion of the Canadian Coast Guard Auxiliary in the Arctic, which will see eight new vessels provided to volunteer groups to respond to incidents.