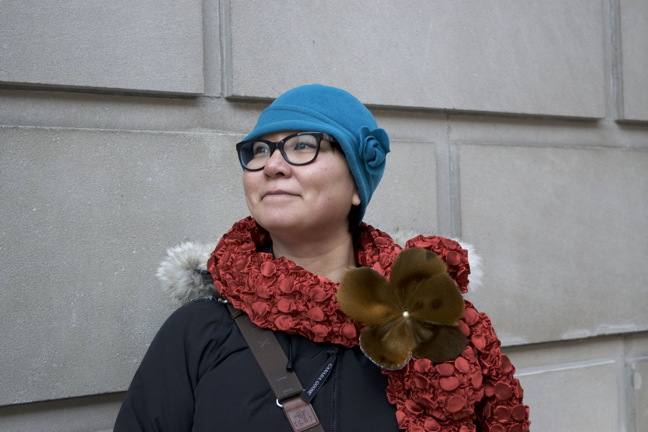 Oo Aqpik models a sealskin adorned scarf she made. Aqpik’s works are part of the Studio Sixty Six gallery’s “Kanata 150?” exhibit, on now in Ottawa. (PHOTO BY COURTNEY EDGAR)

OTTAWA—Oo Aqpik started to make art when she lived in Winnipeg and working on the film, Arctic Defenders, with the National Film Board.

She didn’t have many friends there besides her co-workers so she spent a lot of her spare time watching Bob Ross on television and learning to paint with acrylics. But rather than rendering fluffy clouds and trees, she used his techniques to paint Arctic plants and figures from Inuit legends such as Sedna.

“It got serious after Bob Ross,” she said.

Since then Aqpik, has branched out to other media—sewing and designing accessories. She can’t sit still, she said, explaining that she often gets a “little lightbulb” and then thinks, “Oh, I want to do that,” flitting back and forth between several projects at once. Her latest obsession is with sealskin.

With a background in multimedia and communications, Aqpik has a wide variety of hobbies and interests. However, the world of commercial art is still relatively new to her.

Aqpik has produced acrylic paintings for about seven years, and colourful seal skin accessories since 2011—selling them mainly from her Facebook account or through word of mouth. But the Kanata 150? art show, currently on display in Ottawa, marks the first time her works have been featured in an art gallery. And she’s a hit already.

“I try to make things that are a little more contemporary then headdresses,” Aqpik said of her sealskin work. She sometimes gets inspiration from non-fur accessories in fashion magazines which she later recreates with seal skin. She first started with sealskin flowers and then made a sealskin tiara with glass pearls.

“The idea of joining Kanata 150? was proposed to me so I made the crown for Sedna specifically for that show,” she said.

And it was the first of her items to sell, on opening night at the gallery. Soon after, Aqpik sold two other pieces including one she just happened to bring with her and wasn’t even on display.

Aqpik’s creations are a bridge between her desire for beauty and reconnecting with her culture after moving south. And they allow her to explore and assert her own identity.

“At first I shied away from bringing up the fact that I am Inuk and wearing sealskin,” Aqpik said, “in fear of retaliation and violence because we are brown. I think finding myself, my own voice, as well really helped.”

Conversations with her nephew, who attends the Nunavut Sivuniksavut college program in Ottawa, also helped her find that voice.

“I was feeling more oppressed so out of spite I would talk about what had happened and he told me that instead of being angry we needed to create dialogue,” Aqpik said. “We are still very much deprived of our culture, if you will.”

Having grown up attending residential school, she missed out on a lot of important cultural knowledge and history.

“No one really explained who Sedna was,” Aqpik said. “We have to read it from an anthropological point of view, in books.”

So a lot of her paintings are of Arctic goddesses or ancestors in traditional wear.

“It is my way of expressing my yearning for that culture,” Aqpik said.

“We divide each other when we point out our differences instead of thinking, ‘Wow, she is Canadian, too.'”

The Kanata 150? exhibit at Studio Sixty Six is a response from Indigenous artists to the 150th anniversary of the Dominion of Canada.

“I had felt that Canada 150 failed to include a very important part of Canada’s history—which is that of Indigenous peoples,” said Rose Ekins, the exhibit’s curator and organizer.

This exhibit’s opening drew the largest attendance the gallery has ever seen, with a few hundred guests crowding into the small space in Ottawa’s Glebe neighbourhood.

Four works sold on the first night, three of which were Aqpik’s.

“She sold a sealskin flower, the Crown for Sedna and the Flower Crown,” Ekins said, adding the gallery will soon carry more of her work, including sealskin bow ties.

“She is unaware of how talented she is,” Ekins said. “She nearly left the show. She was convinced nothing would sell. I was overjoyed to tell her when she walked in that we had already sold one.”

According to Ekins, artists often fall into two basic categories: those with an underdeveloped ego and those with the opposite.

When Ekins told her about her first sale, Aqpik appeared shocked—happy but shocked.

“She was also so pleased when another crown was sold and the buyer informed her she would be wearing it, often,” Ekins said. “Oo’s works are stunning sculptures in themselves but they are also functional, purposeful.”