“I always have confidence in our public government institutions” 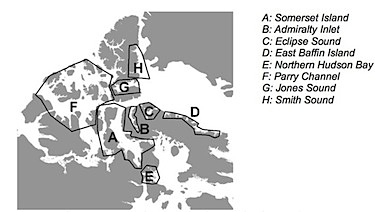 The Department of Fisheries and Oceans wants to study the narwhal populations in Jones Sound and Smith Sound management units before setting quotas.

James Eetoolook, a vice president of Nunavut Tunngavik Inc., says he has confidence that the Nunavut Wildlife Management Board will make the right decision on the draft narwhal management plan proposed by the Department of Fisheries and Oceans.

The NWMB, which held public hearings last week in Iqaluit on the Narwhal Integrated Fisheries Management Plan, will make the final call on the plan. Then, the NWMB’s recommendation will likely be submitted to the DFO minister in mid-August. After that, the DFO minister has 60 days to accept or reject the recommendation.

“We’re allowed to appoint half of the eight board members on the NWMB. I always have confidence in our public government institutions created through our land claims agreement,” Eetoolook said.

However, Eetoolook doesn’t have confidence in the DFO’s proposal.

“I think the DFO [should] start taking Inuit concerns very seriously, because we are the harvesters, we live with animals, and we have served them more often than what their science would have served them,” he said. “In a lot of ways there’s a lack of Inuit Qaujimajatuqangit in this plan. I think it is very important to include the IQ versus science.”

Eetoolook cites Grise Fiord as an example of where science conflicts with Inuit knowledge. For the region around Grise Fiord, the DFO said there’s not enough data from the area to set a quota.

“While there’s narwhal migrating right through the town, they don’t have any more tags. The population’s not going to be affected if they allow Grise Fiord, say, 50 tags,” Eetoolook said. “I think Grise Fiord needs special attention, because they were imported up there by the Canadian government, and they were promised that wildlife would be plentiful. But there’s not. There’s lots of narwhal, lots of seals, but they lack caribou and fish. And they have to go long way in order to harvest those.”

At the hearings on July 24, Joseph Justus, a senior fisheries and aquaculture management officer, said it’s important to restrict total allowable catches in Grise Fiord to show that, internationally, there is harvest management of narwhal in Nunavut.

“In the interim, it’s to protect international trade in Nunavut. When we do have appropriate info, the board will then have some info to make reasonable decision,” Justus said.

The Convention on the International Trade of Endangered Species is to meet in Thailand in March of 2013. Narwhal have been listed since 1979 on Appendix II of the CITES agreement.

And for narwhal exports to continue, Canada must show that allowing the export of an Appendix II species is not detrimental or harmful to the survival of the species.

“It’s kind of hard sometimes, when the scientific report says otherwise. But at the end of the day, it boils down to what Inuit already know,” said Eetoolook who wants t see a three-year trial period for the DFO’s plan, followed by a review.

But the DFO opposes that recommendation.

Despite their differences, Eetoolook thinks NTI and the DFO are coming to an understanding.

“The relationship is improving all the time, because the DFO wants to include Inuit Qaujimajatuqangit.”