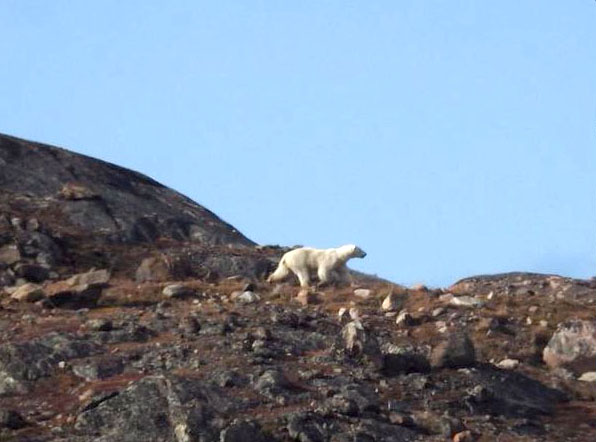 This polar bear was spotted near Iqaluit in September 2015. Territorial wildlife officers in Iqaluit shot and killed a polar bear July 23 after the animal wandered into a camp site at Sylvia Grinnell Park. (FILE PHOTO)

Territorial wildlife officers shot and killed a polar bear which, in the early morning hours of July 23, wandered into a camp site at Sylvia Grinnell Park, damaging three or four tents.

The incident marks the first sighting of a polar bear near Iqaluit this year.

Officers shot and killed the bear at approximately 5:15 a.m., between Sylvia Grinnell Park and the Iqaluit airport, after they determined the bear could not be scared away.

“If we tried to scare the bear, we could have pushed it back towards the campsites,” Neely said.

The four-year-old male polar bear, about seven feet in length, was butchered under the supervision of an HTO elder at Iqaluit’s Wildlife Management office.

The meat was delivered to elders around Iqaluit, with the remainder donated to the elders group home.

Neely said he believed the bear entered the area from the far end of Sylvia Grinnell Park, as sealift operations would have deterred the bear from entering closer to Iqaluit.

The bear damaged three or four tents. These tent owners can apply for compensation under the Wildlife Damage Compensation Program at the Department of Environment, Neely said.

If you spot a polar bear, please contact the Wildlife Management Division at 867-975-7900.