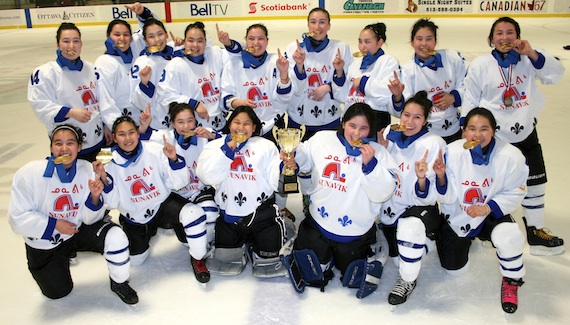 The Nunavik Nordiks show off their gold medals, won at a tournament held last weekend in Ontario. (PHOTO COURTESY OF SARAH AIRO)

Communities throughout Nunavik celebrated the return of their hockey heroes this week.

Joyful fans welcomed back members of the Nunavik Nordiks midget girls team in their home communities – from Inukjuak to Kangiqsualujjuaq– for winning big at an Ottawa tournament.

“They greeted them at the airport with fire trucks,” team supervisor Sarah Airo laughed, referring to the welcome players received in Kuujjuaq and other communities.

The team’s big win at the tournament, which took place March 22 to March 24 in the Ottawa suburb of Kanata, was remarkable for the short time it took them to form a winning team — but managed to do — thanks to the Nunavik Youth Hockey Development Program.

Selected during two weekend try-out camps last fall in Kuujjuaq, the teenaged girls came together as a team for the first time in mid-March, when coach Joé Juneau, a former National Hockey League star player and Olympic hockey champion, took them through a weeklong training camp.

The teens would not actually compete together as a team until their arrival in Ottawa just before the tournament, playing four exhibition games in as many days.

“It’s incredible to know that Nunavik [Nordiks midget team] had not played a single game this season before getting to Ottawa on March 18,” said Juneau who established the hockey development program for Nunavik youth almost seven years ago.

Unlike the Nunavik girls, most other players in the Kanata tournament play organized hockey all season long.

“It’s really exceptional what they were able to accomplish as a group,” said Juneau.

As a supervisor to the team, Airo said she witnessed the team’s fast progress throughout the tournament.

Coach Juneau’s message “was always ‘never give up, try harder, this is what you did great, this is what you need to improve,’” said Airo. “They caught it really quickly and they tried harder the next game. And it showed that these girls were really determined. All the players were unique and it was really fun to watch.”

The team went undefeated through four games, right up to the final against the Sudbury Coyotes. The score stood at 1-1 down to the last five seconds, when Harriet Cain of Tasiujaq scored the game-winner for the team.

“It was very intense,” said Airo. Though far from home, the Nordiks drew on the support of many fans, she said, including former Nunavik residents and supporters from an Ottawa team they had beaten earlier.

Airo credited the hockey development program for the girls’ hockey success, and more broadly, for its positive effect on the youth of Nunavik. by linking hockey to healthy living, good nutrition, physical activity and education.

“It’s not just about hockey,” Airo added. “They learn more about positive behaviours – how not to give up, being responsible for yourself, for the team. Showing respect, even if they lose.”

Beyond the hockey rink, the program has worked to instil these lessons in school classrooms as part of the curriculum.

“Many of us don’t see what’s happening behind the scenes,” said Airo. Teachers and coaches involved in the hockey program “teach players about leadership and life skills.”

That’s the message that the hockey program had in mind.

“Kids need structure. The message they were getting from the hockey program, and continue to get it is be positive, and do well. And even if you make a mistake, try again.”

Nordiks veteran player Lucinda Gordon of Kuujjuaq was happy to part of the first girls’ team to win a major tournament outside of Nunavik, and thanked the youth hockey program for making it possible.

“I have learned a lot of things during the four years I was involved with the program,” she commented through Facebook. “It feels really good to go home with a medal in my last year with the girls.”