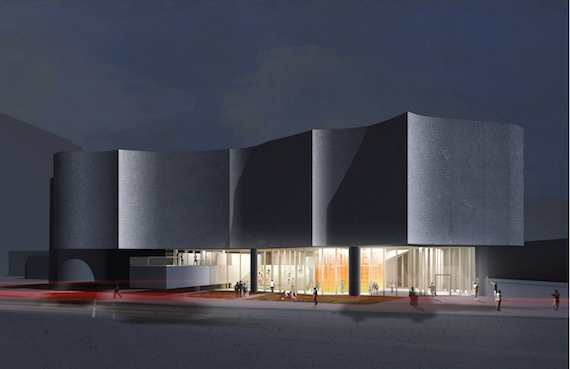 The rendering of the future Inuit Art Centre at the Winnipeg Art Gallery shows what the centre will look like at night from the street. (IMAGE COURTESY OF THE WAG/ MICHAEL MALTZAN ARCHITECTURE)

The Winnipeg Art Gallery is $10 million closer to building its Inuit Art Centre.

Cathy Cox, Manitoba’s minister of Sport, Culture and Heritage, announced on Tuesday, Dec. 19, the province’s long-awaited contribution of that amount over five years for the 3,700-square-metre Inuit Art Centre, which will be located adjacent to the gallery near downtown Winnipeg and a short walk from the Legislative Assembly of Manitoba.

“The Manitoba government is excited to be a partner in this project that will house the world’s largest collection of Inuit art and create an innovative programming hub down the street from our legislative building that will surely improve our province’s cultural infrastructure, promote tourism and generate economic development,” Cox said in a news release.

The centre’s ground-breaking is expected to take place soon, with the aim of completion by 2020, on Manitoba’s 150th birthday.

Stephen Borys, the gallery’s director and CEO, said that, when finished, the Inuit Art Centre will “highlight the province as an international cultural destination.”

With the $10 million from Manitoba, the project now has $50 million committed from all three levels of government, as well as from the private sector.

The gallery plans to rally more support for the centre as a way to foster reconciliation.

”As Manitoba and Canada seek meaningful reconciliation, the Inuit Art Centre offers a path to dialogue and understanding between Canada’s North and South, and indeed across the country and beyond. It will be a platform for Inuit who use art as a voice and language to celebrate their stories with the world,” Borys said in a news release.

When finished, the new centre will be home to “the largest public collection of contemporary Inuit art on earth”—about 14,000 pieces, according to the gallery’s website.

When entering the Inuit Art Centre, visitors will be greeted by a huge glass atrium at street level, where a three-storey transparent vault will showcase 7,500 Inuit carvings.

“Students will come face-to-face with exciting new learning possibilities as virtual technology connects them to classrooms across the North. From here, they can watch a carver working in Baker Lake and listen to stories being told by an elder from Arviat,” says the website for the centre.

From inside the theatre, visitors will also be able to see the centre’s collections and the carving porch, where artists will be working.

In December 2015, as part of a five-year deal, the governments of Nunavut and Manitoba agreed to spend $1 million to move more than 7,000 pieces of Inuit art—much of which have been in storage for years—to the gallery.

These will be returned to Nunavut when the territory eventually builds its own heritage centre in Iqaluit. That project received millions of dollars this year from Inuit organizations. 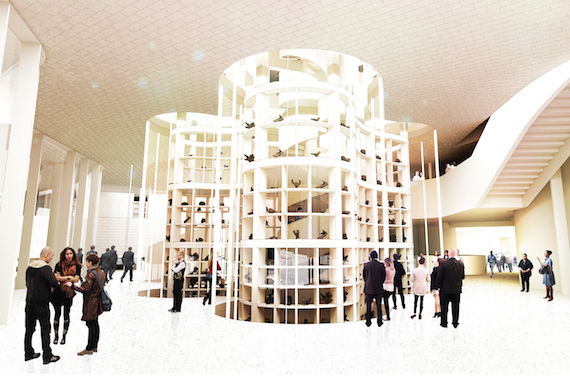 This rendering shows what’s called a “visible vault,” which will display Inuit carvings inside the future Inuit Art Centre at the Winnipeg Art Gallery. (IMAGE COURTESY OF THE WAG/ MICHAEL MALTZAN ARCHITECTURE)