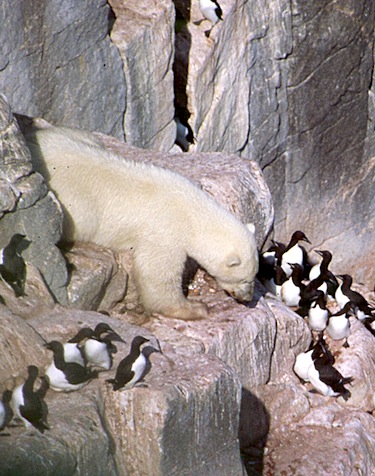 A polar bear finishes off a nest of murre eggs after scaling a cliff on Coats Island to get at them. (PHOTO BY KENNY WOO) Kyle Elliott holds a murre chick on Coats Island where he and other researchers have found many dead chicks, decapitated by polar bears. (PHOTO BY KENNY WOO)

The black-and-white birds, known as akpait in Inuktitut, have to fend off polar bears and killer mosquitoes as climate change alters their ecosystem and invites other species to the places theses migratory birds once ruled.

More polar bears are drifting on to Coats Island, the island Inuit know as Akpatordjuark, located in northern Hudson Bay, and the polar bears are arriving earlier in the summer because they spend less time on sea ice as the ice melts earlier and more rapidly every year.

And because the bears don’t eat as many seals as they used to out on the sea ice, some are replacing their diet with murre eggs by pillaging the nests.

“Not this season, but last season, we figured they eliminated a third of the population of murres,” said University of Manitoba doctoral student Kyle Elliott, fresh off Coats Island as part of the study undertaken by Environment Canada, the Garfield Weston Foundation and the University of Manitoba.

The polar bears also ate a lot of chicks.

“They just seem to come along and bite the head off, and leave the rest. So you’ve got all these chicks littered around with no head,” Elliott said.

That’s not all. Elliott has been working on the 32-year-long murre study for a decade now — and 2013 marks the first season during which mosquitoes were also killing the murre chicks.

“In the hot days, [mosquitoes] kill some of the birds. In 2011 we had a really warm year, and this year as well there were lots of mosquitoes … and they killed the chicks for the first time,” Elliott said.

To top it off, the murres’ main source of food — the big, extra-fat Arctic cod that belugas, narwhals and ring seals usually snack on — is being replaced by capelin, fish which are about one-third the size of char and usually found around Newfoundland waters.

“Capelin is a fish common around Newfoundland. All these Newfoundland fish are moving in,” Elliott said.

That’s changing how the murres are growing, Elliott said.

“It’s like if you feed off of McDonald’s instead of a nice healthy dinner, you’re not going to grow as well,” Elliott said. “[The] chicks don’t grow nearly as well.”

Moreover, Elliott said other birds, also from Newfoundland, razorbills, are following these capelin into Nunavut waters and making their way to Coats Island.

The murre isn’t the only species on Coats Island which researchers keep their eyes on.

The presence of polar bears has grown so much over the past few years that in 2012, researchers had to stop their work because they felt it was unsafe.

“In 2011, it was not a fun season, because you’re always worried about these bears,” Elliott said.

“One time I went down to set a rope, and I was feeding the rope and my gun was a little ways away. And all of a sudden, I looked across and there was a [polar] bear sleeping 50-feet away.

“If it wanted to stalk me, I would have had a hard time [escaping],” Elliott said.

“There’s lots of cliffs and stuff, it’s not like a flat plain where you can see a bear from a mile away. It’s really easy where you could get surprised by a bear,” he added.

Elliott said that, when he started, seeing a polar bear on Coats Island was rare: but in 2011, he said there were about 50 “bear days.”

So no studies were done in 2012. But this year, 2013, it was business as usual as the sea ice lasted longer, which meant fewer polar bears came ashore.

But the polar bear situation could jeopardize the whole three-decade-plus study if the animals continue onto the island as they have during previous summers.

That’s an issue, because Elliott argues the scope of the research goes way beyond studying the murres.

“They’re a bellwether for everything happening,” Elliot said. “These [birds] are a signal that the whole ecosystem is changing and that the Arctic animals are in trouble.”

Although murres are at a healthy population level and remain one of the most numerous birds in Canada — 100,000 birds strong on Coats Island alone — with the dangers that roam around the island, Elliott said he wouldn’t not surprised if the murre population decreases in the future. The preferred diet of murres is Arctic cod, but now these are often scarce and the murres subsist on less nourishing capelin. (PHOTO BY KENNY WOO)