“Peter was pretending to shoot Mappaluk” 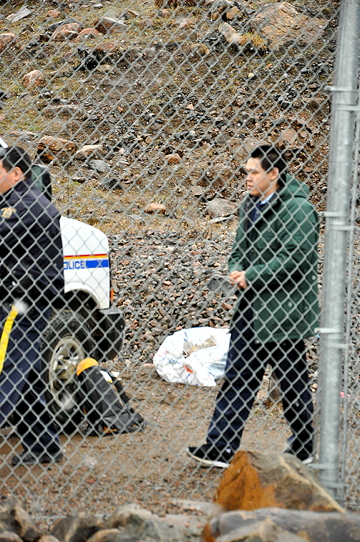 Peter Kingwatsiak of Cape Dorset leaves court on June 22, day one of his first-degree murder trial in Iqaluit. (PHOTO BY THOMAS ROHNER)

That’s what Kingwatsiak’s living step-brother, Etidloi Adla, a Crown witness, said before Justice Bonnie Tulloch on the second day of Kingwatsiak’s first-degree murder trial at the Nunavut Court of Justice in Iqaluit June 23.

“Peter was pretending to shoot Mappaluk [Adla] in the head while shooting at a rock,” Etidloi said.

“He took about five shots.”

Kingwatsiak is currently standing trial on two charges: the first-degree murder of his step-brother, Mappaluk Adla, on Sept. 20, 2010 and one count of breaking and entering to commit an indictable offence for entering his uncle’s house and assaulting him.

In previous stories, three charges have been reported but , the third charge — aggravated assault against his uncle — is called a “lesser but included charge,” to the break and enter offence.

On June 22, the court heard this trial is about intent: whether Kingwatsiak was capable of forming the intent to kill his step-brother when he shot him in the forehead; and whether Kingwatsiak had legal permission to enter his uncle’s house before slashing his uncle in the face with a knife.

The court also heard June 22 that Kingwatsiak has already admitted to shooting and killing Mappaluk, and to cutting his uncle in the face.

The Crown’s first witness in the judge-alone trial, forensic psychiatrist Dr. Philip Klassen, began his testimony on June 22 and finished in the morning of June 23.

Klassen testified that despite Kingwatsiak’s repeated sniffing of gasoline fumes on Sept. 20, 2010, the psychiatrist found no evidence to suggest the accused couldn’t appreciate the seriousness of his violence when he shot and killed Mappaluk.

Kingwatsiak had “not been a problematic member of the Cape Dorset community” before killing his step-brother, Klassen said June 23, but his troubled youth resulted in a “latent vulnerability… around the issue of attachment and relational security in intimate relationships.”

Klassen said that vulnerability took the form of anger towards Mappaluk, who Kingwatsiak viewed as a competitor in his “infatuation” for a girl, Geena Rose Lampron.

A few days before shooting and killing his step-brother, Kingwatsiak saw Mappaluk and Lampron at a dance, after which Kingwatsiak suspected the two had slept together, “creating the unstable love triangle,” Klassen said.

Etidloi said he heard Kingwatsiak say he was going to shoot his brother Mappaluk on two occasions before Sept. 20, 2010.

But defence lawyer James Morton, during cross-examination, pointed out that in his original statement to the RCMP in November 2010, Etidloi didn’t mention the rock-shooting incident.

The incident “came back to me shortly after I gave my statement, but I didn’t come forward,” Etidloi said June 23.

It wasn’t until a whole year later, in a second statement to the RCMP, that Etidloi told police about the rock-shooting incident.

“Do you want Peter [Kingwatsiak] to be convicted of murder?” Morton asked during cross-examination.

“I’m going to suggest to you that the reason you didn’t mention the shooting at the rocks when you talked to police back in 2010 is because it didn’t happen. You only mentioned it a year later when you thought about the case,” Morton said.

The nephew, after mumbling incoherently, followed his uncle into the house’s furnace room, and then slashed his uncle in the face with a knife his uncle reserved for cutting country food, Manu testified.

“I still get chills from that day. It still hurts me,” Manu said.

“I’m gonna have the scar for the rest of my life now.”

After cutting the right side of his uncle’s face, Peter Kingwatsiak walked away and then headed back in the direction of his uncle, flashing the knife, Manu testified.

“I just gave him a hug and luckily [Peter Kingwatsiak] put on his shoes and left the house … Before I hugged him I told him I loved him,” Manu said.

When Manu asked his nephew why he cut him, “he just said, ‘somebody told me to do it,’” Manu testified.

Before this incident, Manu said his nephew had never been violent towards him. The uncle also said his door was not locked that night, and his nephew did not force his way into the home.

After leaving his uncle’s house, Manu saw his nephew head in the direction of Mappaluk’a home.

Peter Kingwatsiak has admitted to killing his step-brother shortly after leaving his uncle’s house.

At the end of the day’s proceedings, members of Mappaluk’s family, including his mother, cried and hugged each other in the courtroom. Lawyers left the courtroom to give the family privacy.

The third day of the trial is scheduled to begin June 24. Peter Kingwatsiak’s best friend at the time of the incidents is expected to testify.

On June 25 the accused is expected to testify in his own defence, Morton told Tulloch.

The trial is expected to wrap up June 26.