“Women are doing what they can to survive” 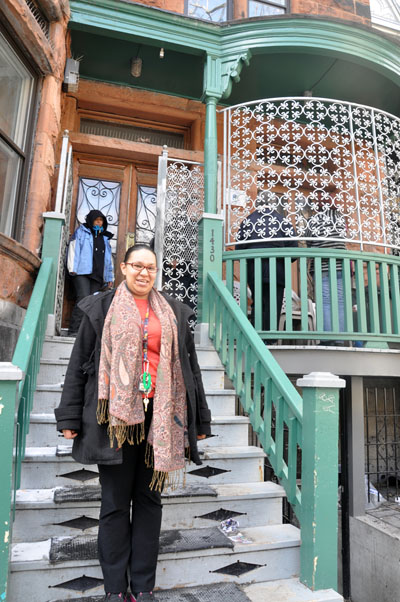 Tina Pisuktie is the Inuk outreach worker at Chez Doris women’s shelter, where 15 per cent of clients identify as Inuit. (PHOTO BY SARAH ROGERS)

That’s no surprise to outreach worker Tina Pisuktie, who works with Inuit women out of Montreal’s Chez Doris day shelter.

She says Inuit women’s homelessness is often “hidden” — making it hard to calculate their number.

“Many of the women I work with won’t admit they’re homeless, because saying this puts you in a vulnerable situation to begin with,” Pisuktie said. “And many are clean, well-dressed and educated, so you wouldn’t know.”

In one common scenario that Pisuktie sees, women stay up through the night and come to sleep at Chez Doris when it opens in the morning.

Pisuktie said women who may have had trouble finding housing of their own make an arrangement to temporarily live with someone else, generally a boyfriend.

And sometimes, that arrangement can be focused around what Pisuktie calls “survival sex.”

“What I do know is that women are doing what they can to survive,” Pisuktie said.

Inuit may find sex difficult to speak about, Piskutie said, so it’s hard to know the full impact of those arrangements on women who are already in vulnerable situations.

And Pisuktie admits that whatever support those men provide to her clients is more than she can provide after 3:00 p.m., when Chez Doris closes its doors for the day.

“Women won’t say that they’re sex workers… but you’ll hear ‘I have sex with him in order to stay at his place,’” Pisuktie said.

“There’s no real evidence that this is what’s happening though, so it’s hard to address because of the way it’s framed in the lives of these women.”

In preparing his report on homelessness, Kishigami interviewed 75 Inuit who use shelters or job support services in the city.

His survey found a higher proportion of Inuit men living in the city’s streets.

But while Kishigami found a greater number of homeless men than women, his research suggests the number of at-risk Inuit women in Montreal is actually greater.

Another report, released earlier this year drew attention to the plight of many Inuit women from Nunavut.

Many urban Inuit, having relocated to Ottawa, reported experiences of baiting and exploitation to perform forced sex work, often at the hands of a common-law partner, boyfriend or pimp.

Helen Roos, chair of the Ottawa Coalition to End Human Trafficking compiled dozens of stories alleging sexual exploitation and human trafficking in her January 2014 report, suggesting the issue could be widespread among Nunavut Inuit.

But outreach workers in Montreal say they see little evidence of actual trafficking among Inuit women in the city — the majority of whom from Nunavik.

Stella, a Montreal organization that advocates for the rights of sex workers, does not view sex work itself as harmful, as long as women give their consent, and is lobbying for its decriminalization.

Stella’s goal is to ensure that women have the tools they need to work in a secure environment, and to help them leave sex work if and when they choose.

Anita Schoepp, an outreach worker with Stella, has worked with the Inuit community for almost a decade, enough to see the challenges that Inuit women face transitioning from the North to the South.

“I do see a lot of women migrating to Montreal and getting involved in sex work,” she said. “A lot of women on the street will exchange intimacy for other material goods, to feed an addiction or for a place to stay.”

But Schoepp is careful about using the word “trafficking,” which she feels can been taken out of context.

“Trafficking implies coercion and forced labour,” she said. “I see women working with associates, but I also see them breaking away from this when they need to.”

“When we see women in sex work where there is control [by a third party], we consider that conjugal violence,” she added. “And we definitely see relationships of this sort, but they are a minority.”

Every week, Schoepp visits areas in the city’s downtown that homeless women are known to frequent, like Cabot Square, armed with a bag.

In it, she carries tools like clean crack pipes, syringes and condoms, to prevent the spread of life-threatening illnesses like AIDS and hepatitis.

“This is something we’re known in the park for,” she said. “And over the course of several years, people will slowly divulge their needs.”

But Schoepp said what Inuit women on Montreal’s streets need most is some form of housing. For many Nunavimmiut, the lack of housing drove many Inuit from the North in the first place.

“They need formal housing in any way, shape or form — maybe supervised, and something specific to the Inuit community,” Schoepp said. “When people have a home, they have more control and more calm in their lives.”