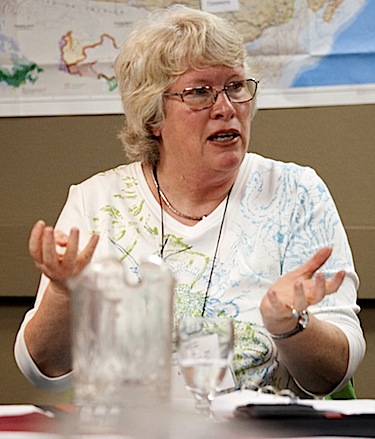 Lyda Fuller, executive director of the YWCA shelter in Yellowknife, shown here at a recent meeting of shelter directors from across Canada, says women and children from Nunavut’s Kitikmeot region account for many of the clients at the shelter and transitional living units in Yellowknife. (PHOTO BY BILL BRADEN)

Women from Nunavut’s Kitikmeot communities who escape violence at home fill half the beds at the YWCA shelter in Yellowknife, says its executive director, Lydia Fuller.

Over the course of a year, these Nunavut women and their children account for about half of the occupancy at the 12-bed Alison McAteer House shelter and for more than a quarter of the residents at its 39-unit Rockhill transitional and emergency transitional housing unit, Fuller said.

“We turn away as many as we take,” she said.

After division of the Northwest Territories in 1999, Fuller said the numbers of Nunavut women staying at the shelter dropped.

But, since then, these numbers have increased.

Many women who want to stay at Yellowknife’s shelter — but can’t due to lack of space — are NWT residents, prompting some residents to question why Nunavut continues to fill beds needed by the NWT.

Most women who are sent to Yellowknife from Nunavut go there because the city offers the support services they can’t find in the Kitikmeot — and they can stay for up to six months.

After their stay at the shelter most go home, and some move into transitional housing.

Many women don’t want to return home, but to another community. But the Government of Nunavut, which picks up the tab for their flights and shelter stay in the NWT, insists they return to their home communities, Fuller said.

Those who go home return to the same community and the same violent spouse, subject to what Fuller calls “domestic terrorism.”

Women at Yellowknife’s shelter come mainly from the region’s smaller communities, Taloyoak and Kugaaruk, she said.

But although Cambridge Bay’s Wellness Centre operates a shelter, it’s mainly used for emergency purposes and shorter term stays of up to six weeks.

The Wellness Centre only receives enough GN funding to operate the shelter for five days a month, although women who need shelter are never turned away, said Wellness Centre director Marie Ingram.

But a woman fleeing violence in the Kitikmeot has few options in the region: Kugluktuk’s shelter, closed for more than a year, is now in the process of reopening, while Taloyoak’s shelter has been shut since 2009 due to lack of money and damage caused by frozen pipes.

Nunavut has only two other shelters now operating in the territory, in Iqaluit and Rankin Inlet.

Iqaluit’s YWCA Agvvik operates the 21-bed Qimaavik Transition House and the 12-bed Sivummut House for homeless women and their families from the Baffin region.

The Kataujuq Society operates the three-bedroom “safe shelter” in Rankin Inlet, which takes clients from the Kivalliq region, plus Sanikiluaq.

Their directors, along with directors from shelters and transition houses from across the country, visited Yellowknife Sept. 20 to Sept. 22 for a pan-territorial and national meeting of women’s shelters.

For shelter directors from the South it was “an eye opener” to hear about the grisly levels of domestic violence in Nunavut, which are up to 13 times higher than in southern Canada, according to 2010 figures from Statistics Canada.

“But the whole North has more [domestic] violence than the rest of Canada,” Fuller said.

Some communities seem to be caught up in a circle of violence, and brutality against women is commonplace, she said.

And women don’t even dare to talk to each other about it, she said.

That’s why the YWCA shelter in Yellowknife is launching program to encourage women to get together in more remote communities, a strategy which is also being picked up in the Baffin region and in Cambridge Bay where the Cambridge Bay Wellness Centre plans to hold “ladies evenings.”

Directors from the five NWT shelters also meet every other month, Fuller said.

To date they have responded to the government’s draft standards for shelters and created common policies and procedures on shelter operations.

Along with shelter directors from Yukon and Nunavut, the northern shelters are considering forming an official pan-territorial shelter network like the ones in the provinces, Fuller said.