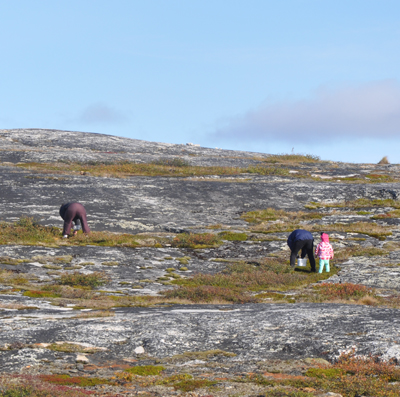 Women picking berries outside of Kuujjuaq earlier this month. (PHOTO BY SARAH ROGERS)

Saturviit Inuit Women’s Association of Nunavik says it will collaborate with its provincial counterpart to better understand the circumstances of missing and murdered women in the region.

Amidst the ongoing call for a national public inquiry into Canada’s missing and murdered indigenous women, the Quebec Native Women’s Association has already begun collecting information from the province’s Aboriginal communities.

The survey has three objectives:

• to evaluate the magnitude of the crisis and the issues specific to the region;

• to learn the impacts and course of action taken by victims and survivors; and,

• to hear what concrete actions can be taken to prevent violence.

At a meeting of the Kativik Regional Government council earlier this month, councillors made a push for more data and focus on missing and murdered women from Nunavik.

There are no statistics compiled on the number of Nunavimmiut women who have been murdered.

“We’d like to know how many women have disappeared or been murdered. This is something we’ll ask for and make a priority.”

Because of the North’s geography and climate, Inuit women rarely go missing, although many face violent situations at home, and a number in those situations have been murdered.

“Maybe the survey can help highlight some of the problems we have in the region,” Hervé said.

Saturviit’s directors have raised a number of issues they say Nunavimmiut women are facing, Hervé said: the prevalence of rape — even against physically and mentally handicapped women — and the isolation those victims face in small communities with few resources.

Another issue Saturviit directors have raised is the issue of violence against children; Hervé said one of Saturviit’s goals is to push to see child advocacy centres in the region.

But Saturviit, a tiny organization run by just two staff and a board of seven directors, doesn’t have the funds or the manpower to oversee major projects.

Saturviit hope to have its surveys completed by spring 2015, in time for the Quebec Native Women’s Association to publish an overview of the challenges facing Quebec’s indigenous women.

At the same time, Saturviit is already working to compile other data on the living conditions of Nunavimmiut women through a Laval university research project.

A researcher interviewed more than 100 women in eight communities throughout 2013 to learn more about the different aspects of women’s lives — from parenting, to family relationships, education and food costs.

“The question of violence will be discussed,” Hervé said. “It will reflect women’s condition, their perspective and priorities.”

Saturviit, which is itself funded through the KRG, the regional health board and Quebec’s Secrétariat à la condition féminine, offers funding for community-based initiatives that can benefit women.

The organization has also extended its nomination period until Sept. 30 for potential new board members. Saturviit plans to hold an election Oct. 7.